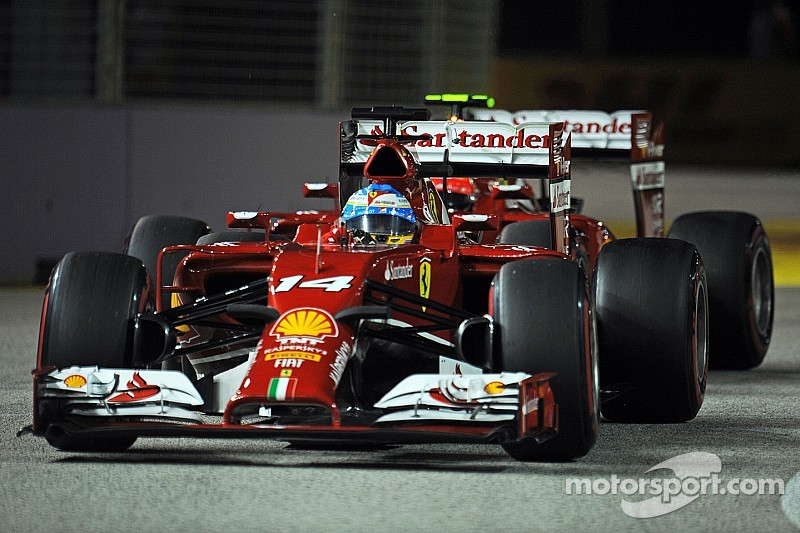 Singapore, 21 September – Having run competitively all weekend from the very first practice session on Friday, Scuderia Ferrari ended the fourteenth round of the World Championship with Fernando Alonso taking the chequered flag in fourth place and Kimi Raikkonen crossing the line eighth.

Overall I’m pleased with this weekend, because we were competitive and were able to fight with the front runners.

As the camera flashlights popped in the grandstands when the red lights went out, Fernando produced one of his trademark starts, his F14 T rocketing from his customary fifth on the grid to second behind Lewis Hamilton. Admittedly he was helped in this by the fact that the Englishman’s Mercedes team-mate Nico Rosberg left a hole on the front row as he had to start from pit lane. The German retired after a few laps, thus handing the title lead back to race winner Hamilton.

Fernando unfortunately outbraked himself at the first corner, which allowed Sebastian Vettel, who had got past Red Bull team-mate Daniel Ricciardo at the start, back into second place. From then on, Fernando’s competitive pace saw him in permanent contact with the leaders and on lap 24 when he made his second pit stop, he managed to get the jump on Vettel, undercutting the German to lie second behind the untroubled Hamilton.

But then the Safety Car, a fickle beast that can be your friend or your enemy, dashed the Spaniards hopes. It came out on lap 31, after the front wing of Perez’ Force India shattered, sending debris flying everywhere. The Ferrari strategists reacted, bringing both its drivers in for a final pit stop, leaving them 30 laps to run to the flag on new Soft tyres.

I’m not happy with eighth place, but on the positive side, we have seen improvements this weekend.

However, the two Red Bulls gambled on staying out and ran very long to the flag, proving impossible to pass, thus leaving Fernando unable to exploit his new tyres and making fourth his best possible finish. Kimi had a tougher time, with traffic, usually in the shape of a faster Williams and also suffered with high degradation, eventually having to settle for eighth.

So there was plenty of tension to keep the crowd enthralled, even if the final order of the top four was the same one as at the end of the opening lap, Hamilton in the Mercedes, Vettel and Ricciardo in the Red Bulls and Alonso fourth for Ferrari. In between the Spaniard and his Finnish team-mate, were Massa for Williams, Vergne an impressive sixth for Toro Rosso and Sergio Perez seventh for Force India.

However, the encouraging message for the Scuderia and its fans is that the general pace of the F14 T was much better than in past races and now we head to one of the great challenges on the calendar, the splendid Suzuka circuit and a very different type of a track to this one.

Marco Mattiacci: “Today’s race could have delivered us a better result, because thanks to a quick response from the team after the disappointing outcome of the Grand Prix in Monza, we were competitive all weekend long. Our pace was good and thanks to the strategy, with Fernando we managed to run second, but it later slipped from our grasp during the course of the race.

Kimi was held up by traffic and slowed with tyre degradation and, although he got a good start, he was unable to retake the places he had made up. The variable of the Safety Car altered our strategy projections, affecting the outcome of the race. Nevertheless, I firmly believe that the only strategy for winning is to be able to count on a competitive car.

Now we leave Singapore having shown signs of progress: on this front, Suzuka will provide a very interesting test bench, because it will allow us to go deeper into our development work in areas in which we want to improve.”

Fernando Alonso: “With hindsight, it’s easy to ask oneself how things would have gone if I hadn’t made a mistake at the start and the Safety Car hadn’t come out when it did, but overall I’m pleased with this weekend, because we were competitive and were able to fight with the front runners. Sometimes, a Safety Car can help but I think that today on this front, we were a bit unlucky, because at that moment, we were trying to make sure of second place and our strategy was good.

We didn’t have much of an alternative, because if we had stayed out, the probability was that the stop for the Softs would have cost us more places. Even if in the end, I wasn’t able to get past, the fact we were competitive right to the finish confirms we have made a step forward. Now, in Suzuka, a real circuit, we will have a clearer picture of where we are.”

Kimi Raikkonen: “Today’s race was really frustrating, because despite the fact we were quick, we weren’t able to finish where we wanted. My start was good, I moved up a few places and everything was working perfectly. After the first stop, I lost a place to Felipe and from then on, I found myself stuck behind a Williams for the entire race. Unfortunately, every time I managed to get close, I lost aero performance on the rear and on top of that, tyre degradation was very high.

It’s a real shame I was never able to run my race, even if we already knew that straightline speed is our opponents’ strong point. I’m not happy with eighth place, but on the positive side, we have seen improvements this weekend. I’m sure that if, from now on, we don’t have problems, things will go better.”

Pat Fry: “Here in Singapore, the performance of the two F14 Ts was a pleasant surprise, as we have never been as close to the front runners this season. The technical characteristics of the track, our development work, the talent of our drivers and the way our car worked on the softer tyres are just some of the elements that explain our good form this weekend. While very encouraging, it was still not enough to achieve the team’s objectives and it was a real shame to see second place slip from our grasp with Fernando because of the Safety Car.

Unfortunately, with Kimi we didn’t manage to get the most out of the car: he had the potential to get a better result, if hadn’t been for Massa undercutting him and then, even though he was on fresher tyres, he did not have the top speed to pass Bottas on the straight. Like Monaco, this is a track where it’s hard to overtake and the arrival of the Safety Car can jumble up the order. Now, in Suzuka, we will have another opportunity and once again, we will try and fight the Red Bulls and especially the Williams in the Constructors’ Championship.”