Sirotkin says Hamilton did nothing wrong in Q2 near-miss 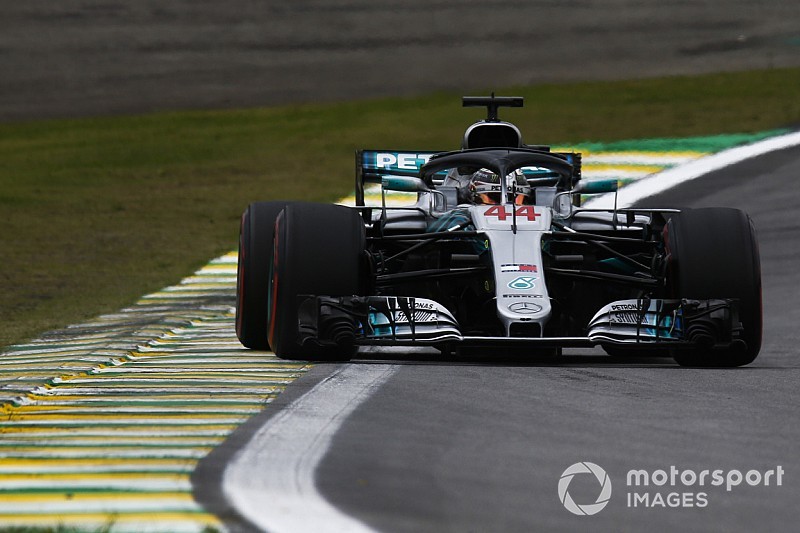 Sergey Sirotkin says Lewis Hamilton did nothing wrong in their near-miss during qualifying for the Brazilian Grand Prix.

The Russian came close to a big crash at the start of Q2 when his Mercedes rival moved into his path as he closed rapidly in on him in the final sequence of corners.

Although Hamilton was upset about the situation – saying that Sirotkin should not have tried to pass him ahead of their qualifying runs – the Williams driver has explained that he had no choice but to go so fast.

He said that, having unexpectedly made it through to Q2, Williams had no new tyres available for him so he had to run with a used set from Q1, which had not been pre-heated.

"They were minus-27 degrees compared to the delta, so I had to push very hard all the way around," he said.

"I was still pushing all the way through Turn 11 and he [Hamilton] was very slow preparing for his lap.

"Because I was coming so quickly, I didn't expect him to give me the room as we were both on out-laps.

"I had such a big speed difference with him, that I just moved myself to the left to get through and, at the last minute, he saw me and tried to move.

"I was like 200km/h quicker than him at that point on the left so it was quite difficult to get around and to avoid the contact.

"But again I don't think there is anything he did wrong. It was just the situation that I had to push, which was quite unusual for the out-lap, but these things can happen."

Although Hamilton blamed Sirotkin for triggering the incident by being "disrespectful" in overtaking on an out-lap, the Russian has strongly denied that is the case.

"I would disagree," he said. "I think if you look generally at what I am doing on track, there are not many other drivers who pay so much respect, especially to the leading cars that I know are fighting for the title.

"There are not many people here who respect him as much as I do. It was my situation, I just needed to push it all the way to the end to get some temps in it, even though I think I would never make it enough.

"There was no solution for me to slow down and cruise to his speed for the last quarter of the lap."

Asked if he was surprised that Hamilton had not been investigated for the incident, Sirotkin said: "I am not surprised. It is very normal. It has just been a unique situation that you never really find often.

Daniel Ricciardo said Sirotkin did nothing wrong in overtaking Hamilton on an out-lap because there was no hard and fast rule about how drivers should behave.

"I feel there is like a bit of an understanding most of the time, but... yeah, none of us have ever agreed to it," he said.

"I guess we kinda feel, look, if we respect them, then when they're in that position next time they'll respect me. It's kind of a - I'll be nice this time, you'll probably be nice in return down the track."

Update - Sirotkin was later handed an official reprimand for driving too slowly on his in-lap in Q1.

He explained that he had been letting other cars past him, and there appeared to be some discrepancy between what his dashboard was telling him and what the FIA reading was.

So while he believed he was inside the maximum time, that was not how his time was judged.

The FIA stewards noted that: "While the driver did exceed the delta time on his dash, it appears that the majority of the time was due to a setup error. The Stewards found that the regulation was breached and ordered a reprimand."

This is Sirotkin's first reprimand of the season.