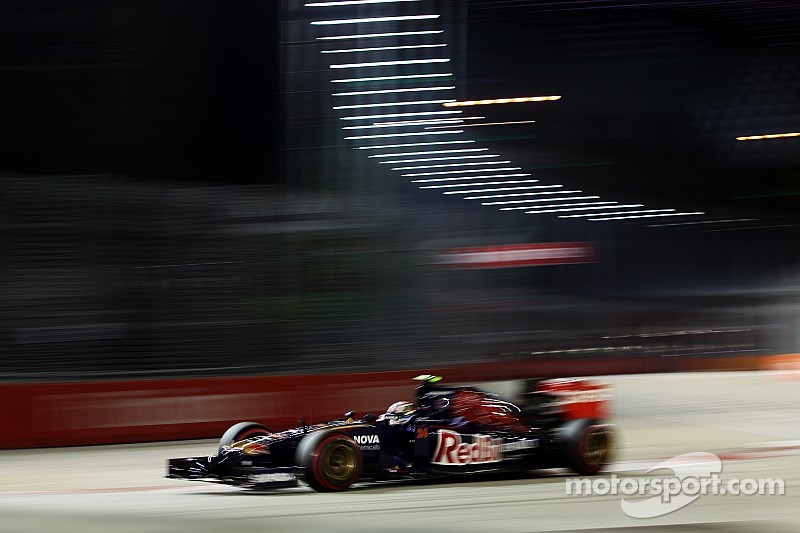 In a fantastic race, Jean-Eric Vergne managed to finish more than the 5 seconds ahead of the seventh placed driver!

Jean-Eric Vergne (Position: 6th): "It feels great. It was a fantastic race and I'm extremely happy, especially considering the two 5 second penalties. I had to push as much as possible in the last laps and pull away and this is what I've done. I had a lot of fun overtaking the ones in front of me, an incredible race.

I did a mistake yesterday in Qualifying and I said to the team that I would have done everything for them to forgive me today and I think I could manage it in the end. So I'm really happy also for the guys, they gave me a good car and the 6th place repays their big effort, we deserved it.

I'm really confident we can have a good end of the season together and I'm looking forward to Japan, where we also have some updates. Hopefully we can improve even further."

Daniil Kvyat (Position: 14th): “It was a very tough race today in which I had to fight more with myself than with the cars around me. The car was quite difficult to drive and it was sliding a lot. It was also hard work to take care of the tyres. Unfortunately I also had a problem with my drink system, so I was without water for the whole race, which definitely made it a much tougher race. I think points could have been possible, so well done to JEV, who did a great job today!"

Phil Charles (Chief Race Engineer): “We are very, very pleased! JEV drove an absolutely fantastic race. He had to deal with two 5 second penalties, but having taken his first, with the second we knew the time would be added on at the end, so we kept him informed of the gap to those behind him, after he pulled off some brilliant passing moves and he managed to finish more than the 5 seconds ahead of the seventh placed driver, so he keeps his sixth place.

He did absolutely everything right. The team worked very well today and everything generally went to plan, with the strategy working out well, so we are all very happy for JEV. He has been due a decent result, because he’s been doing a good job this year, but has had more than his share of bad luck.

Daniil was particularly unlucky as he had a drinks bottle problem right from the start, so it was a physically very difficult race for him, as he was unable to drink and was getting dehydrated from quite early on. We’re sorry for him that we had that kind of problem, as it compromised his race.”

Ricardo Penteado (Renault Sport F1 track support leader): “An amazing result for JEV, who fought back hard from qualifying and two penalties during the race. Daniil struggled without hydration in this very physical race and did well to get to the end. The Power Unit worked well over the race and energy management on JEV’s car in particular was very good, allowing him to use his newer tyres at the end to gain so many positions. It was a perfect finish for a difficult weekend.”