Five months after selling Spyker F1 to Vijay Mallya and former company managing director Michiel Mol, the Dutch boutique sporscar manufacturer is getting back to its feet. 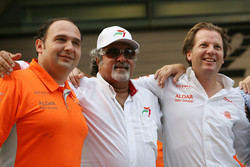 The adventure at the top level of auto racing nearly drove Spyker into bankruptcy, dropping the company's cash reserves dangerously low when the team's sponsors did not come through with the payments they had committed to.

"Formula One turned out to be a massive bleeder, losing 2 million Euros a month because some sponsors did not pay," Spyker CEO Victor Muller said in an interview Automotive News Europe. "This drained our production capital."

At the end of its Formula One saga, Spyker's operating capital had been drained badly enough that it could not pay its suppliers, dropping its production to just two cars in December. Subsequent to the sale of the company to Orange India Holdings, a venture founded by Mallaya and Mol, Spyker also refinanced the company, receiving some 35 million Euros in additional operating capital.

Spyker sold the team to Orange India for $124 million, somewhat higher than the $106 million purchase price from Midland F1. However, with the operating losses the team incurred as Spyker F1, the venture could not be considered a profitable one for the company -- and the cost of financing an F1 team was unjustifiable for a boutique manufacturer such as Spyker.

But the company survived the "F1 scare," and is more or less back to business as usual. February production will be back to near normal levels, and Muller is visiting Spyker dealers to rebuild trust in the company's ability to deliver cars.

Meanwhile, Mol, who got Spyker involved in F1, has reportedly sold his remaining 11.9% stake in the firm. Gemini Investments Fund of Latvia took an option in Mol's stake in late January, and reportedly Mol and Gemini have completed the transaction, closing the books on the Mol era.

Where next for Formula One: Can a two-tier system ever work?

Sakon Yamamoto to be reserve driver of HRT