Risk-averse Haas "got away" with intermediates call 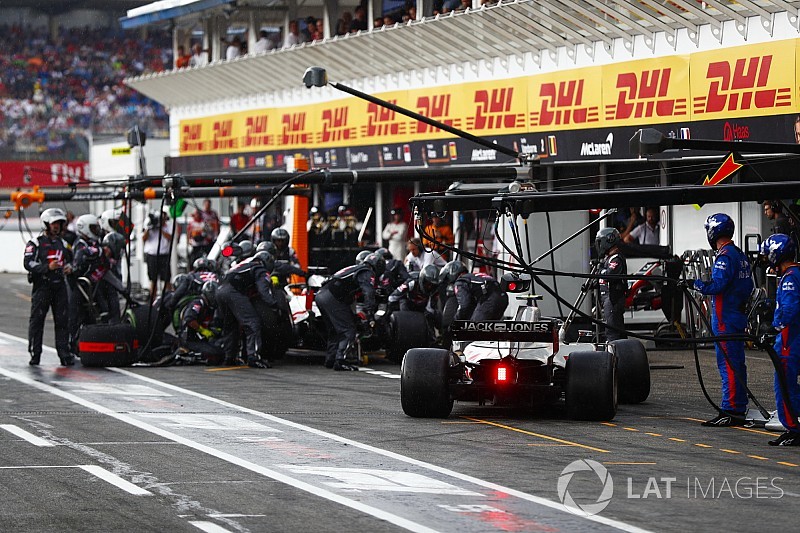 Haas Formula 1 boss Gunther Steiner says his team “got away” with its conservative German Grand Prix strategy, as both of his drivers made three pitstops each.

Kevin Magnussen and Romain Grosjean looked on course to finish sixth and eighth respectively in what would've been the team's second-best points haul of the campaign, before late rain threw a spanner in the works.

Magnussen fell behind Renault's Nico Hulkenberg and teammate Grosjean in the slippery conditions, before Sebastian Vettel's crash brought out the safety car, prompting Haas to react and pit both its cars for inters on the same lap.

Despite the rain easing off and forcing both to stop again under safety car to switch back to slicks, Grosjean charged through to sixth in the end, although Magnussen was left outside of the points in 11th.

“We did damage limitation - if we continue to do what we're doing, we’re still in a very good position,” Steiner said after the race. “Yeah, we lost two points [to Renault and Force India], but in the big picture, that’s not a lot.

“I would rather have gained two points, for obvious reasons, but these things happen.

“I’m honestly not disappointed. For sure I would like it to be better, but I think it was damage limitation and we got away, like other people got away with it. And some had a little more luck, took a risk and gained a little.

“If there is nothing to lose, it’s easier to take risk. We always have to balance that.”

Pitstops under safety car cost Grosjean and Magnussen track position, but left the pair on fresher tyres, which allowed the former to recover places in the final laps.

And while staying out did pay off for the rival Force India team, as both Sergio Perez and Esteban Ocon made the top eight despite finishing on soft tyres that had completed over 40 laps, Steiner is adamant the risk would've been too much for his cars.

“It’s always difficult to say whether it’s right or wrong, but I’d say it was the right decision [to pit] because it was too slippery out there," Steiner said.

“With our worn tyres we had on, the risk to go off somewhere, like Vettel, did was very high, as they were very worn and both drivers say there was no chance to get the tyres up again to temperature.

“You’re in between and at the time you don’t know how long the rain lasts. But if you put new tyres on, they cool down so quick and don’t grip anymore.

“So it’s one of the situations where we were at that point, is we could just lose, we don’t want to take risks, because if we do – you can lose everything.”

Asked about Magnussen's reaction to the lost points, Steiner said: “Would you be content if you were running sixth and then you end up 11th?

“It’s part of racing. I don’t think there was any complete wrongdoing, there were just a lot of things coming together in a very short period of time and they needed to be sorted.”

Tributes pour in for Sergio Marchionne