You might know Stephane Sarrazin as a WRC regular who spent two years as a works Subaru driver, you might know him as a sportscar specialist who has finished runner-up at Le Mans on four occasions, or you might even know him as a regular in the early years of Formula E. 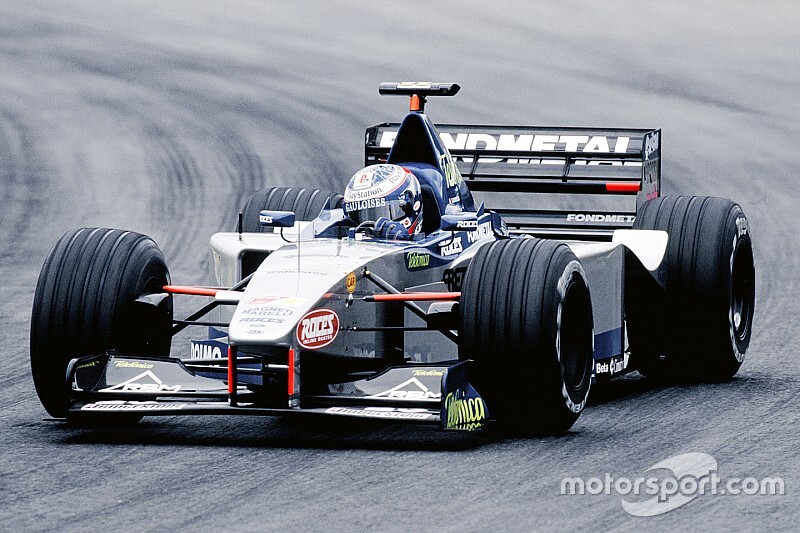 What you might not be familiar with the story of the one and only Grand Prix start he made with Minardi at Interlagos on April 11th 1999.

That race could have signalled the start of a great F1 career. Unfortunately the Frenchman’s day ended with a huge impact with a barrier that saw his car spinning like a top in the middle of the track, leaving its driver a little dizzy.

Despite showing great promise, he would never get another opportunity to start a Grand Prix. It’s a familiar story of someone who wasn’t quite in the right place at the right time.

Sarrazin had enjoyed a solid junior career. He won the French Formula Renault title in 1994, and was second in the F3 championship in 1997. He moved up to F3000 with Apomatox in 1998 – and won his very first race at Oschersleben, ahead of Nick Heidfeld.

That would be his only victory of the season, and after finishing sixth in the points he joined the Gauloises Junior team, a satellite of Prost Grand Prix, with whom he also had a testing deal.

In those days F1 testing was plentiful, and early in 1999 he logged some decent mileage at Magny-Cours and Barcelona alongside race drivers Olivier Panis and Jarno Trulli in an interim ’98 chassis.

He was testing for Prost in Spain when he received a call from Minardi team manager Cesare Fiorio. Regular driver Luca Badoer had a wrist injury from a testing crash at Fiorano. Would Stephane be available to come and race in Brazil the weekend after next?

Prost gave the go-ahead – after all any extra F1 mileage would be useful for his test driver – and a few days later, Sarrazin was in Sao Paulo. 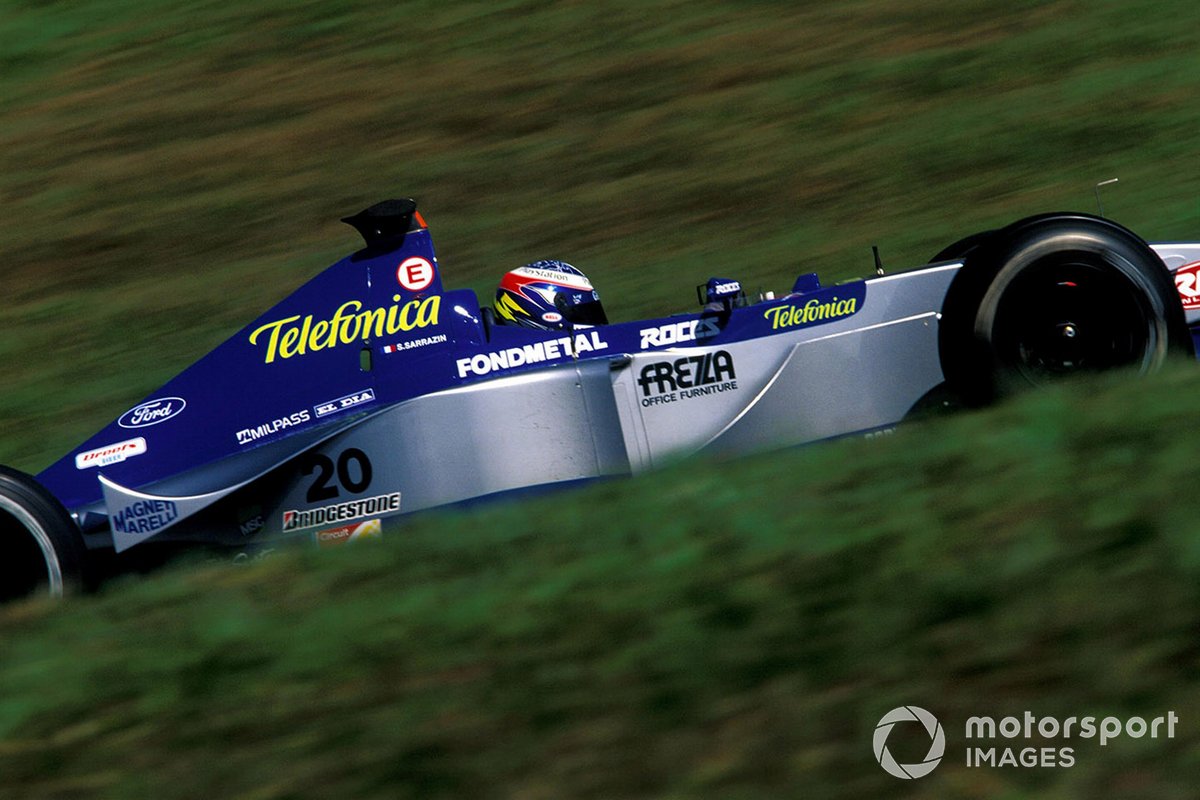 It seemed like a good story, so that weekend I followed his progress closely. He was bubbling with enthusiasm.

“Everything happened very quickly,” he told this writer. “Cesare Fiorio called me at Barcelona on Thursday where I was testing with Prost GP, and he spoke about that with me.

“I spoke with Alain Prost, and we decided I should come here. There was no big panic, I just said to myself I’m going to make my debut in F1. It was a good surprise.

“Alain is a very, very interesting person. It’s very easy to work with him. I’m very happy, because he chose me, and gave me confidence, which is very important for me. I’m learning a lot from him. He’s a very, very good driver and a manager, and a very good person.”

He wasn’t concerned about the lack of preparation: “No. I think it’s very good for me, very, very good experience. It’s not too early.

“I’ve made 2500 kilometres with Prost, so I have a little experience, and it’s good for me to make one Grand Prix.

“Jarno and Olivier are fantastic with me, because when I have a problem they speak with me and they explain the solution.”

With no opportunity to test, Sarrazin settled in well at Minardi, despite not being comfortable in the car on Friday. Rain didn’t help, and he had a spectacular spin on the main straight.

“I’m happy that I didn’t touch anything and didn’t crash the car. Lucky, but also it’s necessary to stay calm. I stayed calm, and I didn’t have a problem.

“Many things were new for me. Rain, circuit, chassis, engine, team, many things to learn. Interlagos is a very difficult circuit, because it turns left, and normally you always turn right.

“The cockpit is very little, and I am quite tall. It’s difficult for me to drive very well.

“Minardi is a very good team. My engineers work hard, my mechanics work hard, and I’m very happy. The chassis I think is very good, but the problem is the engine is old.” 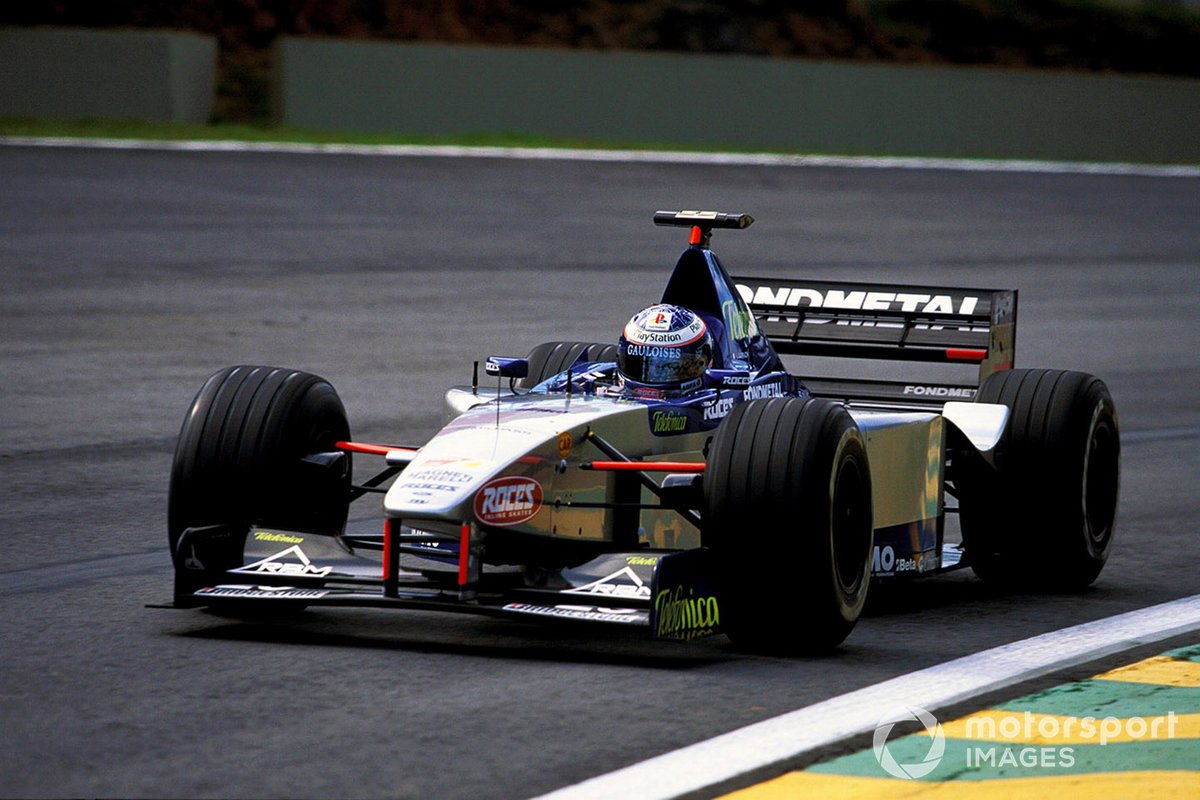 By Saturday he felt more comfortable in the car. A Minardi rarely qualified ahead of the back row of the grid, and all Sarrazin could do was outpace teammate Marc Gene.

He managed to achieve that by almost 0.7s, although to be fair Gene himself was only in his second F1 race.

“It’s not the main problem, but normally it’s good to be before the other driver,” he noted.

“Qualifying was a new experience for me, because I never made this qualifying - one hour, only 12 laps. I’m happy because I was fast, and made a good qualifying, not problem.

“I think people are surprised, because they don’t know my name, especially the other managers in F1. For this, I have to push.

“My position in the car is not so bad now, but yesterday but was very, very bad. I think tonight we make a new seat.

“I made many laps, and now I know the circuit, and tomorrow will be very interesting. Tomorrow I think is a very big moment for me in my life.”

Along with Gene he also outpaced Arrows driver Tora Takagi. The other Arrows driver Pedro de la Rosa lost his best lap to a yellow flag penalty, and then BAR’s Jacques Villeneuve started from the back after a fuel offence, leaving Sarrazin in a promising 17th of 21 starters on the grid.

He gained a couple of places at the start, soon passing the Williams of Alex Zanardi, but then ran wide and dropped to the back.

He’d worked his way up to 11th when on the 32nd lap he went off at the corner onto the pit straight, hitting the tyre wall hard and bouncing back onto the track.

With the throttle seemingly still open he then did a bizarre series of half a dozen impromptu doughnuts, with smoke pouring from the rear tyres, before the wrecked car came to a halt. 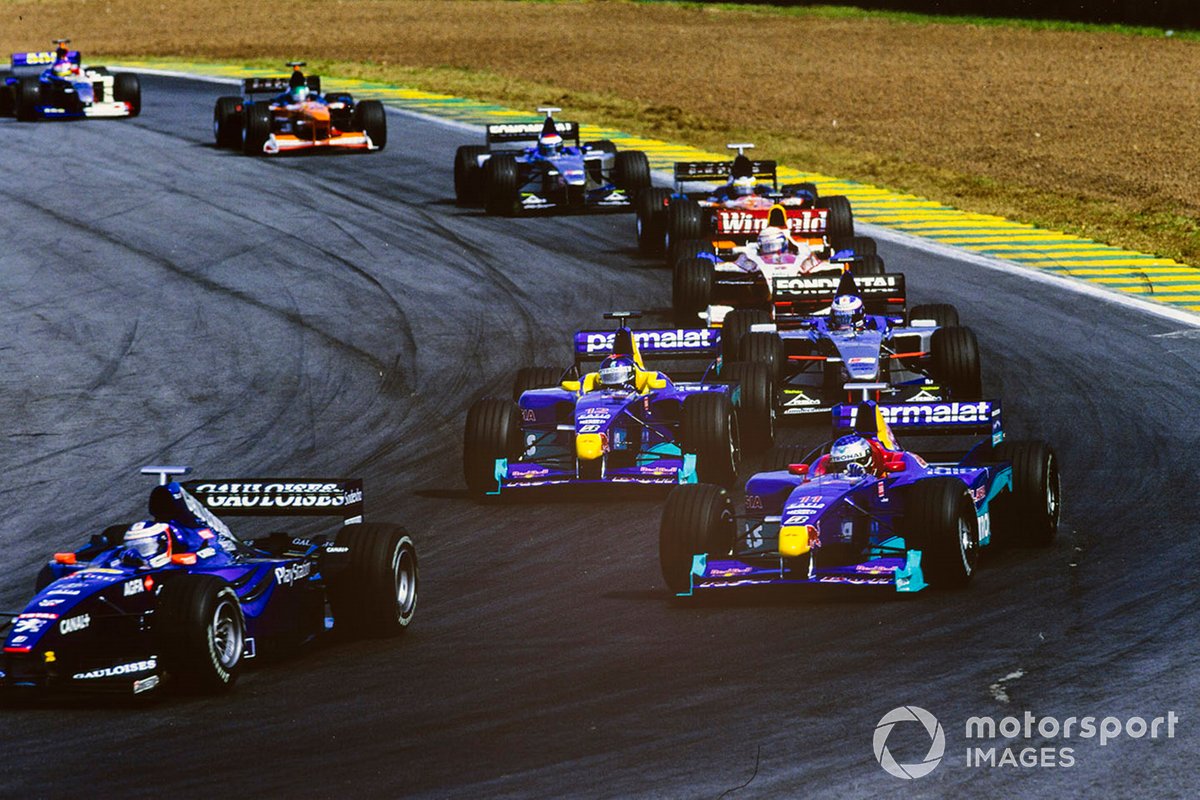 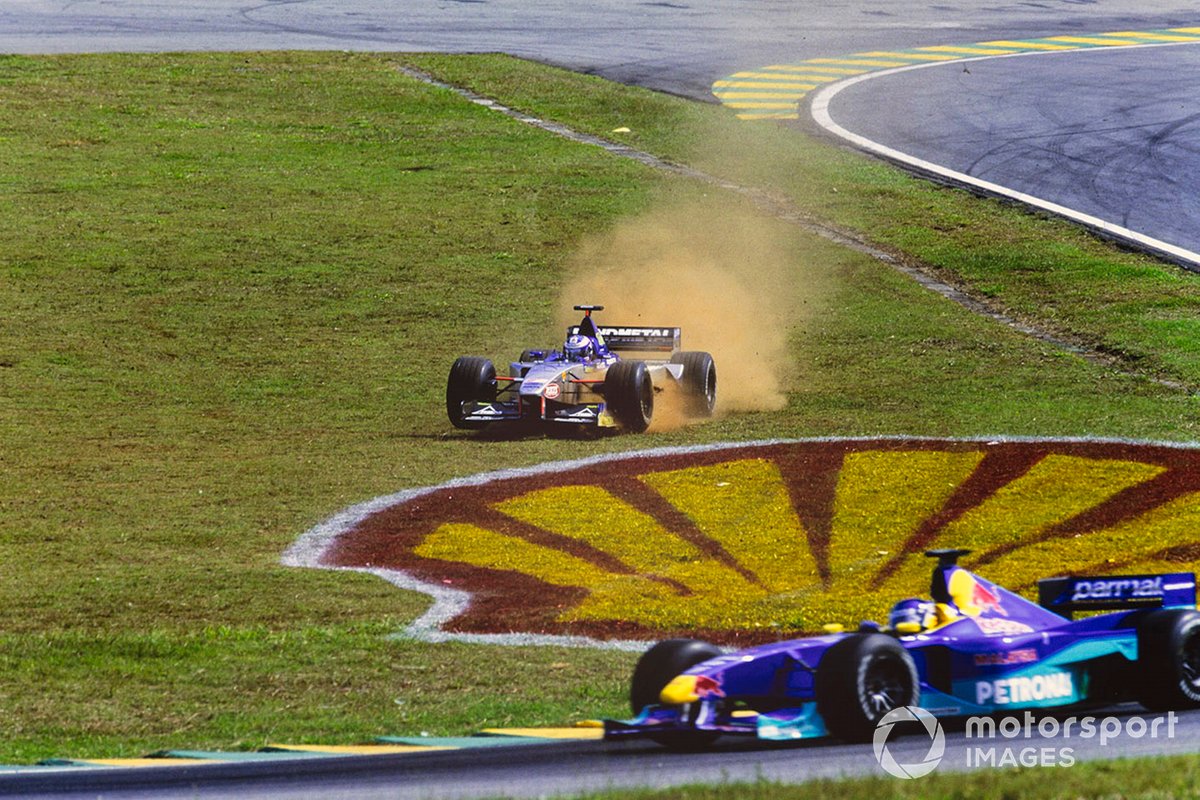 It seemed obvious that something had broken on the car, although Sarrazin couldn’t explain it when I spoke to him after the flag.

“I don’t know but my car went straight and I crashed very hard,” he said. “I don’t know what happened, but sure, something broke.

“I had a very good start. I passed Zanardi, but I went straight. After that I was very fast. I passed de la Rosa, Gene, I passed three cars. I was behind Villeneuve, and he went in the pit.

“It was a big crash, but this is racing. I’m unhappy because I had a good car for a good result.”

The weekend done, and with Badoer expected back for the next event, Sarrazin knew that he had to switch his attention to F3000.

“It’s very important for me to win the championship this year,” he said. “But it will be very difficult. I don’t know if I can do it, but I’m going to work. There are many possibilities for next year. If I can work for Alain, I’ll be very, very happy. I’m going to work for it.

“Next week I’ll be testing the Prost again. I’ve been testing many things for the chassis, I have three or four programmes. And after, if I work well, I can drive in a Grand Prix.”

“Stephane was an unbelievably quick driver,” Tredozi recalls. “He arrived without any testing. We were surprised, he was very calm and also very strong in the decisions of the car.

“He drove very well, he was very quick in the race, and maybe without the crash, he would be sixth or seventh.

“The problem was in the last corner before you go uphill onto the straight he damaged the front wing on the kerb, and he lost the wing. It’s a very tricky corner there, and the kerb was very high. He went out trying to overtake another car, or something like that.

“It was very easy to see from the pillar. We didn’t have any other problems, and we didn’t consider this a failure of the car, so we didn’t change anything.

“We didn’t have any chance to use him again, and for me that was very bad.”

So what happened next? Sarrazin’s 1999 F3000 campaign didn’t go to plan, and while he won in Hungary he finished only fourth in the championship.

That was a crushing blow for Sarrazin, but he stayed on as Prost’s test driver, although he had only a few outings in 2000. In a strange twist he replaced Heidfeld at McLaren’s satellite F3000 team, but it didn’t work out, and he left before the end of the season.

In 2001 he was still officially a Prost test driver – but he did hardly any miles with a team that was struggling and would go bust at the end of the year, and he made only one F3000 start.

He was thrown a lifeline by the new Toyota F1 team in 2002, and he had a busy test schedule as a back-up to team regulars Mika Salo and Allan McNish.

However at the end of the year he was dropped. By now he was 27, and the F1 ship had sailed.

Instead he embarked on an extraordinarily diverse and successful career, and at 44, he’s still going strong.

“In every category he was quick,” says Tredozi. “Nowadays it’s difficult to see a driver quick in rallying, in Formula E, in LMP1. For me it’s not usual for drivers these days. He’s like Mario Andretti!

“One day I met him again and I said to him, ‘You are incredibly quick everywhere, and even in rallies you are very fast.’ He said, ‘For me it’s good to compare myself in every category to the guys who have big balls.’ I said, ‘Stephane, you have big balls!’” 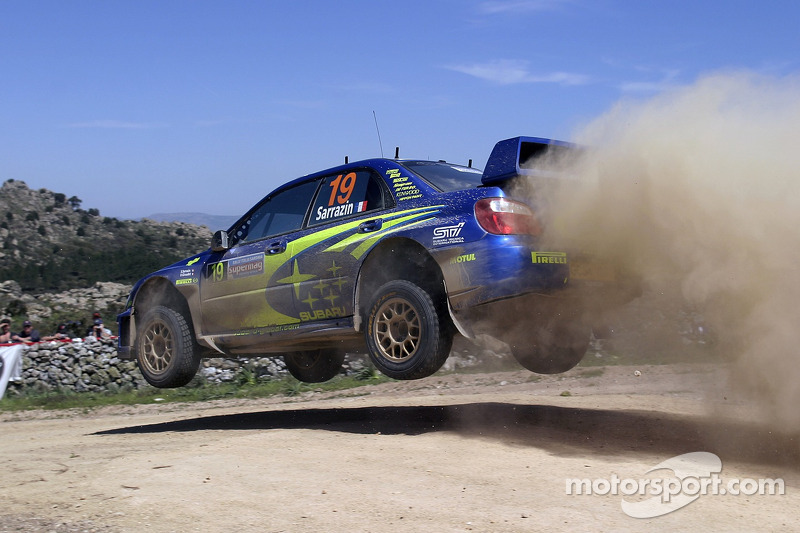