Mercedes only got a full grasp of how severe its porpoising issues were in Formula 1 pre-season testing after Storm Eunice impacted its first 2022 car shakedown at Silverstone.

Mercedes gave its W13 car a maiden run-out at Silverstone back in February when the UK was being hit by Storm Eunice that had wind gusts reaching over 120 mph, causing a number of travel networks to shut down.

George Russell described the wind on the day as being “absolutely crazy”, but it also had the impact of meaning Mercedes did not get a full picture of just how bad the porpoising problem would be until the first proper test in Barcelona.

Mercedes trackside engineering director Andrew Shovlin said that while the team had discussed potential issues with the return of ground effect, it had not “forecast the sort of mechanism that was actually troubling us.”

“When we were at Silverstone, it was the middle of a storm, we were in 70 mile an hour winds,” Shovlin told Motorsport.com in an interview looking back on Mercedes’ season so far.

“You often start with a car quite high for shakedowns and things, just to avoid damaging it and then drop it later. And during that day, we did run the car at a normal ride, and started to see the issue.

“But it was only when we got to Barcelona that you could actually look at it properly on a reasonable circuit and start to understand what was happening.” 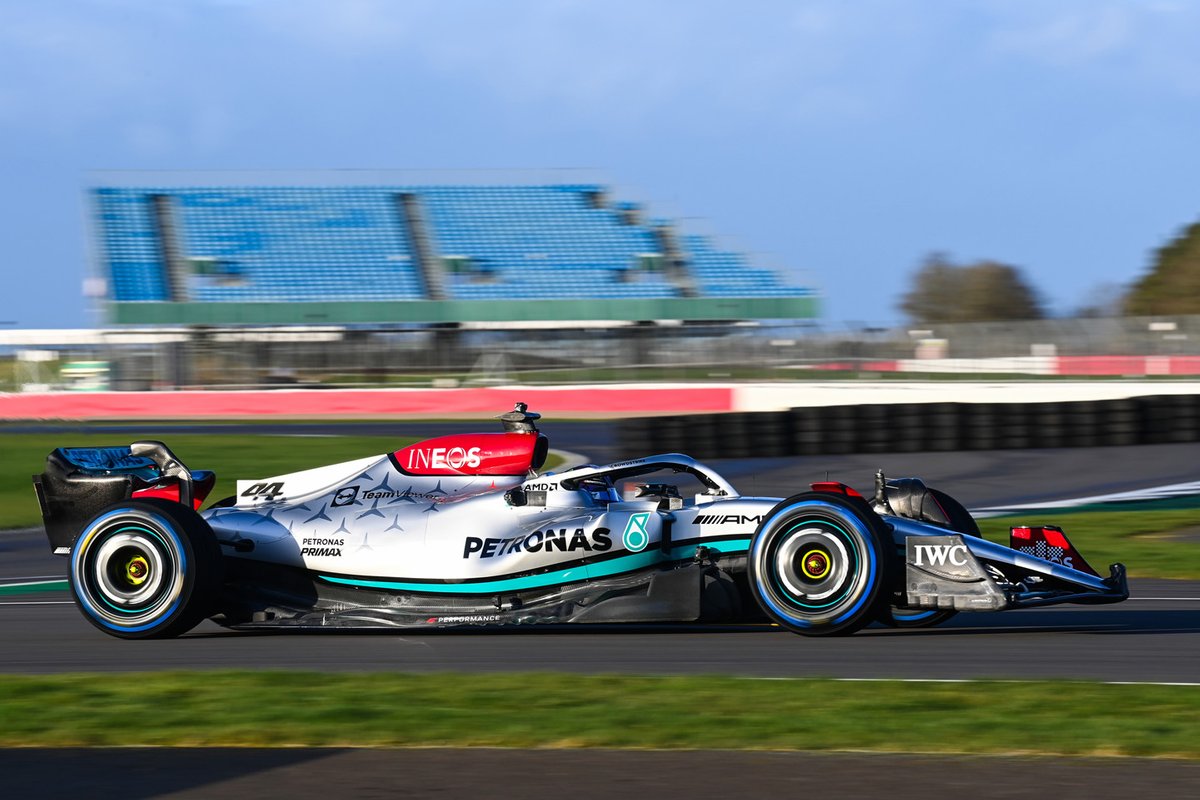 Even as Mercedes brought updates to the car for the second test in Bahrain, the team continued to struggle with its car bouncing, something that continued well into the season and hindered its chances of competing with Red Bull and Ferrari at the front of the pack.

Shovlin looked back on pre-season testing and the chase for answers as a “peculiar time” for Mercedes, calling porpoising “perhaps the most complicated thing we've ever had to get our teeth into.”

“But that progress was pretty progressive and quite encouraging, everything we were doing was was making more and more sense,” Shovlin said.

“What we hadn't really appreciated was that the problem was very much like the layers of an onion. You peel that one, you're always looking at the same thing, no matter how many layers you were taking off. And we realised that there's a few mechanisms at play.

“The issue is that dealing with that challenge whilst going racing is a lot more emotional, a lot more difficult, a lot more stressful than dealing with it back in the factory when we can explore things in our own time.

“The start of the year was difficult, coming from being a team that will go to almost every race for the last number of years thinking we can be pole and win it, knowing that at best we were towards the front of the midfield, was quite a challenge.

“But the reality is there's a significant lag between the understanding in the factory and the race car actually going faster. And Barcelona was the first time that we were able to really put any of that learning into practice on the track.”

The issues forced Mercedes to reset some of its technical thinking. Shovlin said that had it only been focusing on the Bahrain season-opener or the early races, it would have “probably gone down a much more experimental route”, but the team instead focused on seeking out a long-term fix for the problem.

“At that point, we, as engineers, were looking at it from the view that we have these regulations for four years. And what will really hurt the team is not whether we win in Bahrain, but whether or not we can develop within these regulations over the next seasons.

“That was the thing that frightened us was: if we cannot develop things in the factory, make them, bring them to the track, see them work, then the very currency that we deal with, in terms of performance becomes valueless.

“That, at times, was quite terrifying.”

Alpine has "absolutely no worries" of trouble with Alonso during 2022

BMW says it has no interest in entering Formula 1 at the moment despite the recent manufacturer arrivals, instead focusing on its LMDh programme.

Esteban Ocon believes that 2022 Formula 1 cars are going to behave like go-karts over the bumps and kerbs of the Singapore GP track.

The F1 car concept dilemma that Mercedes must answer soon

Mercedes is yet to get on top of its troubled W13 Formula 1 car as it gets set to face its first season of the hybrid era without winning either of the titles. As the time comes to switch focus to the 2023 campaign, Mercedes faces a dilemma on whether or not it should stay the course with its current car philosophy or change tact altogether