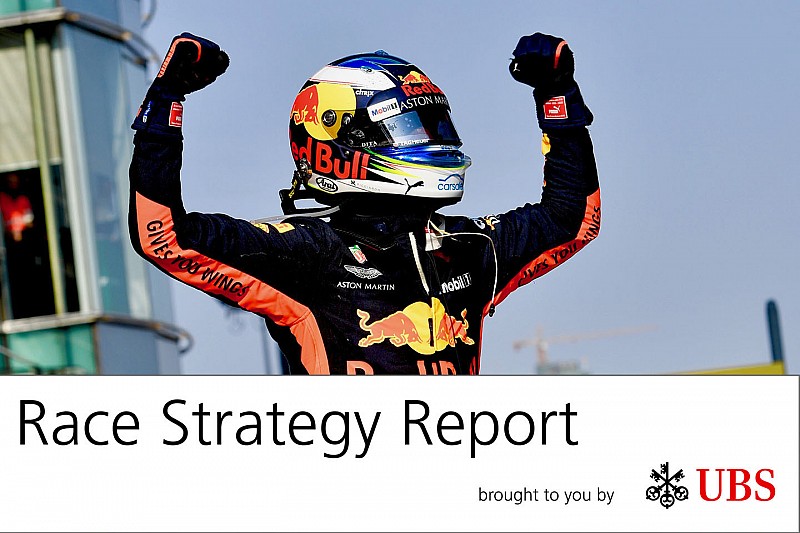 This was a race Ferrari had two chances to win, Mercedes had one chance to win, Max Verstappen had a chance to win and yet Red Bull actually won it with Ricciardo.

This would have been quite a straightforward one-stop race without the Safety Car 21 laps from the end, which Red Bull used to attack boldly by stopping both cars (the second time in the race it had double-stopped its cars on the same lap).

The timing of the Safety Car caught out the leading pair of Valtteri Bottas and Sebastian Vettel, costing Bottas the win, but it opened up the chance for Ferrari and Mercedes to split strategies and hedge their bets. Neither team took that chance.

But they were wrong. This was a day when the main strategic turning points of the race, and the wonderful excitement of some breathtaking passing moves, were all about the power of having fresh, and ideally soft, tyres. 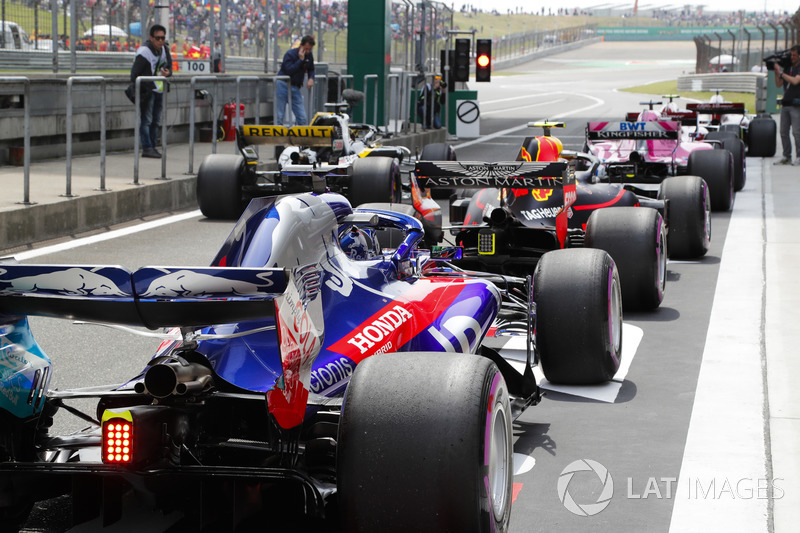 Sunday was by far the hottest day of the weekend. The question was whether the ultrasoft tyres would last long enough in the opening stint to make it a one-stop race. Ideally, they would need to go 17 laps. For the cars that chose to start the race on softs – in the lead battle, that was the two Ferraris and Mercedes cars – it was a clear one-stop.

For Red Bull, starting fifth and sixth on ultras, with strong race pace if it could just get a break on strategy, it was finely balanced. Their first moment of inspiration was when it took a risk and did a double pitstop, because the gaps around their cars meant that one of its cars would be at a disadvantage if it prioritised one. So with the gap between them on the road just enough to chance it, it went for the double stop. This kept both cars well in play.

For everyone thinking of a one-stop, Toro Rosso’s Pierre Gasly was a benchmark; he was put on to fresh medium tyres at the start of the race, which gave all the teams a chance to see their performance. Fernando Alonso was another who went onto mediums quite early, committing to a one-stop early. His performance provided encouragement to teams towards the medium tyre. 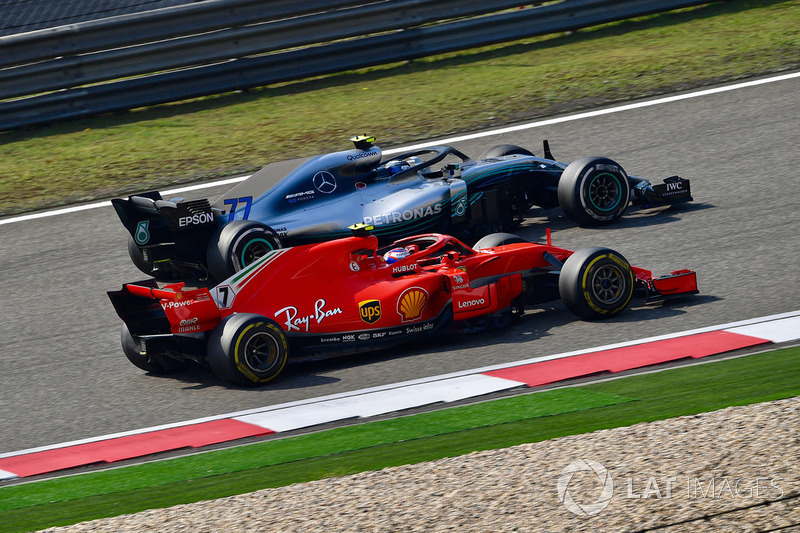 How Ferrari lost the lead to Mercedes

Although the main drama was saved until the final act, the middle part of the race provided a strange moment in the competition between Mercedes and Ferrari.

Ferrari, who had dominated qualifying and looked set for a third consecutive win, made a series of small errors that added up to Vettel losing the lead. First, Vettel squeezed teammate Kimi Raikkonen at the start, forcing him to lift and he was passed by Bottas. This gave us the same pairing in the lead battle as Bahrain, and it left Vettel without protection from behind and vulnerable to an undercut.

Then the team underestimated that undercut effect – new tyres count for a lot in performance delta. It was in Ferrari's hands, so Vettel could have anticipated the attack from Mercedes and stopped first.

These things are finely judged and you don’t want to pit too early and have to risk running out of tyres.  But you also have to cover the undercut otherwise you look foolish when you lose the lead this way.

Vettel had shown in Melbourne and Bahrain that he can make a set of tyres last a long time on this Ferrari. So the Scuderia should have been the one taking the initiative, not allowing Mercedes to take advantage.

When Bottas stopped on Lap 19, Vettel’s lead was just over three seconds, which was marginal for Ferrari - especially as, after its problems with pitstops last time out in Bahrain, Ferrari might have built in a little more margin, knowing that the pit crew would be tense at that first stop.

Mercedes executed the stop very quickly, while Ferrari lost a second when it pitted Vettel to try to cover the move. With Bottas doing his bit with a very fast out lap, the net result was Vettel’s lead was lost. 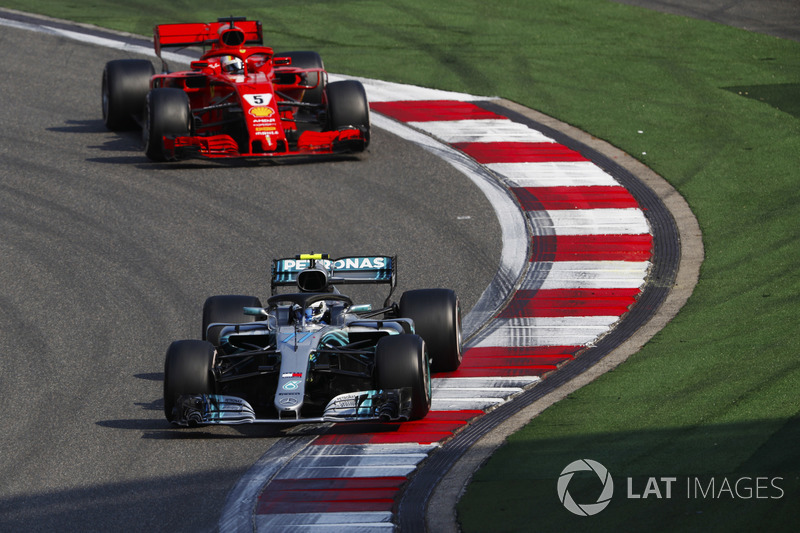 Raikkonen was then sent on a mission to stay out. At first this looked like a repeat of what Ferrari did in Melbourne, with Vettel building a seven-lap tyre offset. But the time being lost by Raikkonen against cars on new tyres (up to two seconds per lap) meant that this didn’t make sense as a strategy. Raikkonen was being left out to try to back Bottas into Vettel so he could try an attack.

This kind of move is risky on two fronts: first it is hard to choreograph, and second, it’s demoralising for the driver who is asked to do it. Raikkonen has been more competitive this season than for many years, and felt he had a chance to win this race. Being blocked at the start by Vettel into Turn 1 and losing position to Bottas did not improve his mood.

But he did what he was asked and avoided getting caught where Bottas would pass him easily, into the hairpin. Ideally, Ferrari would have like them to catch Raikkonen where he would be able to hold Bottas, in the fast curves allowing Vettel a chance to ambush. But Bottas was bolder than in Bahrain and made a daring pass the first time he saw a chance, into Turn 3.

We’ve said since the start of the season that Ferrari will win this championship if they can execute perfectly. They did so in Melbourne and Bahrain, but this series of small errors handed Mercedes a lifeline, especially after the shame of not putting a car on the front row in qualifying. 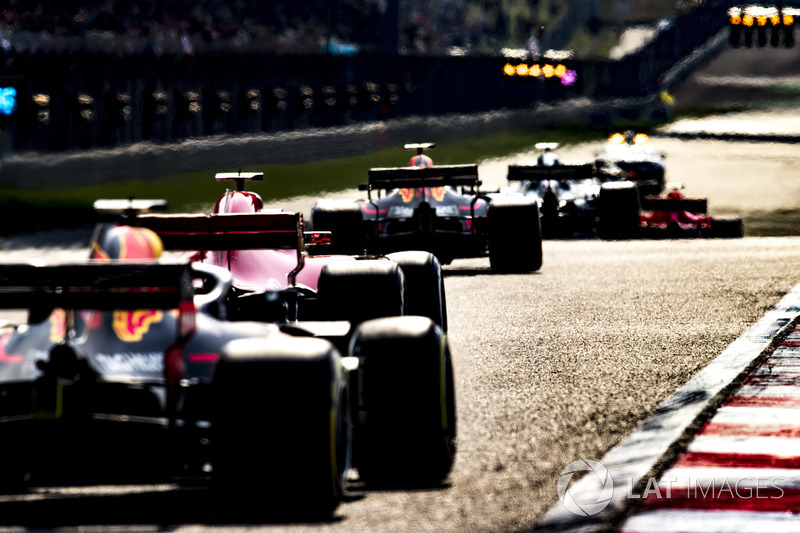 Having been passive in strategy early on, it was therefore surprising that Ferrari didn’t react and have a go later on when the Safety Car was deployed 21 laps from the end.

It took a couple of laps for the Race Director to throw the Safety Car, as he assessed the debris from a collision between the Toro Rosso cars. In a situation like that, teams have everything on standby, tyres ready for a snap call. Everyone is tensed up waiting for that signal.

It was called as Verstappen, in third place, was exiting the Turn 14 hairpin. It was too late for Bottas and Vettel, but Red Bull strategist Will Courtenay again calculated he had enough gap between his cars to do a double pitstop. As a stop under the Safety Car loses two thirds less time than at normal speeds, it’s attractive. But if the gaps aren’t in your favour you can lose track position. 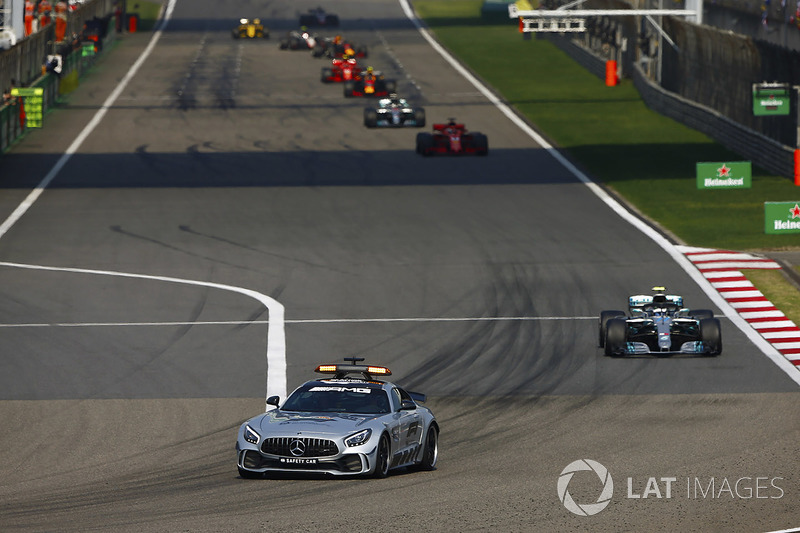 Raikkonen’s tyres were the freshest of the leaders, but he still would have benefitted from a new set of soft tyres (he had one set available). Hamilton most definitely would (he only had a lightly used set).

Hamilton was having an ‘off’ weekend, but came alive when served up fresh soft tyres in qualifying and would undoubtedly have been very quick in the final laps had he been given the chance to stop.

For both Mercedes and Ferrari, it made sense to pit one driver under the Safety Car, as they already had the other driver committed to staying out on worn medium tyres. The Safety Car would bunch the field up for the restart, so there would be the chance to attack on new soft tyres. 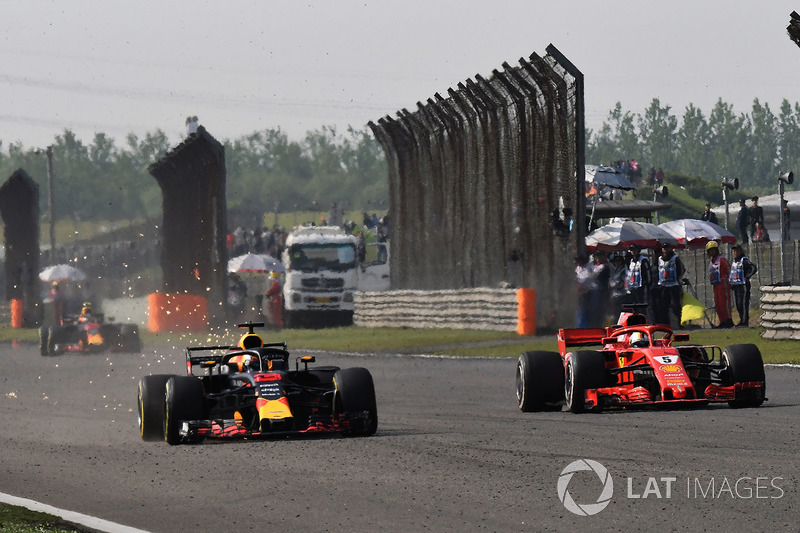 It was already clear from the Vettel vs Bottas undercut what the advantage of new tyres was on the day. Shanghai is a track where a car with more grip coming off a corner will have a great chance to pass into Turn 6 and Turn 14; two chances every lap.

One of the two strategies would have worked out and in Hamilton’s case he would have finished ahead of Ricciardo, although Red Bull might have left Ricciardo out had Hamilton pitted as a hedge of their own. That is what Mercedes feared and with Red Bull proving quick in race pace they were concerned about getting back ahead.

Hamilton had 15 seconds on Raikkonen, so it was only Ricciardo they were thinking about when the team prioritised track position.

Raikkonen had a 24-second gap to Hulkenberg. So, there was no risk from behind to him making that stop. For Ferrari, the reason for not stopping Raikkonen must surely come down to the calculation that he might catch and want to pass Vettel.

With a clearly defined team dynamic between the two – Raikkonen seems to be cast as the ‘domestique’, as they call it in cycling, doing the dirty work for the lead driver – how would Vettel have reacted to being asked to let his teammate through? 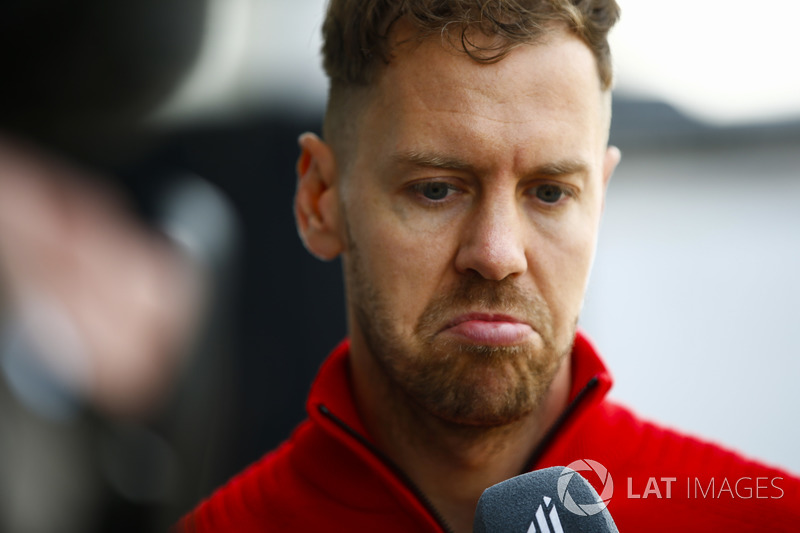 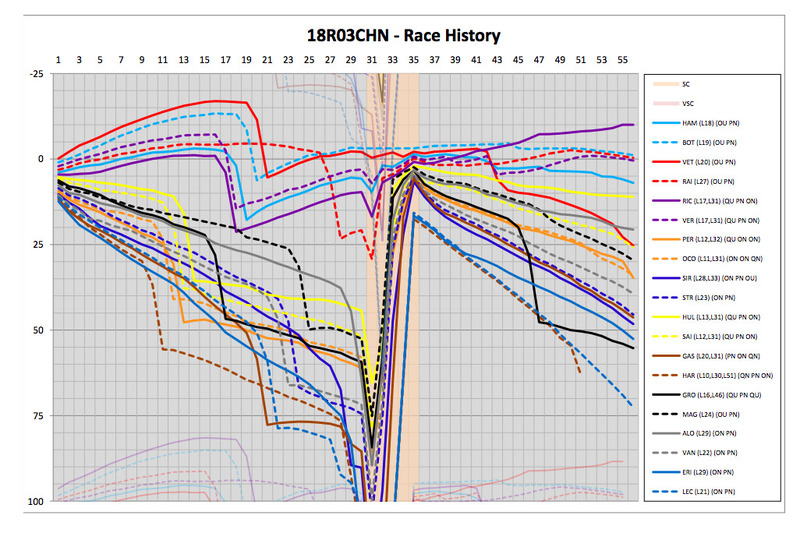 The number of laps is on the horizontal axis; the gap behind the leader is on the vertical axis. The aspect to look at is the gaps between the cars and also the relative pace of the cars. A positive sign is an upward curve indicating strong pace as lap time falls.

Look at the gap Raikkonen has to Hulkenberg before the Safety Car (orange vertical band). Look also at how much time he loses by staying out in the opening stint. In contrast to Melbourne, where the tyres held on for Vettel, in China new tyres are at a premium. 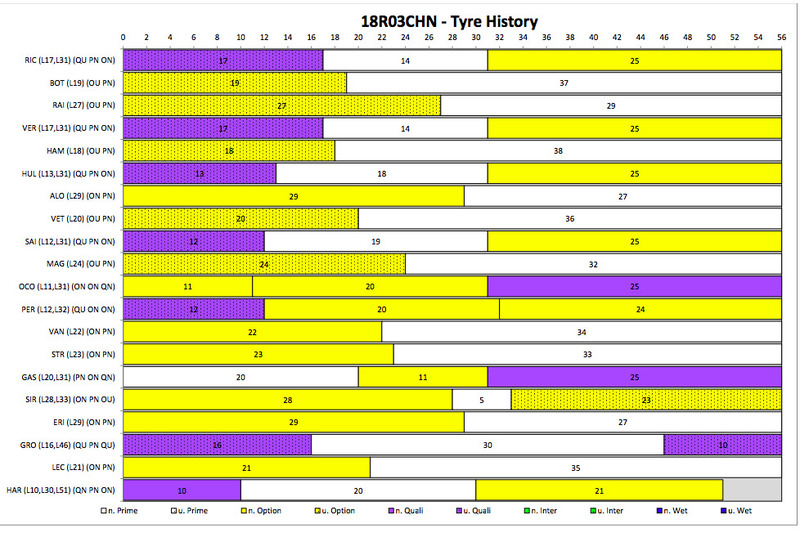