Strategy Report: Could Ferrari have inflicted more pain on Mercedes? 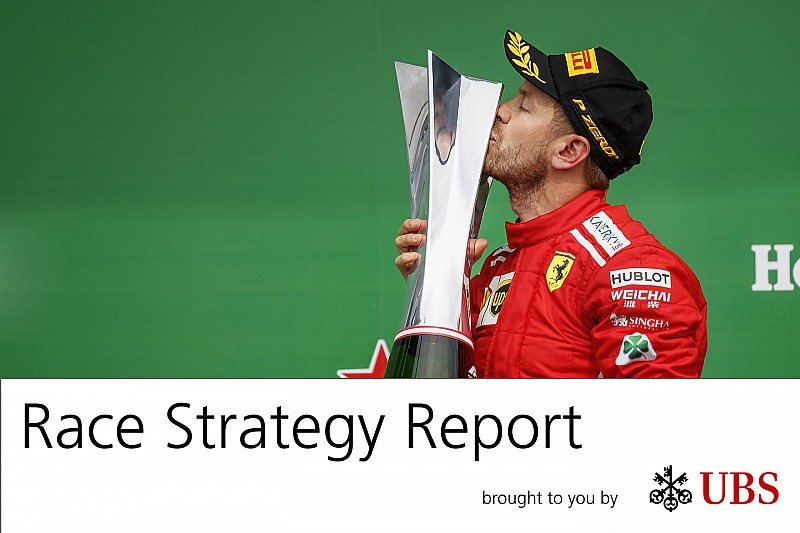 James Allen analyses the Canadian Grand Prix, as Ferrari’s Sebastian Vettel won to take the points lead away from Lewis Hamilton – but could the Scuderia have done even more damage?

The Canadian Grand Prix has always been a track where the unexpected can happen, where there are options for race strategy and the DRS wing is very effective for overtaking.

However, this year that was not in evidence as drivers struggled to get close to each other to pass – with aerodynamics and overheating tyres the cause – and once again did the race almost uniformly with a one stop strategy.

But it is an open championship; interestingly, the last three Grands Prix have all been dominated by the winner, but in each case, it has been a different driver and team combination; Mercedes’ Lewis Hamilton in Spain, Daniel Ricciardo and Red Bull in Monaco and now Sebastian Vettel in Canada for Ferrari.

Here is our customary in-depth analysis of how – and why – the big decisions got taken, with input and data from some of the decision makers. 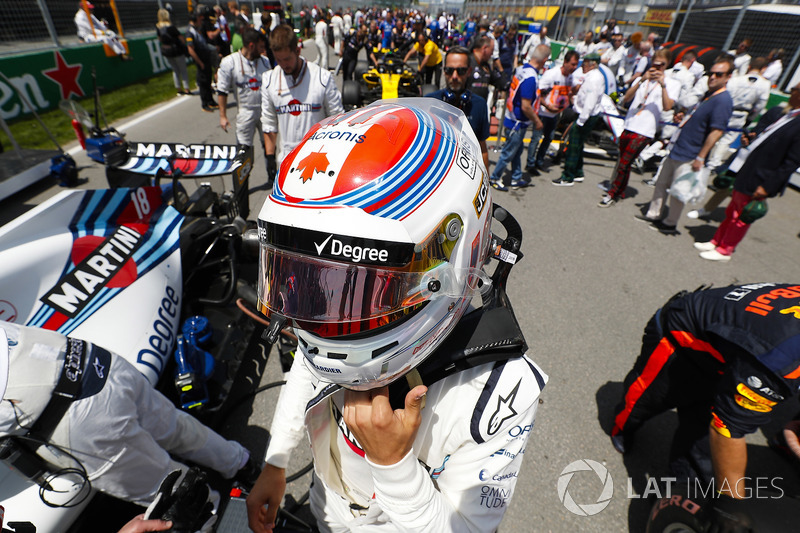 Montreal has traditionally been a track where the decision between one stop and two is finely balanced. The danger with doing one stop in Montreal was always that, although you are in front of a two stopper when he comes out from his second stop, he's on fresh tyres and with the DRS wing he will find it easy to pass you down the long straights.

However, with a 71% chance of a safety car, which would swing the race to the one stoppers, it can be worth a gamble for midfield runners looking to make up places.

With this generation of cars, the FIA recognised the problem of getting close to pass and added a third DRS zone for this race, going into the hairpin. But that did not make any difference and overtaking was scarce in the race. This dictated race strategy.

If Canada can be affected this way then it is surely time to make changes, as has now been done for 2019. 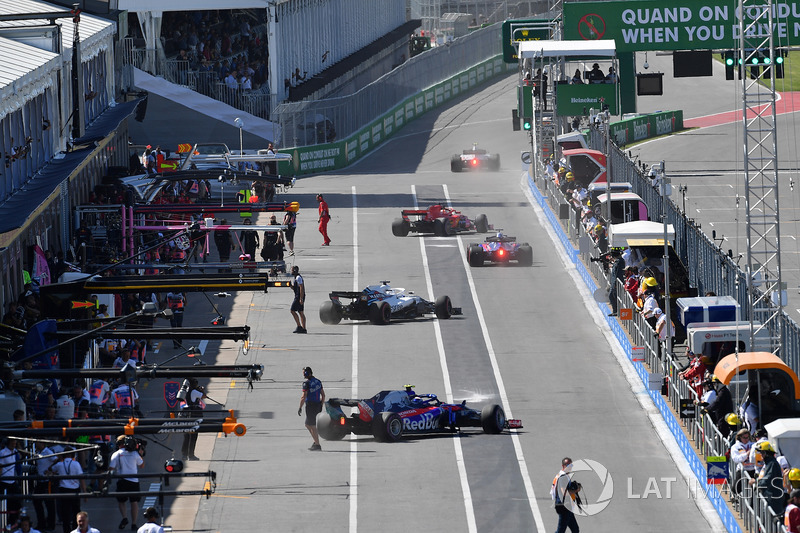 It was interesting to reflect on Friday night about the direction teams appeared to be going. Mercedes continue to dislike the new hypersoft tyre and didn’t use it during Friday’s Free practice 2 session, preferring to concentrate on the ultrasoft and supersoft tyres.

This was a mistake as the drivers didn’t have a chance to get the feel for the tyres ahead of qualifying, just a short run in FP3. And as the race turned out to be about track position, it was costly.

Ferrari tried it but clearly felt that the ultrasoft was a better race tyre, offering more strategic freedom with a longer first stint in the race. In contrast Force India showed their intent by working primarily on the hypersoft and supersoft tyres. 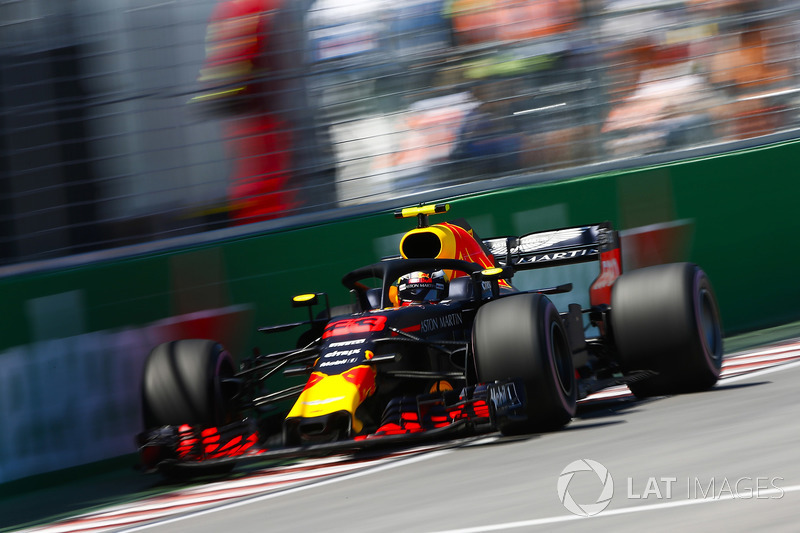 In the end Red Bull were the outliers among the top three teams, the only ones to use the hypersoft tyre for qualifying two and the race start. The thinking was that they were gentler on the tyres than the Ferrari or Mercedes car and also that the extra grip off the line would be advantageous in picking up places.

With overtaking so difficult and track position therefore at a premium, a place gained at the start could be very precious.

Max Verstappen made a vigorous attack on Valtteri Bottas for second into Turn 1, but the Finn resisted, and it set him up to finish there. Meanwhile Ricciardo in the sister car did manage to pass Ferrari’s Kimi Raikkonen and gain a crucial place to fifth.

He would later get into fourth ahead of Hamilton, when the Briton was obliged to make an early pit stop due to overheating. 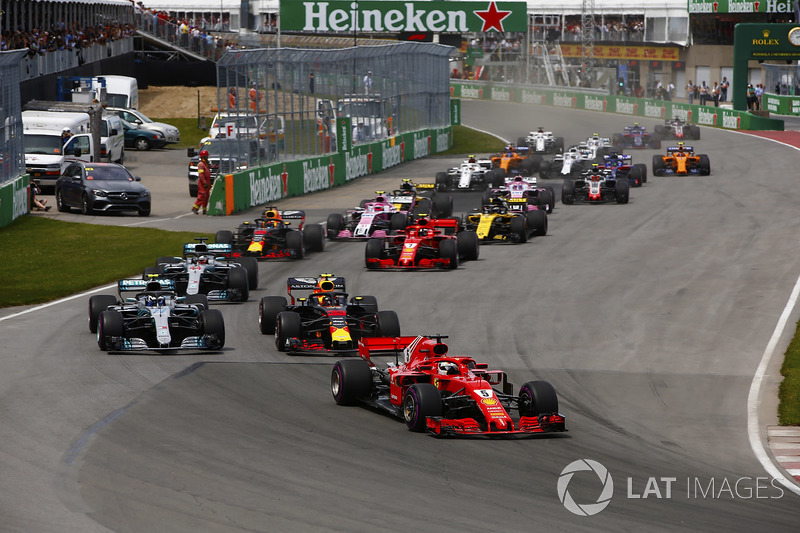 Sebastian Vettel, Ferrari SF71H, leads the rest of the pack at the start

Having resisted Verstappen at the start, Bottas was able to stay ahead as the hypersofts inevitably faded after ten laps or so. But he couldn’t do anything about Vettel, who pulled away steadily, despite losing the margin gained at the start when the race was neutralised with a Safety Car for a spectacular accident involving Lance Stroll and Brendon Hartley.

Hamilton pitted on Lap 16 to move onto supersofts. Ricciardo had been in undercut range of him and the gap was being monitored back to Leclerc in the Sauber.

Hamilton was battling with an overheating engine due to a body part acting wrongly, so his race was compromised first by having to run a different mode, by having to pit earlier than ideal to make adjustments at his stop. He just cleared Leclerc. 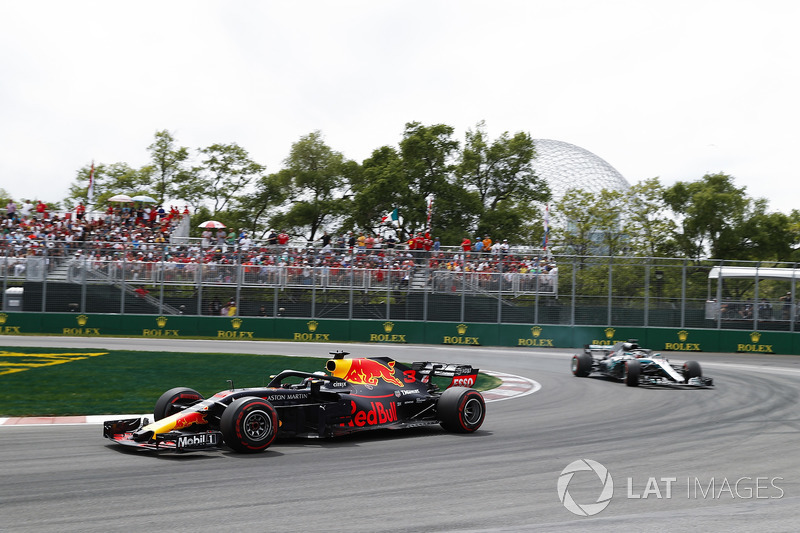 Red Bull reacted and brought Ricciardo in a lap later and with a faster stop he was able to overcut the Mercedes and gain another position to fourth. Red Bull had also covered off any threat from Hamilton to Verstappen by anticipating his stop, seeing the Mercedes mechanics running out into pit lane and came in on the same lap.

This was a reasonable stint length for the tyres they were on, but only half the stint length Hamilton would have been expecting.

The only ray of sunshine for Hamilton was that Ferrari didn’t capitalise on the chance to beat him with Raikkonen. Hamilton was already set to lose his championship lead to Vettel with the order as it was. Moving him another place behind Vettel would have been valuable to Ferrari.

Although the Mercedes was relatively faster on the supersoft tyres, Hamilton wasn’t able to get the gap down to a safe level to be ahead when the Finn pitted. He was behind Ricciardo and not able to run at his own pace. 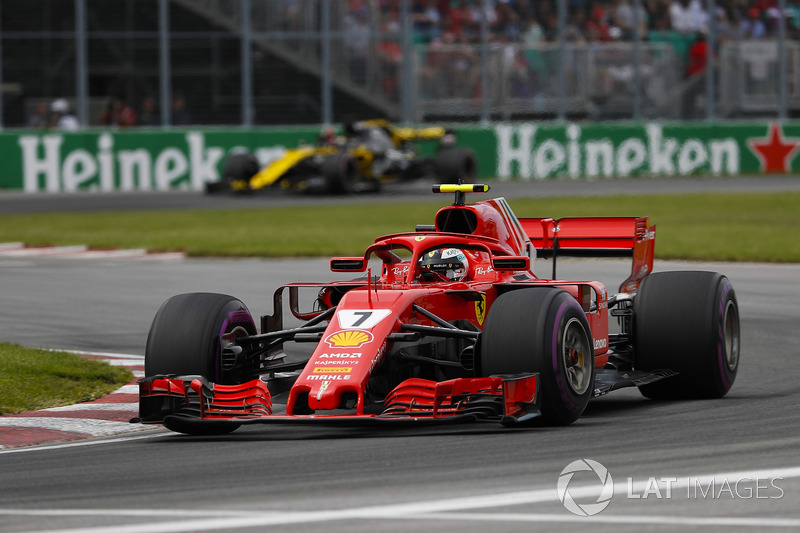 Ferrari kept Raikkonen out, attempting to do an overcut of both Red Bulls and Hamilton to get the podium, taking advantage of the clear air ahead. He didn’t have the pace to manage it.

But by trying and running longer, he didn’t close out the earlier chance to pit and gain track position on Hamilton and add an extra two points to Vettel’s championship lead.

The peak of his lead was on Lap 30, there were only a few tenths in it, but the gap was there and as Raikkonen didn't appear to be making enough ground to jump three cars, it might have made sense. 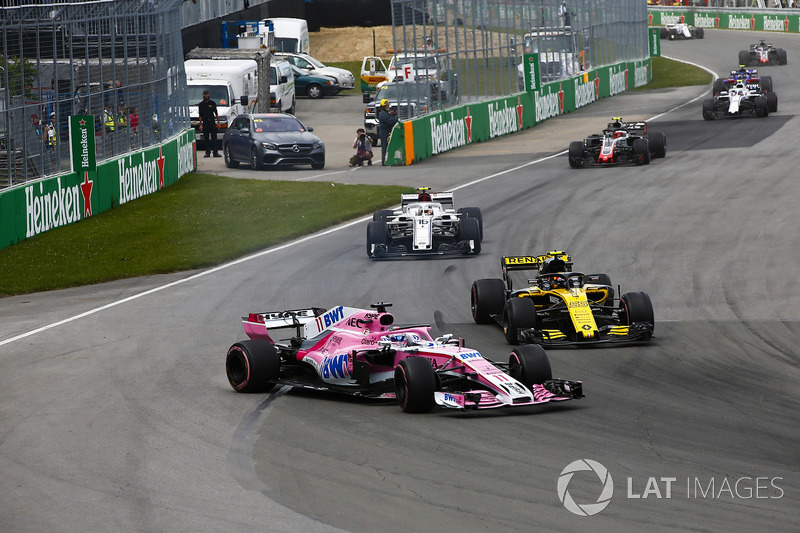 This was a good race for the Renault team that showed itself to be clearly the best of the rest behind the top three teams, albeit at some margin.

The cars of Nico Hulkenberg and Carlos Sainz comfortably overcame the Force Indias but they were still lapped, despite using the same upgraded engine as the Red Bull team.

Hulkenberg lost a place to Esteban Ocon on the opening lap, but gained it back in the pits with an overcut, which owed a lot to a problem with the Force India rear jack. Sainz also got ahead of Ocon. 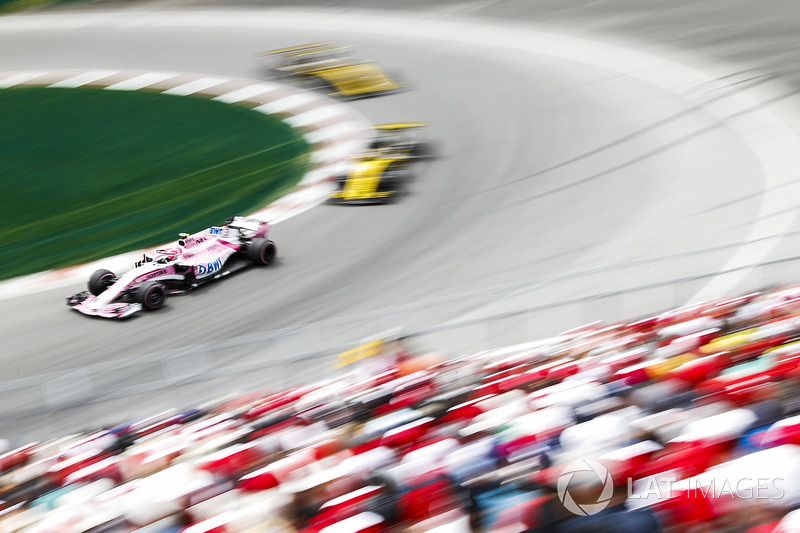 Perez was forced to try a two-stop strategy, pitting on Lap nine but he wasn’t able to make use of it in the second stint as he was held up by Gasly with Leclerc just ahead. In previous years that wouldn’t have been an issue at Montreal but it was a clear illustration of just how tough overtaking was this year, despite three DRS zones.

Meanwhile Leclerc and Alonso had a great battle early on which the younger man initially won, but Alonso managed to pass him with an undercut in the pit stops only to retire the car. 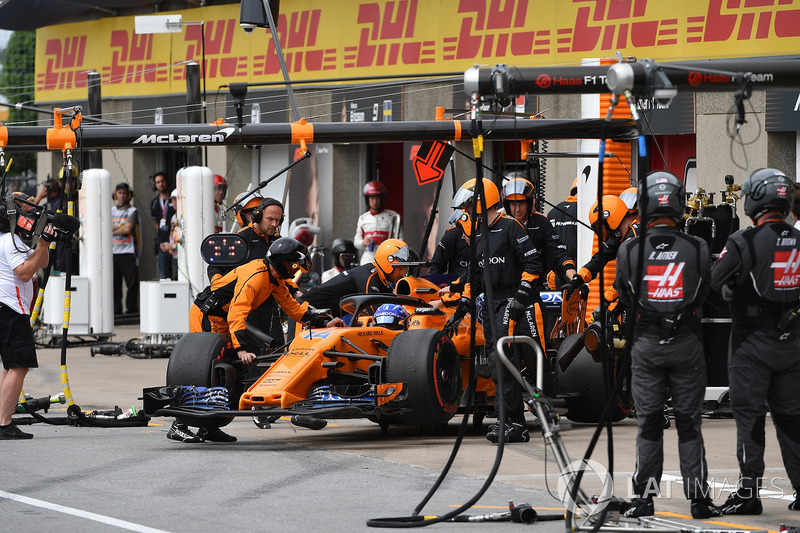 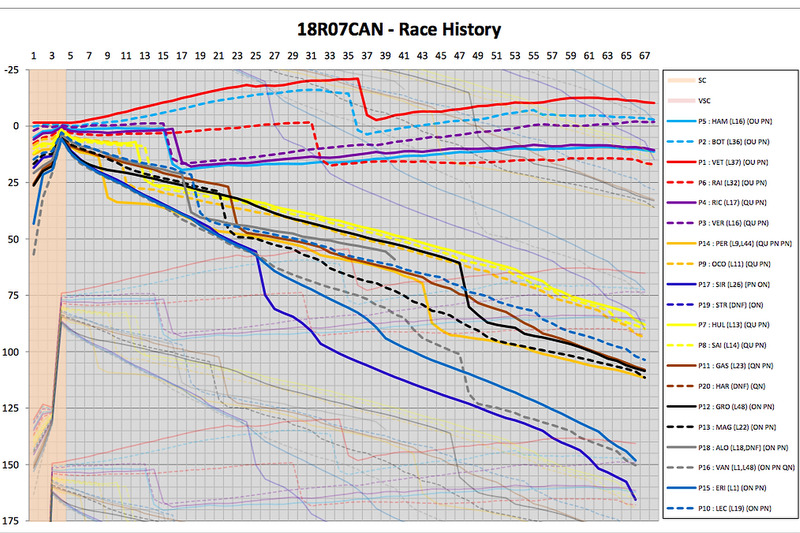 The number of laps is on the horizontal axis; the gap behind the leader is on the vertical axis. A positive sign is an upward curve as the fuel load burns off. A negative sign is the slope declining as the tyre degradation kicks in.

Note the period around Lap 24-27 when Raikkonen is trying to build a gap to the Red Bulls and Hamilton to overcut them. In clear air he doesn’t have Vettel’s pace and also fails to take advantage of the opportunity to take an extra two points off Vettel’s title rival Hamilton by stopping when he still had a safe margin to him. 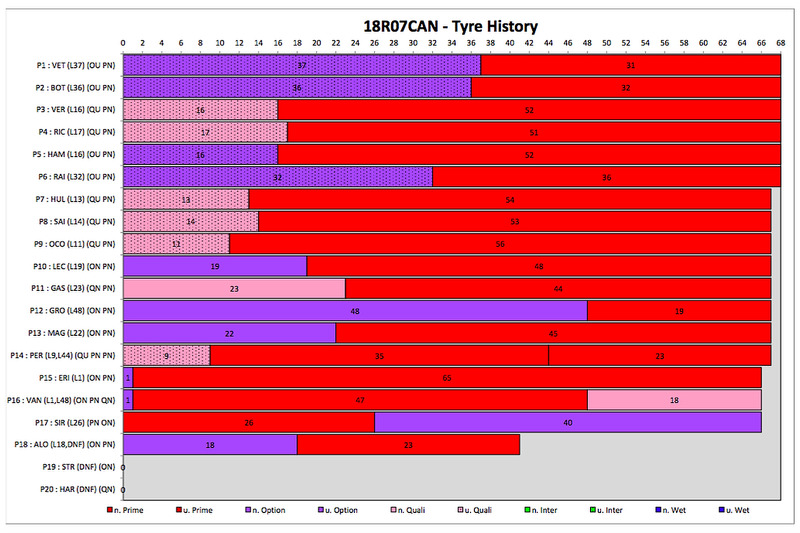