Racing Point Formula 1 driver Lance Stroll says he was "quite upset" over Sebastian Vettel sending him into a spin after rejoining the track rashly during the Italian Grand Prix. 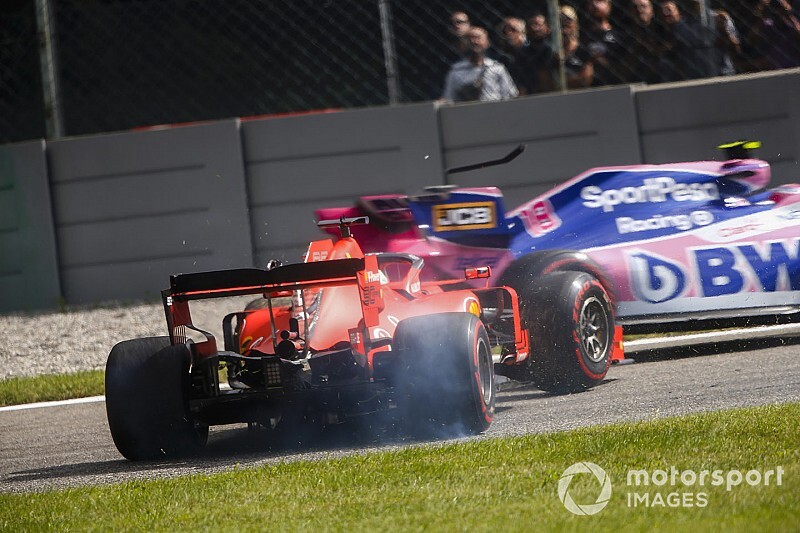 Vettel spun while entering the Ascari chicane on the fourth lap, and found himself parked on the grass inside of the chicane's right-hand corner.

Upon rejoining the track, he tapped Lance Stroll's RP19 into a spin, despite the Canadian attempting to take evasive action.

Speaking after the race, Stroll said of the incident: "I'm quite upset about what happened, to be honest. He was in a position where he shouldn't have just come back on the circuit that aggressively.

"I did everything I could to avoid it, I was really cautious, saw the yellow flag, lifted off and whatever. I obeyed the rules in that circumstance and he just came back on the circuit in the middle of Ascari and there was really nothing I could do even at the speed I was going, which was quite slow.

"He was blocking the whole circuit at that point and then he clipped me and I spun and I was pointing the wrong way."

The contact with Vettel left Stroll on the left-side exit kerb, and as he attempted to return to the racing line the Racing Point driver forced the approaching Toro Rosso's Pierre Gasly into the gravel.

Like Vettel, Stroll insisted that he hadn't seen the incoming car, and said he "was just trying to get out of the way".

"I couldn't see who was coming from my right so I had to do a dangerous manoeuvre to get back on the circuit myself and then I got penalised for pretty much the same thing [as Vettel]. It was just a disaster really.

"I had no visibility on my right side so I was just trying to get back in the race at that point.

"For sure but there's nothing really you can do at the moment with these cars, it's just a bit of a guessing game."

Gasly recovered from the run-in to finish 11th, with both Vettel and Stroll also ending up outside of the points.

The Toro Rosso driver described it as a "pretty close one", saying: "It's better that nothing happened, because it could've been a lot worse.

"But, it's also like, yeah, it cost us quite a lot at the end of the race, when we finished only three seconds from P9."

Both Vettel and Stroll were penalised soon after, with the former receiving a 10-second stop and go penalty and the latter only taking a drive-through.

Vettel was also handed three penalty points to Stroll's two, as the stewards ruled his infringement to be a "dangerous incident".

Asked by Motorsport.com about the discrepancy between the penalties, Stroll said: "I wouldn't have been there in the first place if he didn't do what he did, and I was on the racing line and he was on the grass from what I saw, and he re-entered the track.

"I had a portion of my car on the line, it was double-waved yellows, and I was just trying to get off the racing line."