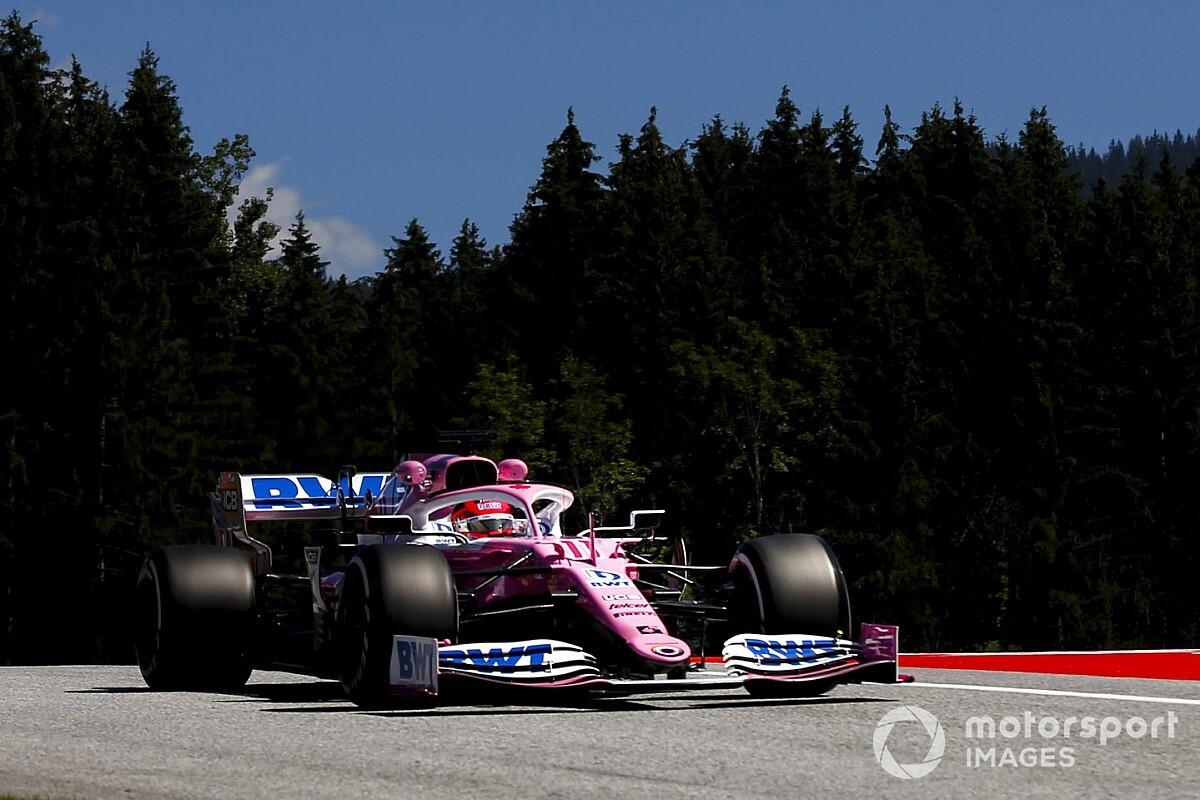 In a session that began six degrees hotter than the equivalent session for last weekend's event at the Red Bull Ring, McLaren's Carlos Sainz set the initial pace, as several squads – including Renault and Alfa Romeo – fitted aerodynamic measuring devices for the early laps.

Red Bull's Alex Albon took over at the head of field with a 1m06.344s on the medium tyres just over 10 minutes into the 90-minute session, improving that mark before Verstappen took over with 1m06.087s – also on the yellow-walled mediums.

Verstappen continued to lower the best time in the session's opening half an hour, which ended under red flag conditions as Williams's Nicholas Latifi stopped on the inside of the fast right-hand kink of Turn 5.

Latifi reported the engine "just went" although a gearbox issue was suspected of causing the stoppage, which was initially covered by a virtual safety car before the session was suspended so the FW43 could be craned away.

The suspension was lifted at the 34-minute mark and over the next 10 minutes Verstappen continued to lower the P1 benchmark on the medium tyres, slotting in a 1m05.760s approaching the halfway point.

The Mercedes pair then appeared on the mediums, after they had conducted all their early running on the hard tyres, with Bottas stealing P1 second before Hamilton nipped ahead with a 1m05.208s.

Hamilton lowered the best time again before Perez went out on the softs and shot to the head of the pack with 1m04.867s just before the one-hour marl, which was not beaten in the rest of the running.

Bottas did move into second – again on the mediums – before Verstappen used the softs to go just 0.096s slower than Perez's best time.

But Stroll lost his best time on the softs – a 1m05.211s – which was set shortly before Perez's session-topping effort on the red-walled tyres went in, because of a track limits infringement at the exit of the final corner as he ran too wide and had that lap deleted.

Albon, who complained about the handling of his RB16, particularly in slow speed corners, finished sixth, with Sainz seventh ahead of Pierre Gasly (AlphaTauri), who also had a time deleted for a last corner track limits violation, and Renault's Daniel Ricciardo.

Sebastian Vettel finished 10th for Ferrari, which was trialling its new front wing and floor for the first time.

Vettel's best time on the softs was 0.903s slower than Perez's best time, with the four times world champion locking up heavily at the tight uphill right of Turn 3 and going off into the runoff there during the early running.

Daniil Kvyat spun his AlphaTauri at the same spot late on – losing the rear as he turned in well away from the apex – and finished 11th, just ahead of Charles Leclerc in the second Ferrari.

Jack Aitken and Robert Kubica finished 18th and 19th in their FP1 cameos in place of George Russell and Antonio Giovinazzi and Williams and Alfa Romeo respectively.

Kevin Magnussen did not set a time and only completed three laps as Haas was forced to inspect a possible battery problem on his car for much of the session.