© 2021 Motorsport Network. All rights reserved.
TV Tickets Fashion Giorgio Piola Jobs
Previous / Sauber will attempt at Interlagos to reach fifth place in the constructors' championship Next / HRT will be facing its own challenge at Interlagos
Formula 1 Preview

Teams get first taste of Pirelli's 2013 tires in São Paulo

For the first time in its history, Pirelli will approach the final round of the Formula One season as sole tyre supplier with the championship yet to be decided, thanks to eight different winners from the season so far – seven of them coming in the first seven races.

Just like last year, the last race of the season will be held at the legendary Interlagos circuit in Sao Paulo, and Pirelli has nominated the P Zero Silver hard tyre and P Zero White medium tyre for the title decider.

Interlagos is one of the shortest but also one of the most technically challenging circuits on the calendar of the year, with a 4.309-kilometre lap characterized by fast corners, hairpin bends and dramatic elevation changes. 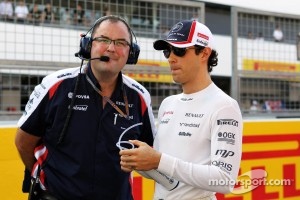 Bruno Senna, Williams on the grid

The different surface variations mean that generating optimal grip and downforce is vital, particularly as there are a number of camber changes as well.

Turn 14 – the slowest corner of the track – is a good example of some of the technical challenges that Interlagos poses for the tyres: the drivers brake hard while heading uphill and then turning into the corner, before managing wheelspin carefully as they exit the turn.

Just to add to the demands of what is already an extremely complex and busy circuit, the weather at Interlagos is notoriously variable, meaning that the Cinturato Green intermediate and Cinturato Blue full wet tyres could be called into service.

The teams will also have two extra sets of next year’s prototype tyres at their disposal for Friday’s free practice sessions, in order to give them an idea of the characteristics of the 2013 tyres.

The compounds and construction of the slick tyres will be different, so this will be a valuable opportunity for the drivers to prepare for next year.

But with the title fight so closely balanced, many drivers will prefer to concentrate on Brazil: just one of the many crucial strategic decisions that they will have to make over the course of the weekend.

Paul Hembery, Pirelli’s motorsport director says: “We’ll be bringing some of our 2013 prototype tyres to Brazil in order for the teams to get a taste of them during free practice.

With no testing until February otherwise, this will be an extremely valuable opportunity for them to see what our new tyres are like as they finalise their 2013 cars – so let’s hope that it doesn’t rain on Friday!

Both the compounds and construction will be different, which means that the characteristics of the new tyres will be altered, with a wider working range and some compounds that are slightly more aggressive.

We’ve yet to finalise where exactly all the compounds will sit in relation to each other, which is why we are calling the tyre to be used in Brazil a ‘prototype’ rather than giving it a specific nomination, but it will be very representative of our general design philosophy next year.

We’re looking forward to hearing the feedback from the teams about it, and of course sending our 2012 tyres out in style at what is usually a very demanding and thrilling race in Brazil, watched by some of the most passionate and welcoming fans in the world.”

Bruno Senna (Williams F1 Team): “Interlagos is a tough track for the tyres because you have quite a few traction zones that put lateral loads on the tyres and most of these traction zones are coming from low speed corners.

At the same time some of these corners are just flat where you use the DRS and KERS at the same time, so that definitely gives the rear tyres a hard time.

The front tyres have a very easy time in Interlagos: they really don’t do much work. The severity also comes from the fact that the track is bumpy, so they slide even more.

So all these things together put a big stress on the tyres and normally make the race more than a one-stop race because the tyres slide so much.

I am really excited about racing at home again. This is my third time racing in Brazil, but I never raced there before with Formula One. I think it is becoming one of my favourite tracks.

It is so technical but at the same time there is a good vibe from the crowd which really pushes me to try and achieve even more and I think it will be quite special this year.”

Lucas di Grassi, Pirelli’s test driver says: “Interlagos is actually where I started my career in go-karts and it is one of my favourite circuits, with a bit of everything, plenty of elevation changes, and a nice rhythm.

I believe the track has the highest altitude on the F1 calendar, around 700 metres, which has a big influence on both downforce and engine power.

From a tyre point of view, the hard and medium tyre choice should be good. Although the surface is very rough, Interlagos won’t consume a lot of tyres: the corners aren’t so fast and it won’t place as many demands on them as Suzuka, for example.

Also, we have chosen tyres that are more on the conservative side here. The medium will be the fastest tyre and this will probably be best for qualifying.

I suspect it will be a one or two-stop strategy this time. The only unpredictability is the threat of rain but that could make the race even more interesting now that the championship is still wide open.”

HRT will be facing its own challenge at Interlagos