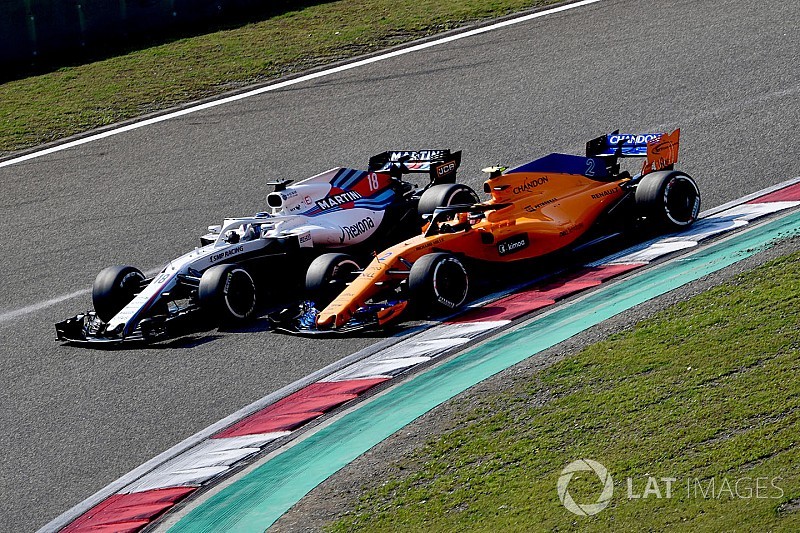 Formula 1 teams are actively helping FOM and FIA with its research into improving overtaking by contributing CFD resources to the project as the deadline for 2019 regulation changes approaches.

It’s the first time in a decade that teams have been involved in such research, which was previously conducted under the auspices of the FIA’s Overtaking Working Group.

After an inconclusive meeting in Bahrain on the subject, teams agreed to conduct their own research, and their results will be fed back into the project. The official deadline for technical regulation changes for 2019 is April 30.

Williams technical chief Paddy Lowe, then at McLaren, was one of the key players in the original Overtaking Working Group.

Created by the FIA and led by Lowe, Ferrari's Rory Byrne and Renault's Pat Symonds, it steered the aerodnynamic rule changes that were adopted for the 2009 season.

“The proposals that have been made jointly by the FIA and FOM are based on FOM research, which is additive to the work done by the OWG,” Lowe told Motorsport.com.

“And some of these recent discoveries of this further work are quite fascinating in terms of how they follow on from the OWG.

“If you recall the OWG was created in a context where there was no central R&D for the sport, and the teams funded that work, $50,000 each for that programme, which didn’t buy an awful lot of work.

“It ran a programme and it stopped at that, and I think it is fantastic the new owners of F1 are invested in central research to properly study and develop regulations based on science.

“If that had existed back then, having created the OWG cars in 2009, what would have been perfect in retrospect would have been to have a follow-up programme a year later looking at cars that had been produced.”

Lowe pointed out that the current focus of the FOM research – the effect of outwashing front wing endplates – is a more recent development.

“One of the most interesting things immediately those cars came out, teams created outwashing front endplates, which were never studied in the OWG programme.

"What they are finding now, the hypothesis is that those outwashing effects are highly detrimental to the process and the structures that were identified by the OWG, which is really fascinating.

“What is happening now is the FOM group has done some work and they have now asked the teams to do their own study off the same proposal, and see whether with using team CFD they can demonstrate the same relationships that FOM and FIA believe will improve overtaking.

"That is being done in the remainder of this month.”

Lowe is confident that the extra research will help to move the debate on, and that changes can be made for 2019.

“I think it is a live topic and something that will be developed, researched and discussed over the next few weeks. There is a regulation cut-off at the end of April.

Is F1's Mercedes era really over?