Sao Paulo ­– The Formula One teams got their first taste of Pirelli’s 2013 tyres during free practice in Brazil, with the Italian firm bringing two extra sets of prototype tyres in addition to the usual allocation of P Zero Silver hard tyres and P Zero White medium tyres that have been nominated for the weekend.

The teams used the 2013 prototype tyres mainly in the morning session, which were distinguished by orange writing on the sidewalls. 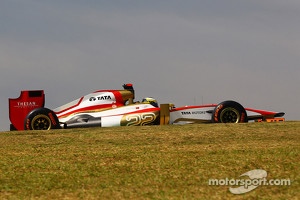 The prototype tyres seen in Brazil have a different structure compared to the 2012 tyres, using the current hard compound, but with a quicker warm-up time as well as deliberately faster degradation.

Daniel Ricciardo (Toro Rosso), Vitaly Petrov (Caterham) and both HRTs were the only drivers to use the prototype tyres at the start of the afternoon session, which got underway in ambient temperatures of 32 degrees centigrade and 46 degrees of track temperature.

These unusually warm conditions are not expected to last though: tomorrow should be much cooler for qualifying while there is a 100% chance of rain on Sunday: a hallmark of the already demanding Interlagos circuit, which places a lot of stress on the rear tyres in particular due to its traction loads.

This gave all the teams – particularly the two championship protagonists – an interesting dilemma: whether or not to concentrate on qualifying performance, which will be in held in the dry tomorrow, or to work towards a wet set-up that will be useful for the race.

All the remaining drivers used the hard tyre at the start of the second session, which was also the only tyre apart from the new prototype used in the first session.

The fastest time of the day was set by McLaren’s Lewis Hamilton with half an hour to go on the medium tyre: 1m14.026s.

Hamilton – who has never led a lap in Brazil despite winning the 2008 title at the Interlagos circuit – was fastest in the first free practice session in the morning, with a time of 1m14.131s on the orange-marked prototype tyre.

Pirelli’s motorsport director Paul Hembery said: “With testing opportunities so limited in Formula One, we wanted to give teams the opportunity to try out our tyres before the first official test in February next year, so that they can start to understand how the new tyres interact with the current cars.

The initial feedback we received has been very positive: the tyre that the teams tried today has a different structure with a faster warm-up.

This delivers extra performance within a wider working range, due to increased cornering grip, which is exactly what we were aiming for.

When we combine the new structure with the new compounds for next year we will see the full performance potential.

As for this weekend, the high temperatures that led to quite a significant degree of degradation today, particularly on the rears, is not expected to last, so we are very likely to see the Cinturato Green intermediates and Cinturato Blue full wets during the race.

We’re expecting at least a two-stop race, but if there is wet weather or safety cars involved, then all that could change significantly.”

Caterham ready for qualifying and the race on Brazilian GP