Red Bull Racing was one of the last teams to show its hand ahead of eight days of testing in Barcelona that will put the new generation of cars through their paces.

The new regulatory framework lends itself to Red Bull's high rake philosophy, which as we've already seen from the other teams' launches is more of a feature of the entire grid this year. 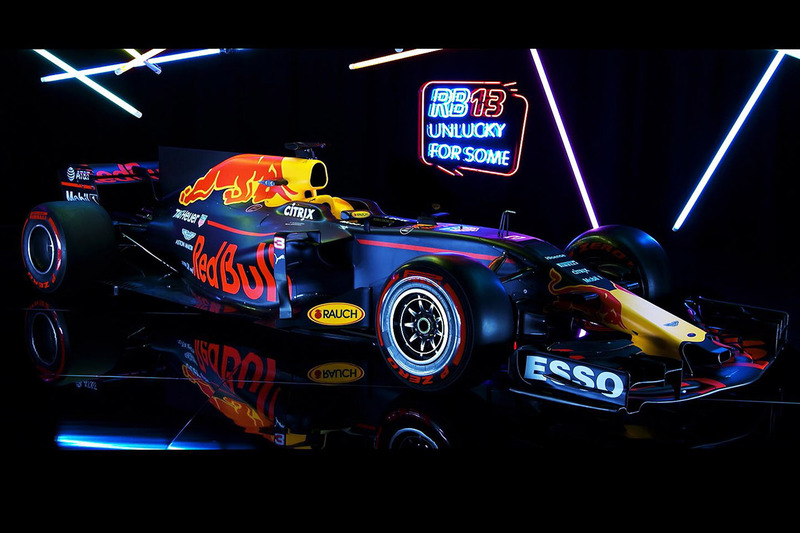 At first glance the RB13, like its predecessors, seems like a clean design with elegant lines that define flow into critical areas of the car rather than using abrupt angular surfaces. 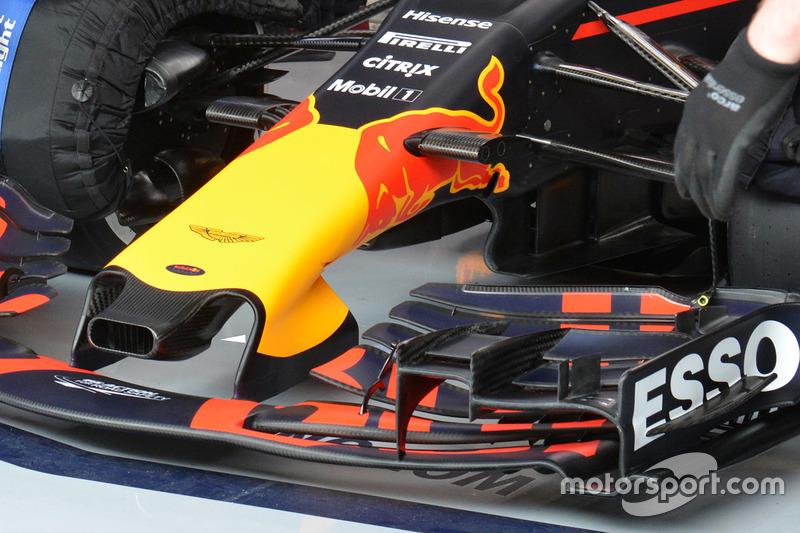 There are several interesting features that require attention, none more so than the thumb tip of the nose which has been granted a rather large cavity. Inside this cavity are several vanes that allow the nose to circumvent the cross sectional rules that the FIA has in place in order to limit the overall complexity and shape of the nose structure.

The primary function of this design decision is that airflow taken in by the inlet can then be passed straight out behind the thumb tip structure (white arrow), improving flow under the nose as the team looks to neutralise the impact of the thumb and perhaps even leverage the front wing's neutral section.

The rest of the nose is just as interesting, as we can see a small teardrop shape that appears just behind the mounting pillars, which possibly feed a small jet of airflow from the main nose tip cavity, energising the side of the nose.

The lower chassis cooling slot that extrudes up the side of the chassis is also retained, even though the solution's legality was questioned during the off-season. 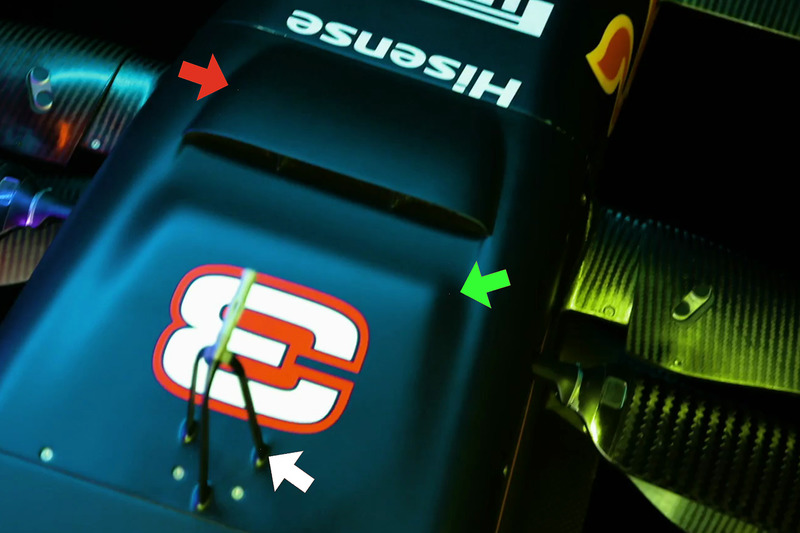 The team had to forsake its 'S' duct solution for 2016 as it placed the suspension rockers as high as it could, and while it still has the same extremely high position this year the team has worked around the issues it had before by using the vanity panel to their advantage.

This has led to the outlet being placed toward the front of the panel (red arrow), while a large blister is present behind it (green arrow) in order to facilitate the additional height needed for the rockers.

It's unclear at present if the 'S' duct is fed airflow from the nose tip cavity as part of a multi-function solution or whether another inlet resides under the nose. It has also pushed the pitot tube rearwards and simplified the structure to limit its aerodynamic impact as it now resides within a tripod. 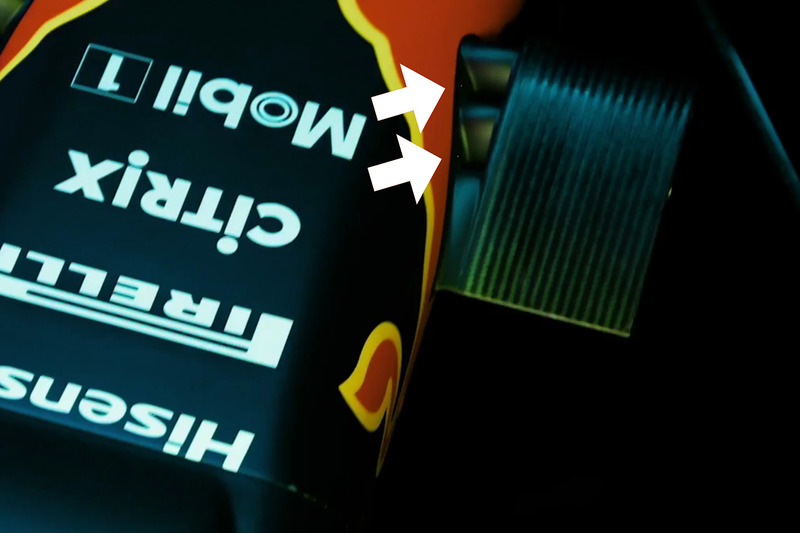 The neutrality of the FOM camera housings has been called into question for some time now, with the FIA hoping that creating a legality box for them to fit within in 2014 would draw a line under things.

However, we know nothing could be further from the truth, with teams looking to place them in positions which provide aerodynamic assistance.

Stalks became prevalent between 2014-16 but the FIA have toughened up on this practice for 2017. Don't be fooled into believing that's the end of the matter though, just as Red Bull is proving here with slotted mounts (white arrows) used to conveniently bridge the gap between the nose and camera housing.

Note from the previous image how the housings are just conveniently placed on the crease in the nose too, with airflow ushered toward them and then redirected in a more desirable manner. 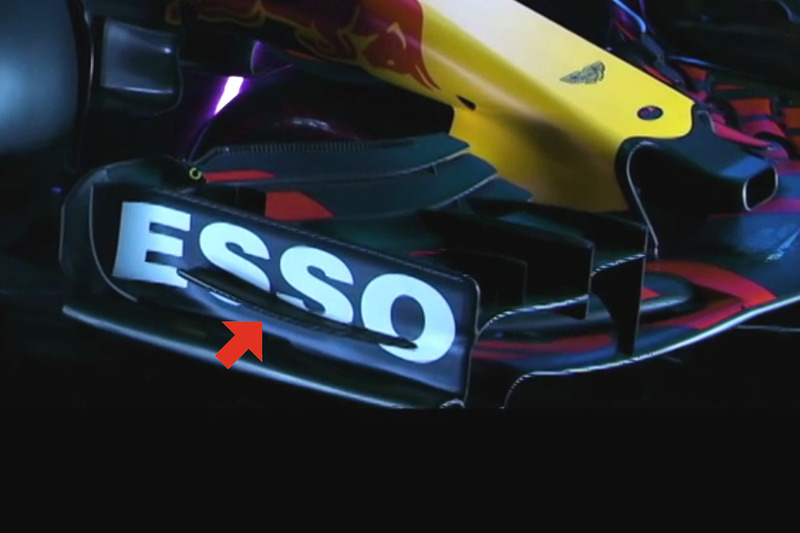 The front wing follows the lineage of designs the team have employed over the last few seasons although there may be changes throughout testing as the team looks to make improvements to its performance.

One area it has made changes to is the endplate canard (red arrow), with an elongated triangular shape employed rather than the rectangular shaped one that it has used before. It has also retained the blown axle which works with the front wing to alter the shape of the wake shed by the front wheel, improving flow downstream. 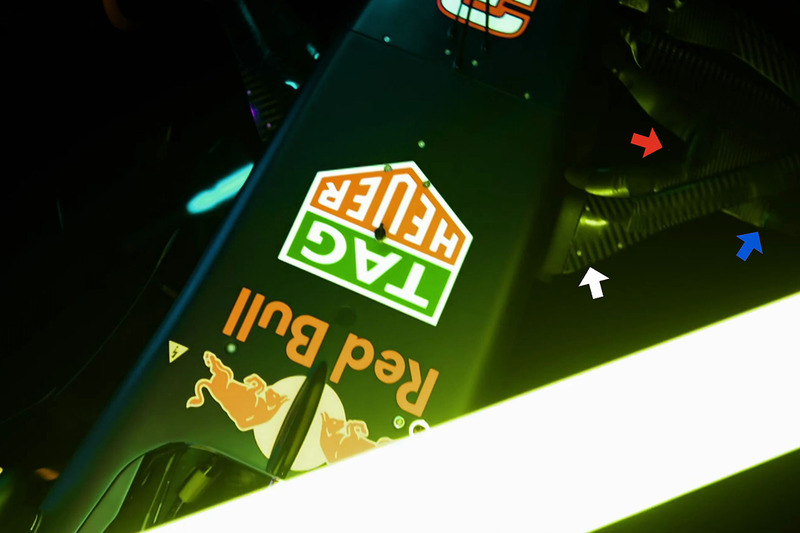 There has already been much debate over the hydraulic suspension systems that Mercedes and Red Bull have been running, but they'll continue to be put to use this season unless someone protests the design and the FIA rules in their favour. As such the RB13's suspension layout is remarkably similar to its predecessor.

The conjoined lower wishbone has been retained, albeit with a larger gap at the inboard section (red arrow). The enlarged overhang at the trailing edge is also present (blue arrow) but the team has made changes to the position of the rear leg of the upper wishbone (white arrow), pushing it much further down the chassis for aerodynamic gains. 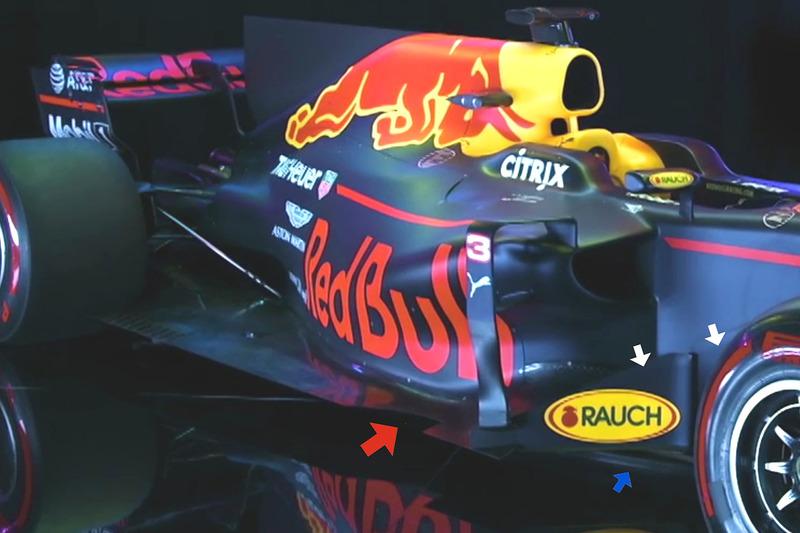 The area between the front wheels and sidepods will be one of intense development from this season onwards, with numerous aerodynamic surfaces set to increase the complexity of the region.

Primarily this will centre on the bargeboards, which are significantly longer than the ones we've got used to since 2009.

In Red Bull's case, the bargeboards shown on its launch car are relatively basic, especially when compared with what we've seen from the likes of Mercedes and Renault, and while we have yet to see them detail in full, the images do present a two-piece arrangement (white arrows), with the latter part converging on the floor's extended axehead.

It's unclear due to the low quality of the images available what else is going on in this region of the car but there does at least appear to be some strake work under the bargeboards, perhaps in a similar vein to the W-Floor used by Mercedes last season (blue arrow).

The sidepods are typically skin-tight for Red Bull, with the surface rapidly tapering down from the inlet and seemingly hugging the radiators inside, leaving an extreme undercut for the airflow to follow rearward toward the coke bottle region, which is exacerbated by the overhanging cooling outlet above.

The cooling inlet is skewed to face the chassis as is ordinarily the case of Red Bull designs in order to narrow the opening. The leading edge of the sidepod is angled downward but devoid of the regular cockpit fin or vortex generators we are used to seeing in order to help enhance flow over the surface.

Instead, there is just a singular narrow airflow conditioner, which arches over to frame the shoulder of the sidepod before twisting at its base where it sits astride the bargeboard.

The floor has a cut-out just behind this (red arrow) as the team looks to define the movement of air around the sidepod and under the floor.

A shark fin tops the engine cover, but its blank appearance suggests it was a little bit of an afterthought - not only because the team has worked hard to reduce the size of the airbox inlet, which can disturb the rear wing due to its lower position this year, but also because the team had lobbied in the strategy group to have them banned.

The airbox not only features a more slender inlet but has also been redesigned to feature just a single support spar, reducing weight and lowering the centre of gravity. 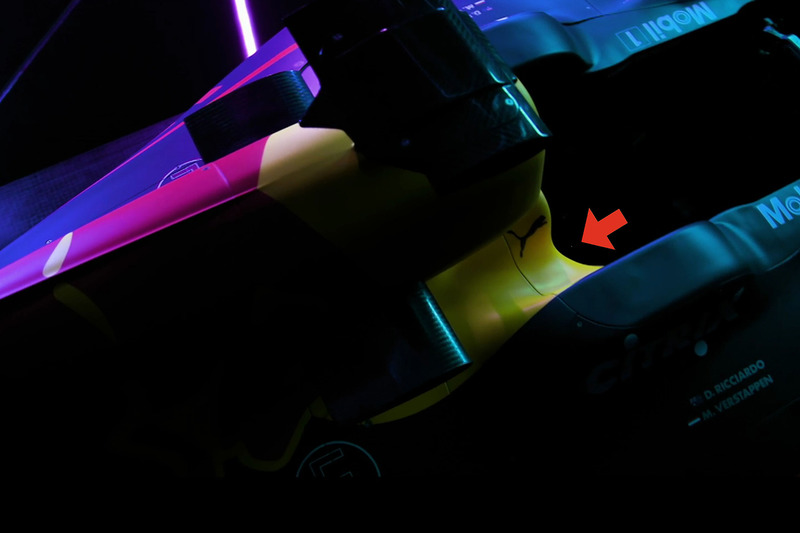 Another interesting feature of the RB13 is the cockpit surround, which has been tapered around the side supports and should allow more air to follow the lines of the sidepods and engine cover rather than becoming a disturbance to the rear wing downstream. 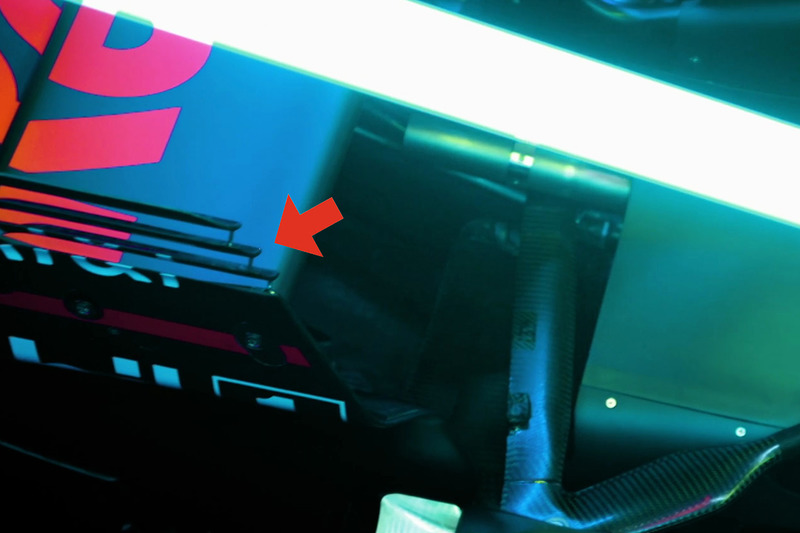 The rear wing seems outwardly simplistic, but it does feature a cue from its sister team with open-ended style louvres the order of the day, while the wing is supported by a single centreline pillar which connects to the engine cover similarly to last year.