Tech analysis: How much did brake-by-wire contribute to the Mercedes clash?

While the stewards concluded that Nico Rosberg was at fault for the collision with teammate Lewis Hamilton on the last lap of the Austrian Grand Prix, opinions among fans remain divided about who was to blame for the crash.

And while that debate will focus on racing lines and who turned when in those crucial milliseconds at Turn 2, there are several technical issues surrounding tyres and brakes that played just as big a part in the incident.

Hamilton's 'Plan A' was to perform a one-stop race, switching from a long first stint on the ultra softs and finishing on an even longer second stint with the soft tyre.

However, the safety car really brought Rosberg into play, locking the Mercedes pair into a battle for the lead that meant Hamilton would have to make the move work on track as he could no longer make the stint length work and a two-stop was deemed the safer bet.

As both drivers moved onto a two-stopper it was another strategy element that cropped up in the last stint of the race – revolving around the available tyres left.

Hamilton only had a set of used super softs or used softs available to him, whereas Rosberg's allocation left him without the option of the softs, having run them in the previous stint, so the German and his engineers were forced to use a new set of super softs. 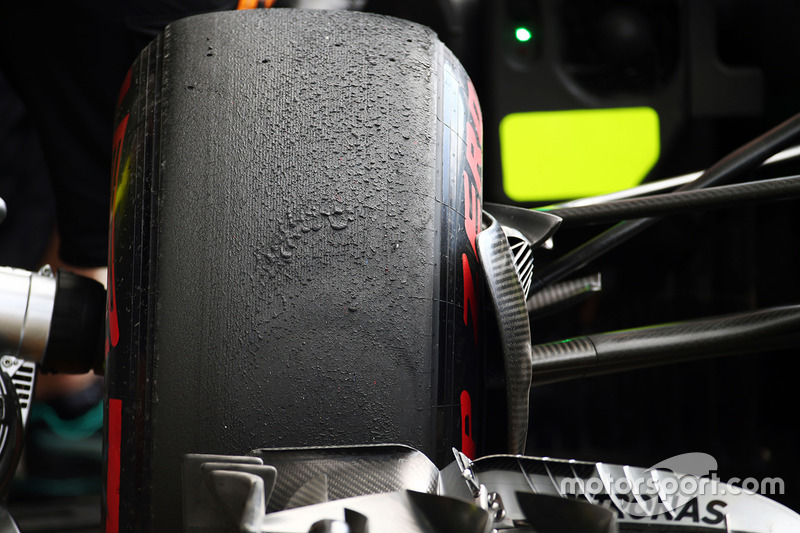 Mercedes seemingly avoided the super soft tyre where possible over the weekend, with the red-walled tyre in the low working range (85-115C).

It put Rosberg in a position at the end of the race where he'd suffer from much more thermal degradation than his teammate, who was now shod with the higher working range soft tyre (100-125C), which could be worked harder by the Brit and still give a similar performance delta.

But the final factor that shifted things in Hamilton's favour for a last-lap move involved brake issues, with both drivers struggling with brake temperature problems.

This could be seen when a dark carbon dust cloud was regularly expelled from the wheel rim under braking.

The final nail in this coffin was Rosberg's brake-by-wire failure which allowed Hamilton to close in turn one and almost certainly played a part in their collision in turn two.

"But then it was constant. I had 1/2/3 corners before that to get a feel and get used to it and in braking for Turn 2 I had a good feel and had everything under control."

So what does this mean?

If the driver is using too much rearward bias it can lead to the overheating of the brake pad material as it is overworked, and the air entering the cooling duct cannot fulfil the task at hand.

It was the same kind of failure that had hit Rosberg at the 2015 Bahrain Grand Prix - and had caused him to run wide on that occasion.

In the video above we can see that even accounting for its past failure, Mercedes still opts to utilise a smaller disc and four-piston caliper at the rear of the W07. This saves weight but presents more of an issue when the mechanical braking system is put under strain.

Hitting him at the end of the penultimate lap – with two quick corners – meant that the first time he leaned on the brakes with relative force was at Turn 1 on the final lap.

Did that hurt him then through Turn 1, when he clouted the kerb on the inside and lost a bit of traction on the exit which allowed Hamilton to chase him down?

And how much did it cloud his thought process as he picked his braking point and angle for Turn 2? It would have been the first time he needed to come down from maximum speed to a slow speed corner, so he would have been mindful not to get it wrong, lock up and run wide – opening up the door for Hamilton to slide down the inside and on to victory.

Only Rosberg will know the true answer to that.

Whilst Toto Wolff and Niki Lauda have their hands full deciding how to take things forward with their warring drivers, Paddy Lowe and the rest of the Mercedes engineers will be poring over the data to try and better understand what unfolded during the race and how they can improve things going forward.

Blash to step down from FIA role after 2016