Tech analysis: How Mercedes tamed its 'diva' in Japan

Mercedes arrived in Japan hoping to lay to rest the ghosts that blighted its relative pace to Ferrari and Red Bull in the last few races.

The upgrade package that was tested by both drivers in Malaysia, but only raced by Valtteri Bottas, was to be utilised once more, with data collected suggesting that the real-world package correlated with the CFD and scale versions tested back at the factory. 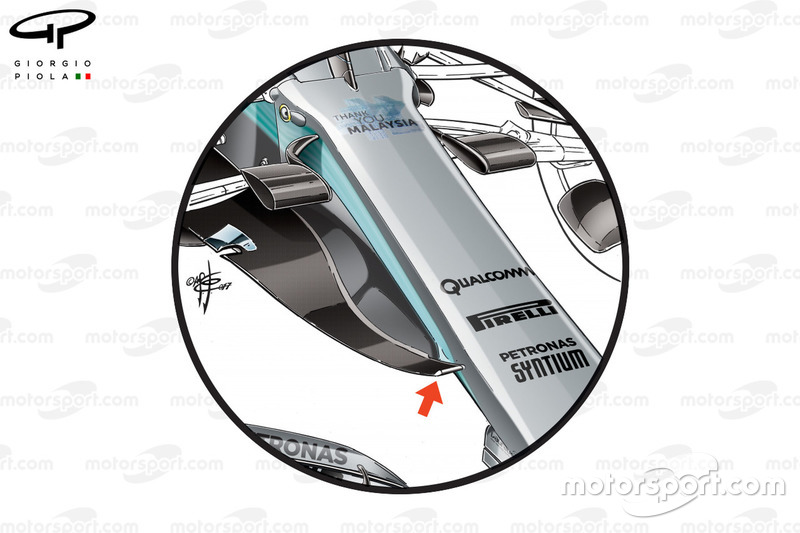 The package featured a revised front wing and nose 'cape'. The huge aerodynamic overhaul posed by the 2017 regulations forced many, including Mercedes, to drop development much earlier last season, with Mercedes all but done with updates by the summer break.

Visually, the introduction of a wider leading profile on the nose cape was inescapable when it was debuted in Malaysia (red arrow). However, what was not initially noted was the effect this had on the shape of the nosecone itself, with it needing to be modified to facilitate the wider cape.

Changes of this sort require a fresh crash test in order to obtain the FIA’s approval, something the team had to complete prior to signing off on the update package and shipping it out to Sepang. 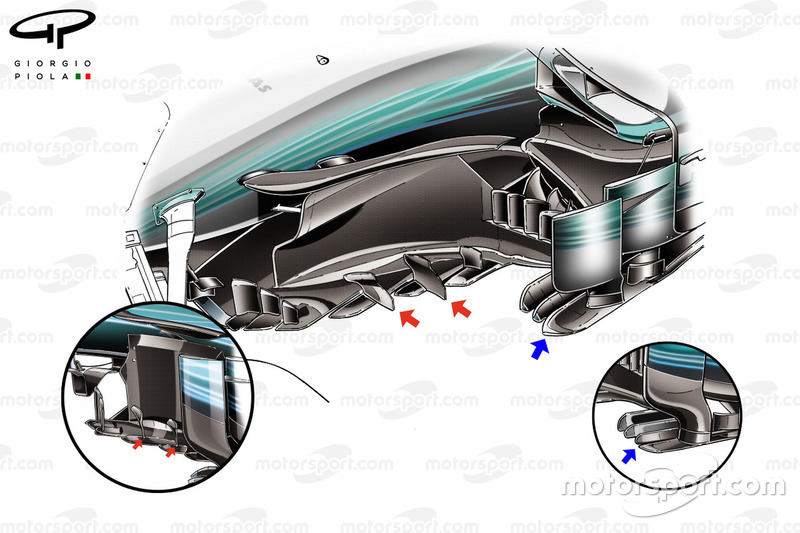 The W08’s bargeboards were a complex affair from the moment the car was revealed, but an update in Spain which saw some additional r-shaped fins sprout from the serrated footplates (red arrows, inset) added another layer of complexity.

The update introduced in Malaysia raised the stakes once more, as the two forward-most of these fins were extended outward (red arrows) in order to influence the direction of the airflow as it passes by. 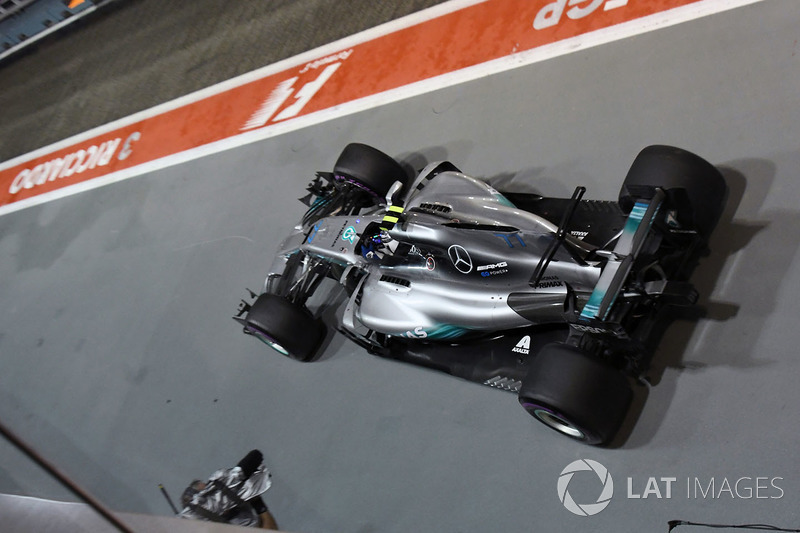 Mercedes introduced a new shark fin in Singapore, featuring a full-length surface that met with its independently-mounted T-wing pillar.

Designed to be used in combination with its novel chimney outlet to help overcome the heat and humidity present at that race, it was carried over to Malaysia too.

The use of this chimney changes the amount of cooling needed elsewhere, with other teams needing to open up the lower cooling outlet much more in comparison.

The chimney not only has a cooling effect, but also leads to a different aerodynamic profile, with the engine covers bulk increased high up, rather than at a lower level. This undoubtedly has an impact on the interaction of the rearward flow structures generated by the diffuser and rear wing. 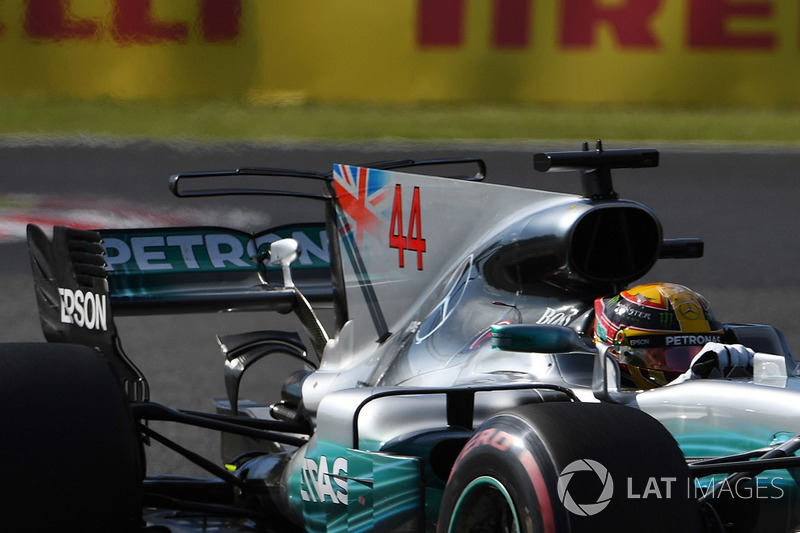 With this in mind, the altogether cooler climes of Suzuka meant that Mercedes could go a different way, as it used a new version of its elongated shark fin this time without the cooling chimney. 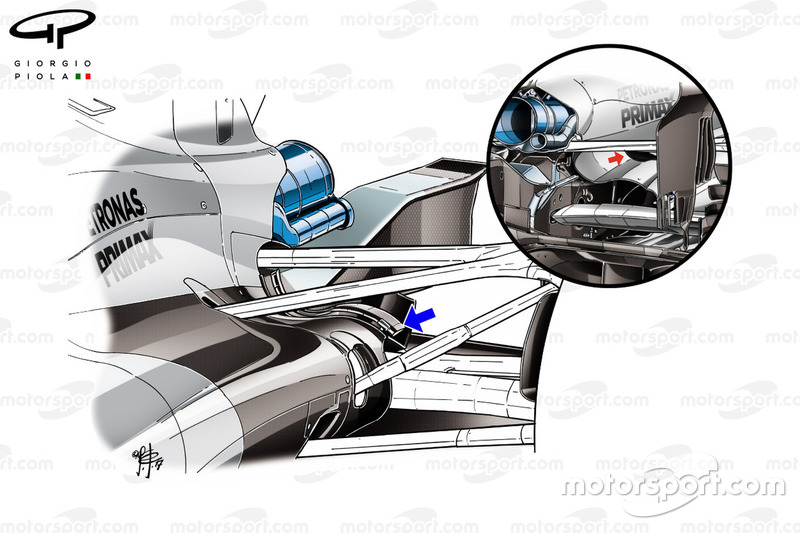 This paved the way for the return of trailing edge flap on the rear of its cooling outlet (blue arrow), rather than the smaller outlet with the supplemental cutaway around the upper rear wishbone (red arrow). 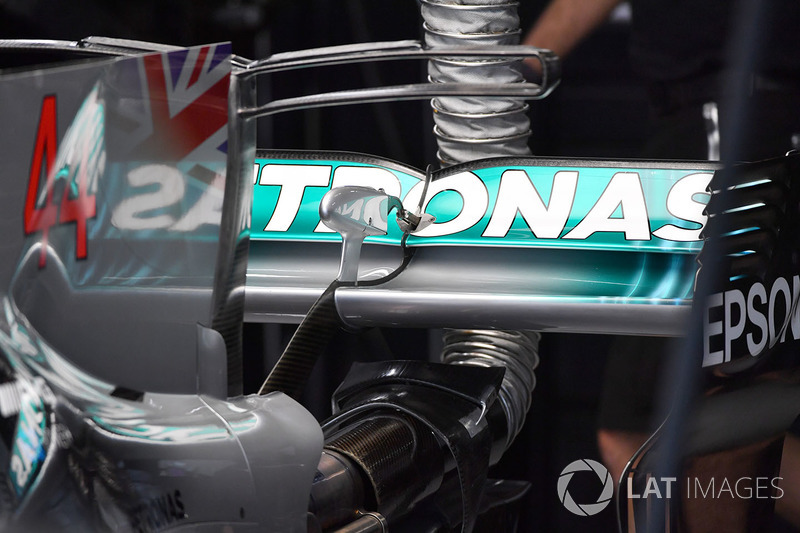 The team continued to use its high-downforce rear wing configuration in Japan, just as it had in Malaysia.

However, the upper flap chord height was reduced, changing its interaction with the mainplane, making it better suited to the circuit's characteristics.

Described as a 'diva' by Toto Wolff, the W08's issues seem to centre around the performance of the power unit at hot and humid tracks and the way it uses its rear tyres.

This is a problem that is exacerbated when track temperatures climb, the track surface is particularly abrasive or the pressures indicated by Pirelli fall below their own operating criteria.

These issues tend to rear their head when the team visits street or high-downforce circuits, such as Monaco, Hungary or Baku - all of which feature the aforementioned details.

Cooler temperatures, higher tyre pressures, a more conventional circuit layout and less abrasive asphalt saw a return to form for Mercedes, bringing it back in line with its rivals from an outright and race pace perspective.

Red Bull's introduction of new parts in the last few races took advantage of the team's development cycle, with the Milton Keynes-based squad delivering an update package in Singapore that enforced its performance at a circuit where it had been expected to do well.

The video highlights the changes made by the team, including the new sidepod deflectors which bear more than a passing resemblance to the ones used by Ferrari.

It goes on to show the wing mirror update introduced in Hungary, where the mirror itself was not only moved but is now found to be mounted on two stalks rather than one. 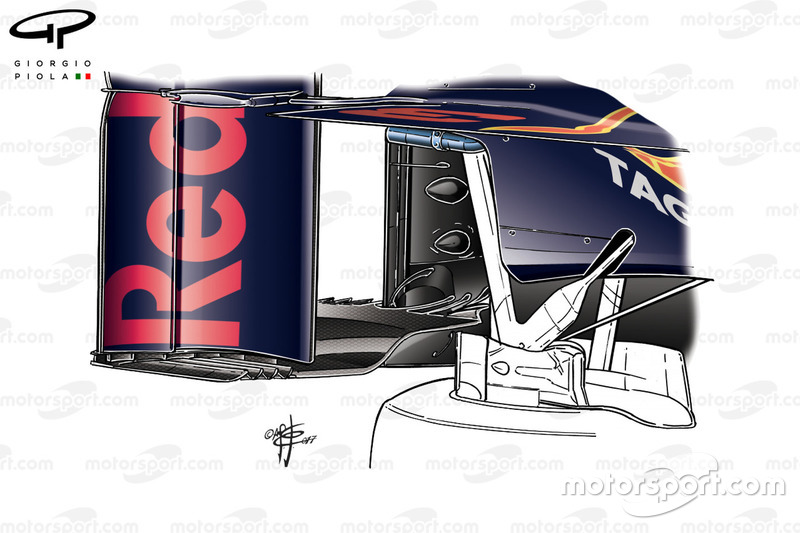 Not new - but a detail that seems to be unique to Red Bull - is the use of these teardrop shaped blisters on the upper surface of the diffuser.

Placing these convex obstructions in the path of the airflow as it passes over the latter part of the floor is important to improving the performance of the diffuser.

French GP practice as it happened