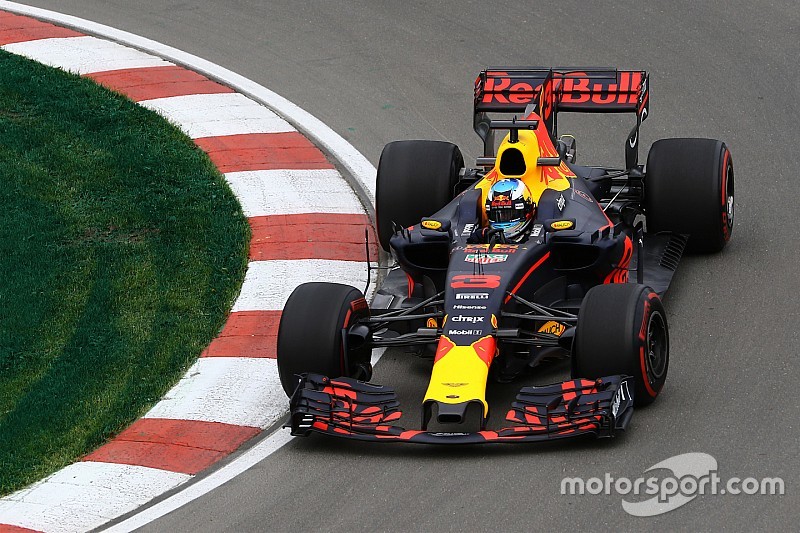 Red Bull endured a troubled start to 2017, but has made clear progress over the opening races of the campaign, with a further step seemingly made in Canada.

An update at the Spanish GP has given renewed signs that a recovery could still be on the cards and that the drivers might be thrust on the battle between Ferrari and Mercedes toward the middle of the season.

For Canada, the first medium-downforce circuit of the season, the team has another significant update package, looking to put previous results behind it and attack the latter two thirds of the season with renewed vigor. 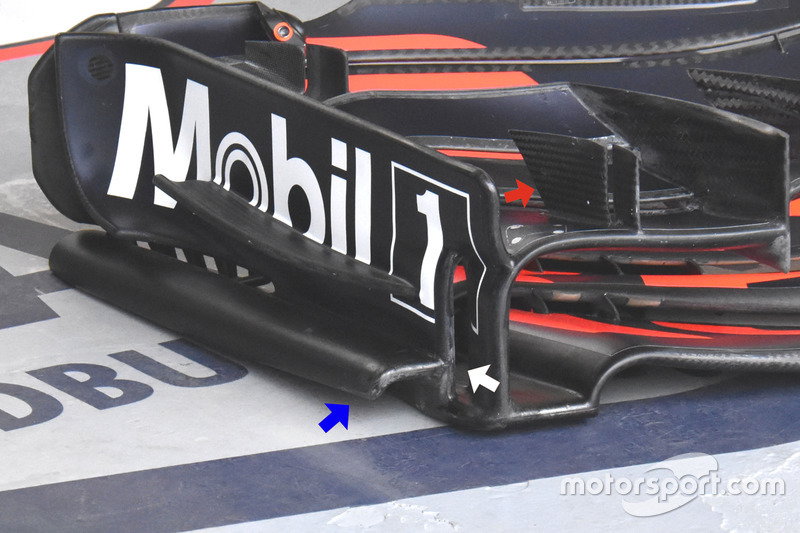 A vertical slot has been added to the leading edge of the endplate (white arrow) changing the pressure distribution at the outboard section of the wing.

It's a change that is combined with a revision to the outboard footplate (blue arrow), which has been set back from the leading edge and raised in reference to its usual position, in order to change the shape and position of the vortex that is generated by it.

The shape of the rearward strake housed within the main cascade (red arrow) has also been revised.

A holistic overview of these changes, rather than looking at them in isolation, shows a concerted effort to change how airflow moves across the front face and around the front tyre.

This changes the shape of the wake generated by the front tyre, which will also change how the surfaces downstream have airflow delivered to them. 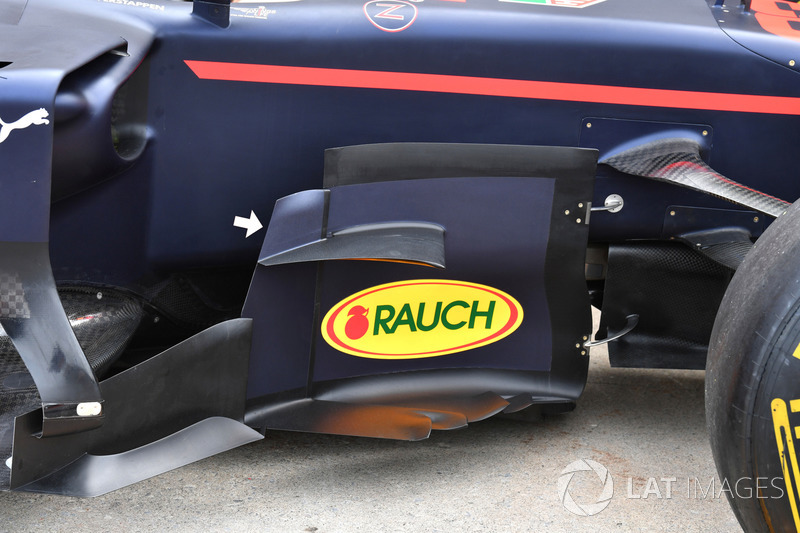 The modifications made to the bargeboards for the Spanish GP were optimized further in Monaco, with the main vertical element increased in height, while the secondary vertical element saw its shape changed on the trailing edge.

These tweaks have been retained for Canada as the team looked to take advantage of other localized alterations. 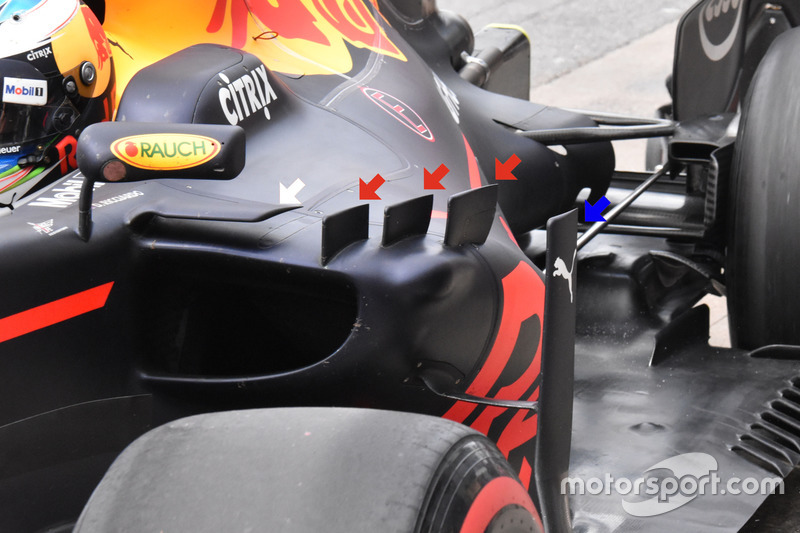 Another item that was revised for the Spanish GP and then altered further for the Canadian GP is the aero appendages that flank the sidepods.

Having previously arched over to meet a triangular panel affixed above the sidepod, the new deflectors have been simplified, returning to the simple vertical elements that have been used in years gone by (blue arrow).

This simplification has seen the sidepod's upper surface armed with three vortex generators (red arrows) staggered rearwardly on the outermost corner and a horizontal cockpit fin (white arrow), in a similar vein to how the McLaren MCL32 has been set up for some while now.

It's unsurprising given the similarity in the two team's aerodynamic philosophies that had began to diverge a little more this season, at least before this latest update from Red Bull. 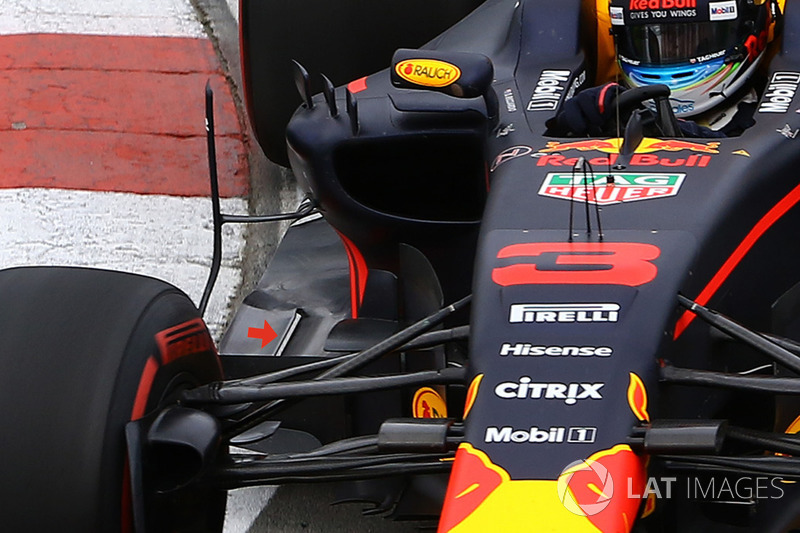 The floor's edge is now home to the type of longitudinal slot we've seen teams like Toro Rosso, Haas and McLaren employ so far this season, rather than the large wedge-style cutout that could be previously found in that location.

This changes the airflow's behaviour in a crucial section of the car, Red Bull aiming to take advantage of the design changes made upstream of it. 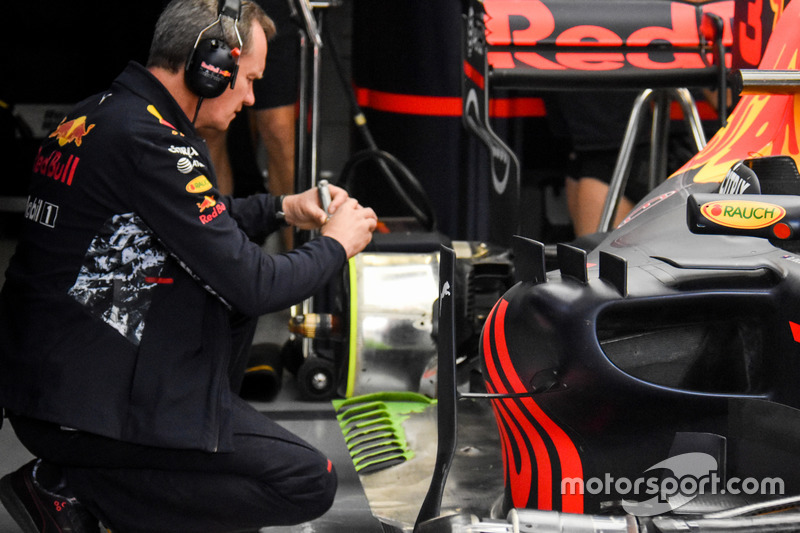 Further downstream, the floor has seen more modifications, with the slots that occupy the area ahead of the rear tyre and responsible for dampening the issue of tyre squirt modified.

The slots have been stood proud of the main surface, allowing more airflow to migrate under it while the last slot has been widened significantly, altering how airflow spills across the face of the tyre.

Lowe: Hamilton as fast as Senna, but not as ruthless