Monza is always something of an aerodynamic upset, with teams producing specialised rear wings solely for use around the 'Temple of Speed'.

This year, especially with the wholesale aerodynamic changes that have drastically boosted downforce, a concerted effort was made by all of the teams to reduce drag.

Ferrari's home race was always going to be one that stirred unwanted emotions for the tifosi, as the SF70H's characteristics make it weaker than the W08 on high-speed circuits.

It must also be noted that it is now significantly out of sync with Mercedes in terms of their power unit usage, with the scarlet team still able to introduce an updated, more powerful iteration later in the season.

This also means that from a tolerance and performance point of view it may well have already taken the best out of the parts currently in its allocation, giving it a stronger run-in on the circuits that are better suited to the SF70H when the new parts are introduced. 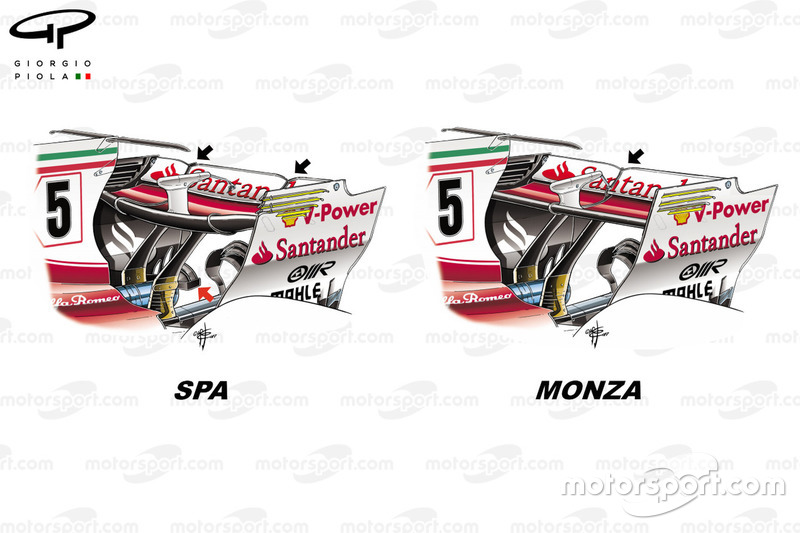 Knowing the challenge it faced at Monza, the team prepared an all-new wing for the event, making a concerted effort to reduce the amount of drag being generated.

Having previously used a spoon-shaped rear wing in both Baku and Spa to generate enough downforce when needed in the corners and counter the drag produced on the straights, the team switched to a more conventional-shaped wing for Monza.

The mainplane and top flap featured a singular, centralised slot gap separator and V groove, whereas two had previously been preferred (black arrows). The open-end style endplate louvres were dispensed, with and conventional ones used instead (highlighted in yellow).

The smaller of the two monkey seats that had found a home above the exhaust (red arrow) was also removed, as at lower speeds the rear wing, without the spoon shaping, didn't need the aerodynamic support it offers. 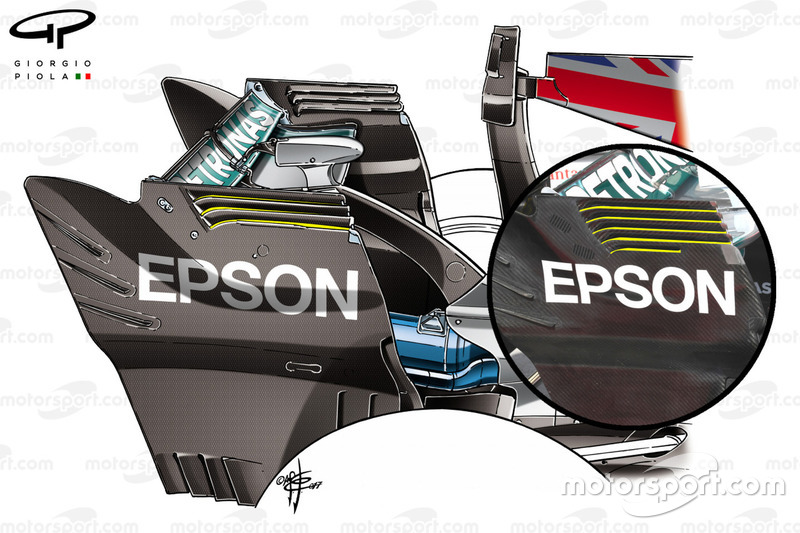 Mercedes, while dominant around the famed Italian circuit, did not bring a super slender or less complicated rear wing, instead favouring a similar design to the one it ran when drag reduction has been important elsewhere, such as Azerbaijan and Spa.

However, the wing did feature a less pronounced angle of attack and a revision to the chord length of both the mainplane and top flap, the latter of which was furnished with a more diminutive gurney flap.

The spoon-shaped rear wing already provides a significant trade-off between downforce and drag reduction, with the shorter chord outer extremities not only producing less downforce but also having a significant effect on the drag-inducing vortices created at the wing tips - often illustrated by contrails in damp conditions.

The design and number of endplate louvres often tally with the overall design, shape and angle of attack of the rear wing in order that they help to reshape and displace the aforementioned tip vortex. 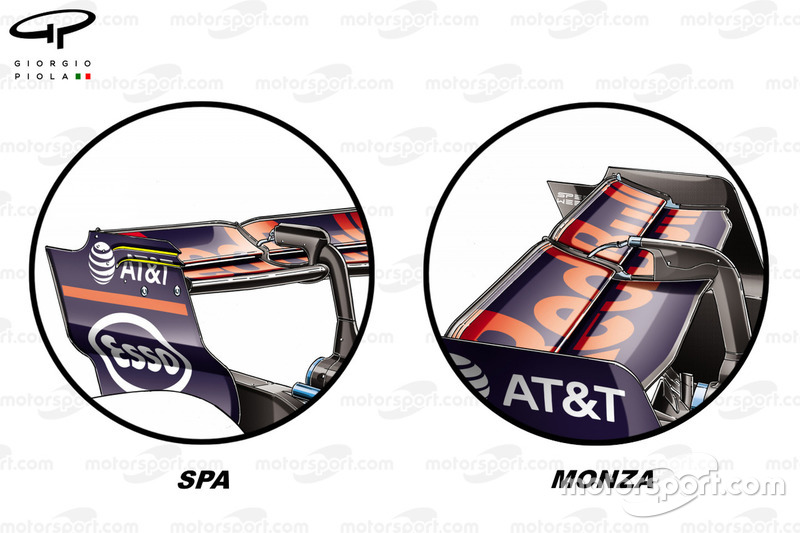 Having already asked Daniel Ricciardo to give its Monza specification rear wing a run-out at Spa, the Red Bull team knew it could provide its drivers with the aerodynamic gains they'd need to challenge at the front in Monza.

The wing, which features an extremely low angle of attack, follows the same trend the team have employed at Monza since 2013 (below), whereby the angle dictates that no louvres be needed in the endplates (see left inset for comparison, where the louvres have been highlighted in yellow).

You'll also note that due to the shallow angle of the mainplane the DRS actuator pod sits entirely on it, rather than above the surface. 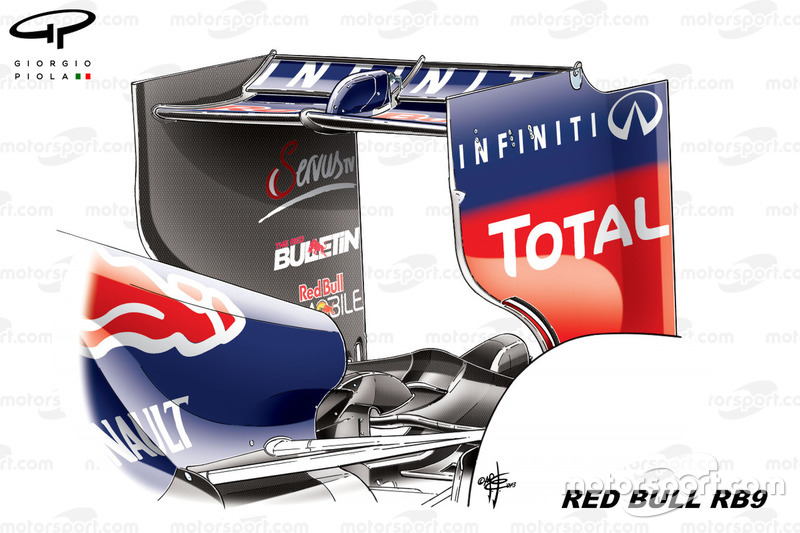 There can be no doubt that Williams has been struggling to meet expectations this season, as the FW40 has failed to deliver the kind of performance its predecessors offered.

The Italian GP was a kind one to Williams, with an out-of-character showing in a wet weather qualifying session and demotion of several challengers around them on the grid seeing Lance Stroll and Felipe Massa start the race in P2 and P7 respectively.

The drivers made different set-up choices too, which could be one of the primary catalysts for Stroll's better showing in qualifying than his seasoned teammate. 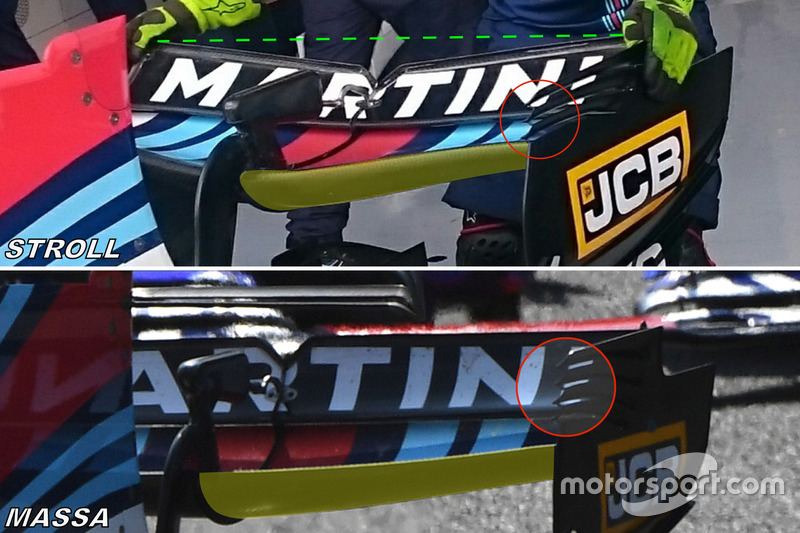 The lower downforce version featured a much gentler spoon shaping, with the curved leading edge of the mainplane both flatter (upper image, highlighted in yellow) and more sinuous, as the outer section curved rearward (lower image, yellow line).

The top flap's shape was also demonstrably different, as the angle was significantly reduced and bowed inward toward the centreline (green dotted line).

You'll also note that the endplate louvres were reduced from four to three on the lower-downforce configuration (circled). 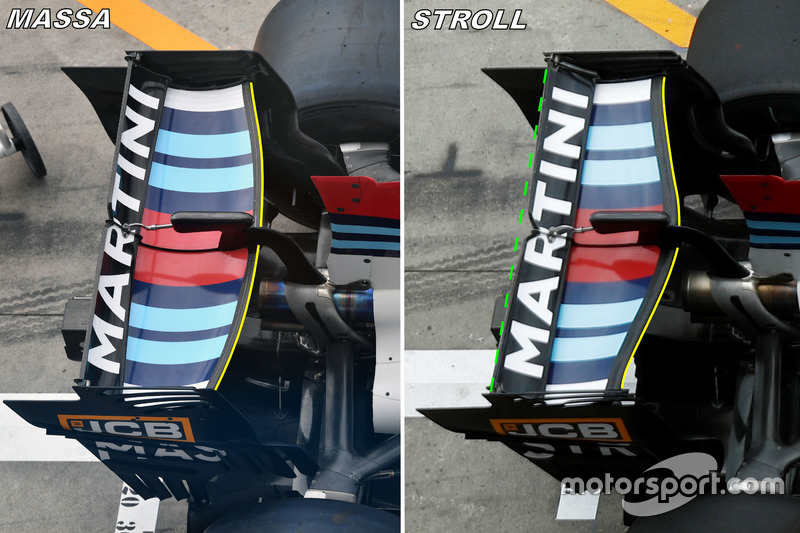 F1 has no "serious offers" from new teams - Todt