Tech analysis: The Ferrari changes that fell short in Austin

Ferrari has maintained its development assault in this last phase of the championship, arriving in Austin with a war chest of parts aimed at optimising the SF70H.

All of the parts being used were refinements, rather than full-scale conceptual changes, as the Scuderia looked to wring the last few ounces of performance from this year's car, while being mindful of the resources needed for next year.

As such, only Sebastian Vettel was outfitted with the parts, the team focused on the German’s championship challenge. 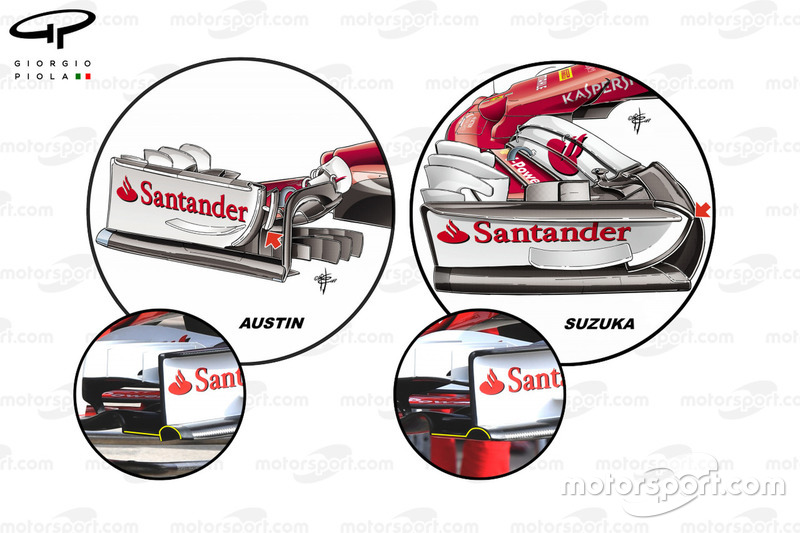 The new wing features a revised footplate arc, while the mainplane's leading edge has been set back to accommodate this (highlighted in yellow). This, along with changes to the arc’s inner surface, alters the shape and vorticity of the vortex that’s shed.

The endplate is much shorter but features the same outward curvature at its trailing edge. It's now complemented by another short and aggressive endplate (red arrow), which is anchored to the main one, changing the overall shape and direction of the airflow.

This is done in order to change the shape of the wake shed by the front tyre and influence the flow downstream.

The floor deck ahead of the rear tyre has been altered once more, as the team returned to a specification with five slots compacted toward the rear end, rather than the six slots used in the last few races.

The slots create vortices that help to seal off the area between the side of the rear tyre and diffuser, reducing the effect of tyre squirt - airflow pushed laterally into the diffuser's path by the tyre's deformation. 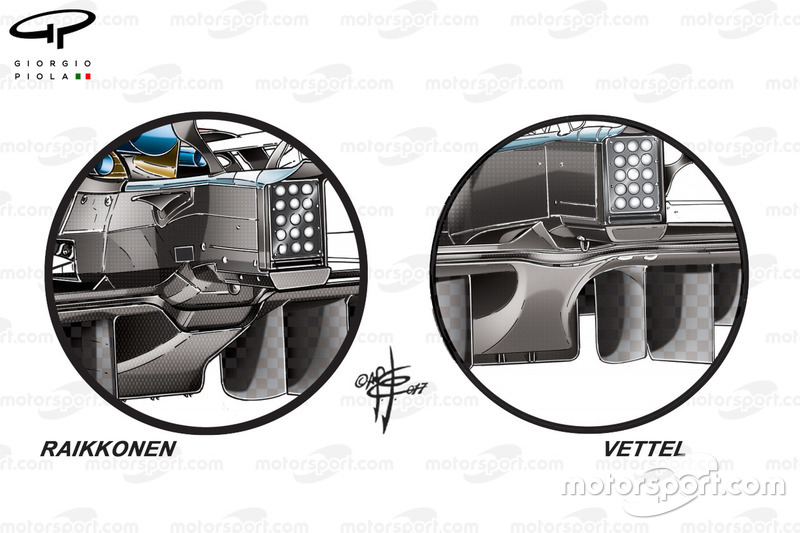 Making use of the changes ahead of it, the diffuser run by Vettel in Austin differed quite significantly to the one used by his teammate.

Much more akin to the diffuser design trialled at the post-Hungarian GP test but not run since, this one sees the central section flattened out significantly, changing the diffuser's overall size and its interaction with the outer sections.

Above the diffuser, a pair of winglets have been added either side of the crash structure as the designers look to help pull airflow through the diffuser.

Vettel: F1 must ask itself if money comes over morals