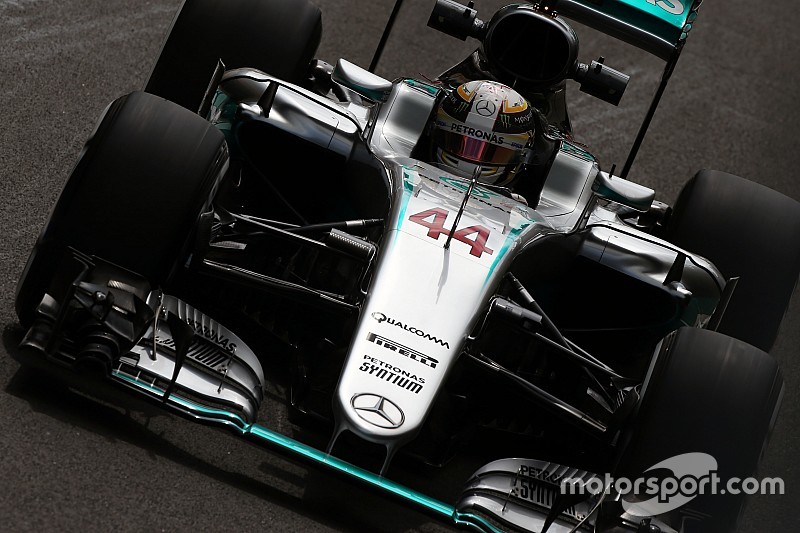 Mercedes is not easing up in its efforts to continue as the dominant force in Formula 1, as the updates it introduced for the British Grand Prix showed.

The German marque continues to impress with the sheer quantity of updates available for the W07 at each round of the championship, whilst continuing to address weaknesses that may have appeared in previous rounds. 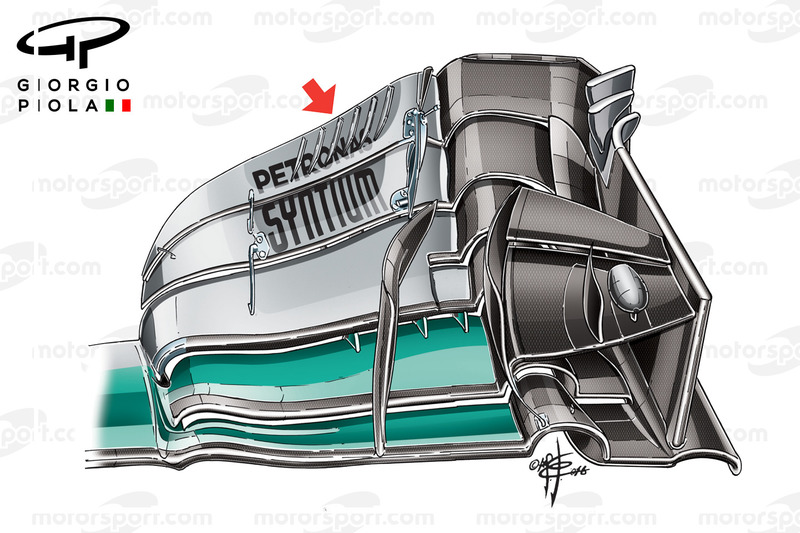 The front wing was pretty much unchanged from the Austria specification, albeit the gurney tab usually placed on the upper flap, over the flap strakes, was removed, trimming the downforce level of the car and changing the balance for the drivers. 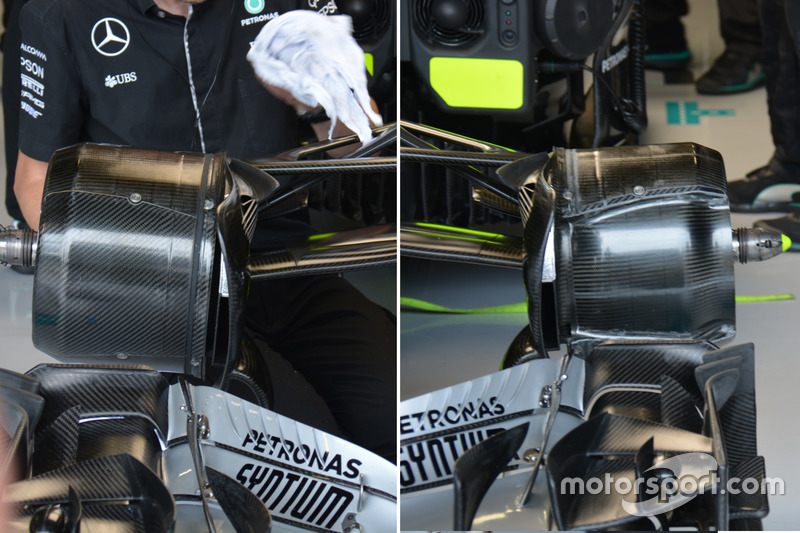 An asymmetric brake duct layout was utilised, with the fully enclosed drum used on the right hand side of the car, whilst the specification first used in Spain that features an airflow crossover was used on the left.

Requiring less cooling for the brakes on the long straights that are a feature of the Silverstone circuit, the team opted to close off the uppermost cooling inlet which sits between the vertical fence and the tyre's sidewall. 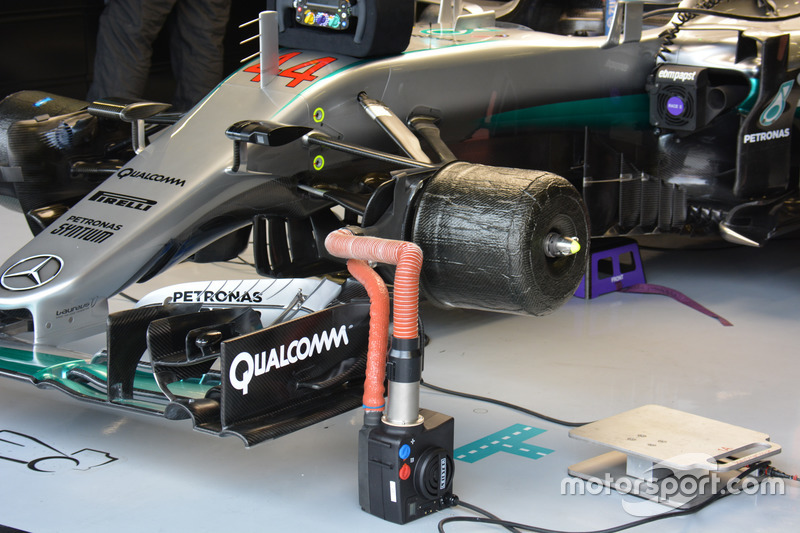 Interestingly, Mercedes adopted the use of its brake warming devices whilst in the garage at Silverstone, whereas previously it had only used these on the grid before the start of a race.

Their intent is to improve the temperature of the brakes for maximum performance once released out onto track. With Mercedes amongst many others who chose to close off its brake ducts, it shows how important the generation and retention of heat is in the performance of the brakes.

The multi-layered bargeboards that Mercedes introduced in pre-season testing have been revised in Silverstone, with the vertical elements reduced to five, whilst the strakes that protrude from the floors edge has also been reduced to eight.

This will change how the airflow moves around the sidepod's undercut and both over and under the floor downstream. 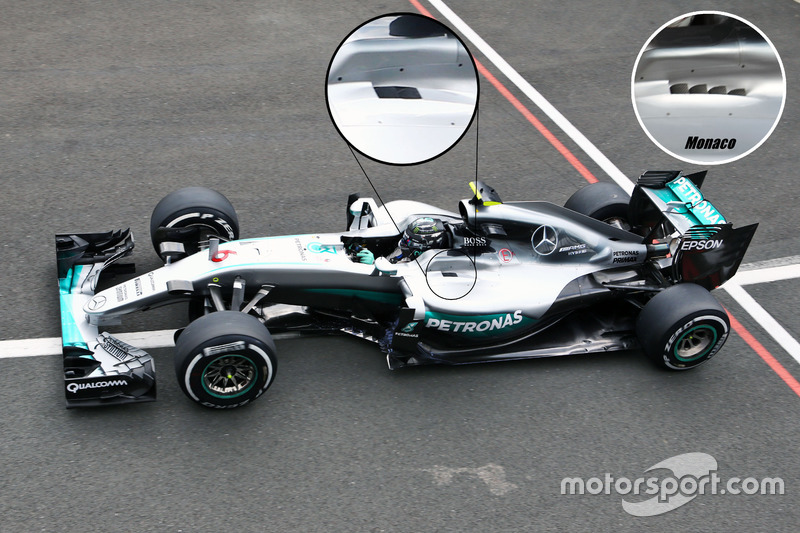 Temperatures differ from circuit to circuit and as such all teams focus their efforts on making changes to suit their surroundings.

These changes have a bearing not only the performance of the power unit but also the aerodynamics, and Mercedes is no exception in its quest to find the right configuration for the given circuit.

At Silverstone, the louvres placed alongside the cockpit have been reduced down to two (black inset), not only for the cooler temperatures but also because an open surface can come with a drag penalty. 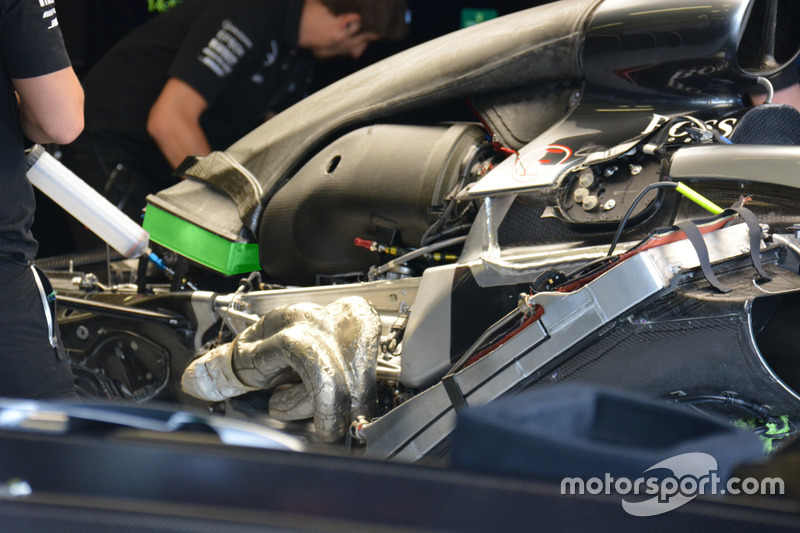 The ERS cooler mounted behind the power unit was changed for Silverstone (highlighted in green), which led to a change in the shape of the blister that covers it on the exterior of the engine cover. 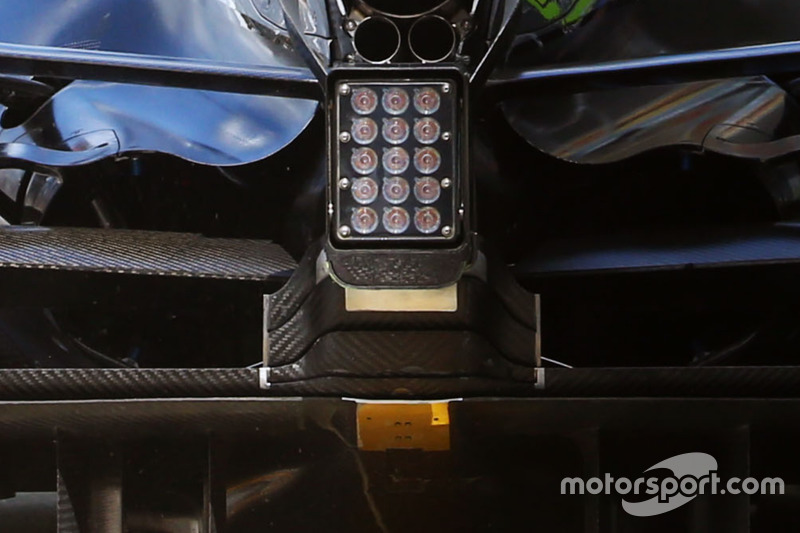 The 200mm winglet that sits between the crash structure and diffuser has also been revised, with the lowermost element now furnished with a slot, whilst the upper element is now split into two separate sections rather than being defined by two smaller slots.

Whilst this change may seem modest it is part of a holistic approach that helps to align the aerodynamic structures created by the diffuser, exhaust and rear wing. 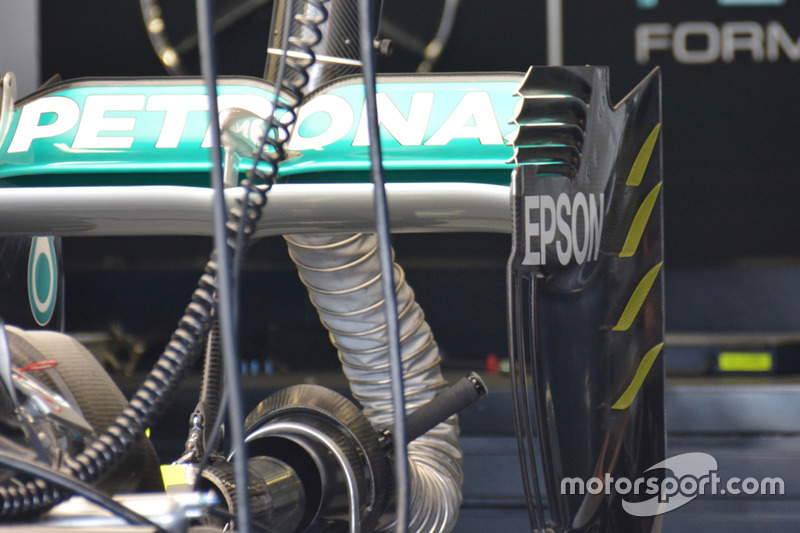 Mercedes has had several configurations of rear wing this season to suit the various conditions it has faced. At Silverstone a new rear wing was deployed by the team though, featuring the same sort of revolutionary endplate louvres first used by Toro Rosso in pre-season testing. (below)

The louvres are shaped in a way that exposes them as slots to the airflow, with a metal bridge used on the leading edge to retain their shape.

Four strakes were also been added to the endplates in order to break up pressure and upwash the airflow. The endplates have been reduced in thickness in this area, in order that the strakes can form part of the 20mm maximum width. 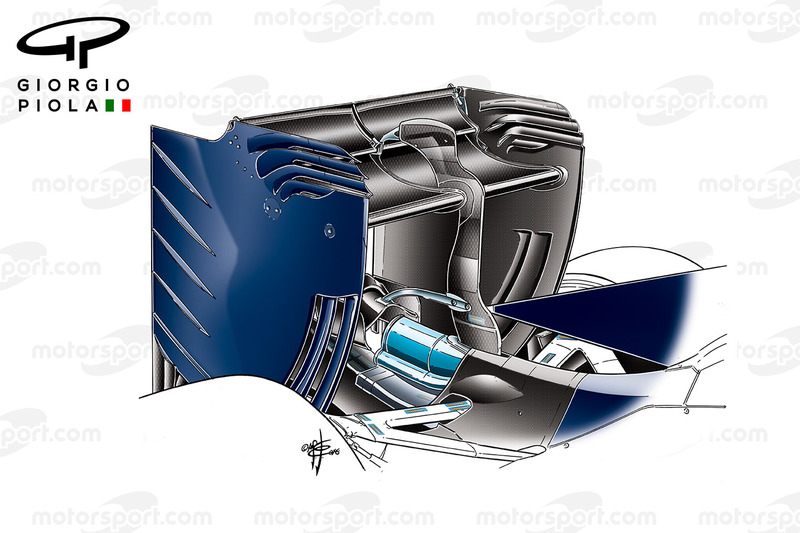