The Bridgestone and Ferrari partnership 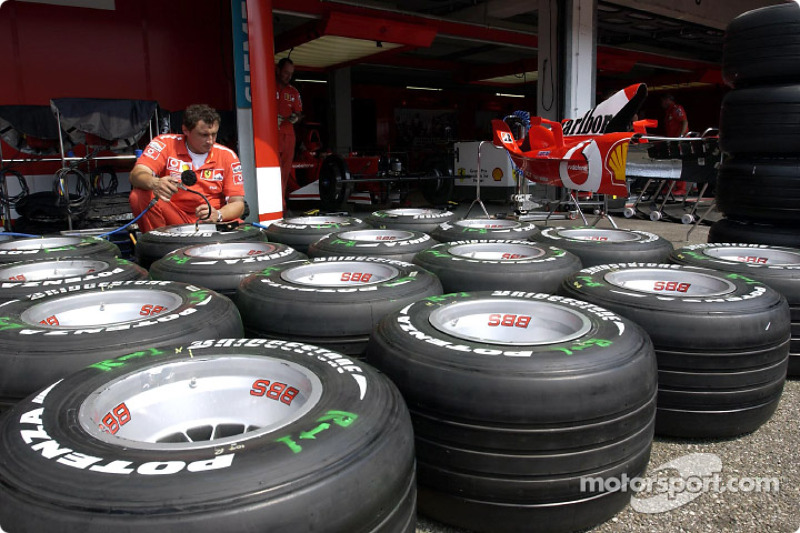 If you talk to senior Bridgestone engineer Kees van de Grint, a Dutch engineer who has come to Formula One through years of karting, it takes a while before he starts to talk about those round black things. His opening remarks are about the ...

If you talk to senior Bridgestone engineer Kees van de Grint, a Dutch engineer who has come to Formula One through years of karting, it takes a while before he starts to talk about those round black things. 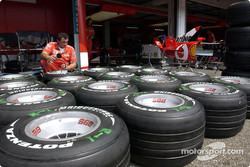 Ferrari team member prepares tires.
Photo by Ferrari Media Center.
Of course, finishing first is not always the case, but even after a bad weekend like Hungary Kees points out that underlying everything is the positive attitude that can bounce the partnership back to the top three weeks later.

"From every bad day we learn a lot to make the next one better. Not just after Hungary but after every race of the season. It might have looked to the outside world that we were in panic mode before Monza with four cars testing on two different circuits, but many of the tyres we tested before Italy were already programmed to test before the Hungarian GP," he pointed out.

While the poor showing in Hungary certainly moved everyone into top gear, the test with some 25 different combinations of new compounds and constructions kept everyone flat out until almost the relative 'calm' of the race itself. In total, there were around 2000 tyres being run the week before Monza, more than 800 of which were used by Ferrari alone. "Some might run a half race distance, others just an installation lap," explains Kees.

The two different types of tyres that the team runs at each race are the result of the intensive testing programs before the races and, of course, what the team has learned over the years about each track when they cannot test on the actual circuit before the race.

"We have a quite a good idea of what's needed before the race, despite the fact that the tyres are constantly evolving from race to race. There are no big leaps forward in this business, but little steps forward race-by-race we hope."

From the initial selection of tyres, test drivers Philippe Massa and Luca Badoer will often make a pre-selection and then Michael Schumacher and Rubens Barrichello will try the same tyres and make their own assessments. They will usually drive 80 or 90 percent of the different tyres available. "They are too keen. They want to know everything," says Kees, who has the difficult job of trying to coordinate the testing with the production of the tyres for the race.

"There is pressure from both sides, from the factory to have decisions and from the team to test as much as they can. By Tuesday the factory is already pushing me to know which tyres they should produce. By Wednesday I can usually narrow it down to four or five choices and by Thursday or even Friday we give them the next race tyre specification."

It's then over to the men which Kees calls the 'unsung heroes' of Bridgestone racing, the men who actually make the tyres at the Bridgestone Racing plant in the suburbs of Tokyo. They will often work 24-Hour shifts and throughout the weekends to get the tyres ready for shipping on Monday. With the exception of emergency deliveries, all the tyres get flown to the UK where they are loaded on trucks and driven to the races within Europe. Outside of Europe they are flown direct to the venue.

"It's always a worrying period. One plane, bad weather or customs problem and the tyres might not arrive for the race," says Kees, who remembers the late arrival of BAR's tyre this year in Brazil. Ferrari alone will have some 80 tyres for the race weekend plus wet tyres. Other teams have the same number, but their choice of tyre is usually different, as they do not get to test everything that Ferrari has.

"None of the other teams are able to test the quantity of tyres that Ferrari can. Between tyre testing they also want to carry out chassis work etc and do not have the time to test all the tyres. Without Ferrari, we would make much slower progress," points out Kees. While the other teams might miss out on a better tyre at one race, they all have the full benefit from the next race onwards. "It's a matter of logistics."

Does it handicap Bridgestone only having one top team like Ferrari while Michelin have both Williams and McLaren to test with? "There are plusses and minuses. Of course, the more you can test with different top teams the more you learn, but on the other hand things go a bit slower as the work load multiplies and input doubles," he points out. "It was a Bridgestone decision to work with one top team even though we do not have comparative data to work with."

As a tyre engineer these days it means knowing a lot more than just about tyres. "It's important to know how a car works. You become part of a group with the engineers, drivers and technicians and have to work closely together and to understand the car to find improvements," he explains.

Last week Ferrari and Bridgestone were working hard in Jerez, Portugal, with more new tyres to test and produce for the upcoming USGP. "They should be arriving in Indianapolis on Thursday," but only when Kees sees those tyre trucks rolling into the paddock will he be able to relax - until the next week's test that is!