Coming in at number eight on our Top Stories countdown is a look back at how Honda transformed its reputation in Formula 1's hybrid engine era in the first year of its partnership with Red Bull Racing.

Honda’s return to the top step of the podium was one of the most extraordinary aspects of the 2019 F1 season, and it fully vindicated what turned out to be a brilliant strategic decision by Red Bull bosses Helmut Marko, Christian Horner and Adrian Newey.

For Honda it was redemption after three painful years with McLaren that were so unfortunately characterised by Fernando Alonso’s infamous “GP2 engine” radio comment.

It’s easy in retrospect to chuckle at McLaren’s (expensive) decision to split with the Japanese manufacturer at the end of 2017. However we shouldn’t forget that Honda did a poor job on performance and reliability over the first few years of its involvement in the hybrid era, and several management changes indicated that all was not well in the camp.

It was perhaps inevitable that Woking’s patience ran out, and the relationship between the two parties became strained beyond salvation. Having said that, it takes two to tango, and McLaren’s own chassis and aero weaknesses were to be exposed when it switched to Renault engines in 2018.

Red Bull, equally frustrated with its long-time partner Renault, saw an opportunity when McLaren jumped. It could use Toro Rosso as a testbed for the engine in 2018, and then switch the main RBR team for 2019 if the signs were positive. There was nothing to lose.

We know now that had McLaren hung on for one more year there would have been enough of an upswing in Honda’s performance to transform the partnership. Instead it was Toro Rosso who reaped the benefit of McLaren’s three years of development pain.  By the middle of 2018 Red Bull was confident enough – based on an extrapolation of Honda’s form at that stage – to commit for ‘19.

At the very first race Max Verstappen qualified on the front row and finished third, and thereafter the Dutchman put in a series of solid finishes as the engine showed good reliability.

Upgrades helped him to score a spectacular win on Red Bull’s home ground in Austria, and further successes followed in Germany and Brazil. There were also three poles, albeit one was lost to a yellow flag offence.

Verstappen eventually beat both the Ferrari drivers to claim third in the championship, and the consensus was that one extra push from Honda for 2020 could give Red Bull a title contending package.

There was still some issues. Both Verstappen and the second entry shared by Pierre Gasly and Alex Albon used five V6s during the year, and the two Toro Rossos – with some strategic changes included – used as many as seven. But then again, Renault users Carlos Sainz and Nico Hulkenberg needed six to get through the season, a reminder of the reliability frustrations that had led Red Bull to jump ship.

Verstappen was often heard complaining about technical problems on team radio, although any frustration never extended to criticism in the media. The relationship between Honda and the two Red Bull teams just seemed to grow stronger as time went by.

“I think it’s been a transitionary year for the team,” said Horner when asked by Motorsport.com. “It was always going to be – the first engine change we’ve had in 13 years.

“And the partnership with Honda has worked tremendously well, from the first race, the podium in Melbourne. You know, with each engine has been introduced, we're getting better and better.

“Reliability has been been strong. We've only had one mechanical DNF this year, in Azerbaijan [with Gasly], and with each engine introduction, we’ve got closer and closer to the pace.

“The three pole positions, albeit we only kept two of them, three victories. Nine podiums is a really impressive performance this year.

“This is really has been beyond expectation and in many respects, the relationship with Honda has been fantastic, the reliability, the performance increased with each engine. It’s been very much a highlight.” 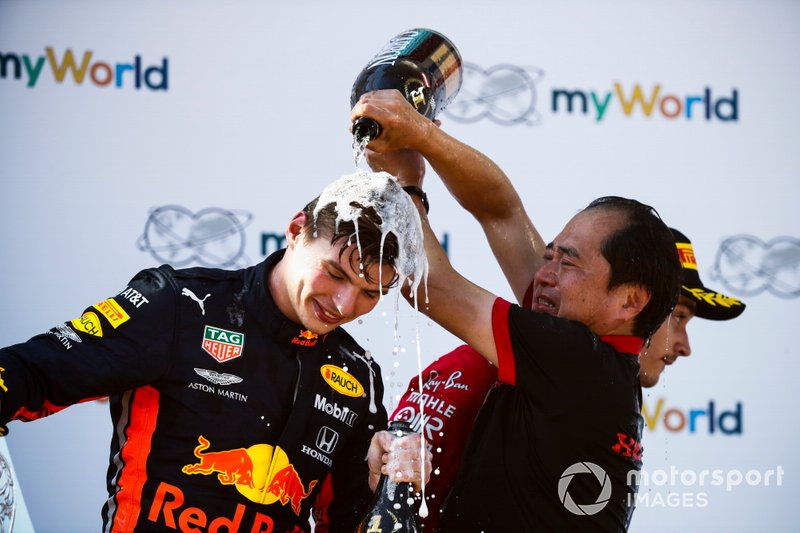