Top Stories of 2015; #1: Cockpit safety in the spotlight after losing Wilson and Bianchi 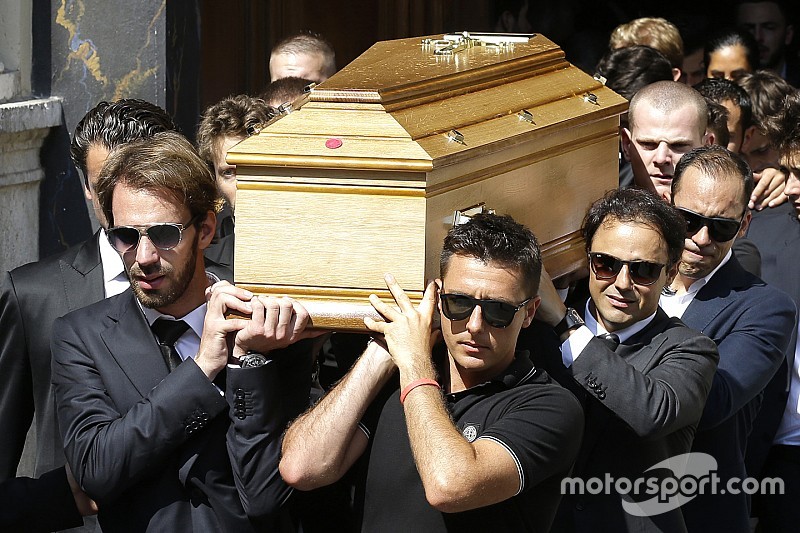 Topping our list of biggest stories in 2015 are two very somber headlines. The loss of both Justin Wilson and Jules Bianchi.

July 17th, 2015 -- Nine months after that horrifying crash in wet conditions during the 2014 Japanese Grand Prix, Jules Bianchi, 25, succumbed to his injuries.

He was the first driver to die as a result of injuries sustained in a Formula 1 GP since Ayrton Senna over two decades ago.

His death came after months of sparse, but similar updates. All essentially read the same way: "Neurological status remains unchanged."

The family waited for a miracle and mere days before Bianchi passed, his father Philippe released this heartbreaking statement:  "It's unbearable, it's a daily torture. We sometimes feel like we're going crazy, because for me, it certainly is more terrible than if he had died."

People wanted answers; they wanted to make sure this never happens again. The discussions regarding cockpit protection were sparked a month earlier after an incident between Fernando Alonso and Kimi Raikkonen at the start of the Austrian GP. The McLaren climbed over the front of the Ferrari, narrowly avoiding Raikkonen.

With the death of Bianchi, those discussions intensified. Just four weeks after Bianchi's tragic passing, tragedy rocked the racing world once again. During the penultimate round of the 2015 IndyCar season, race-leader Sage Karam crashed. Debris from his mangled machine was thrown all over the track and a section of the nose cone found its way into the cockpit of Justin Wilson's car.

The highly respected racer, beloved husband and father of two young daughters died as a result of head injuries sustained in the accident.

"On behalf of the Wilson family, it's with profound sadness that we announce Justin Wilson died this evening at Lehigh Valley Health Network Hospital as a result of the head injury he sustained at the Pocono event," Mark Miles, CEO of Hulman & Co. said in a press conference.

"He passed away in the company of his family. Brother Stefan, his loving, wonderful wife Julia and his parents Keith and Lynne. Justin's ability to drive a race car was matched by his unwavering kindness, character and humility which made him one of the most respected members of the paddock.

"As we know, the racing industry is one big family. Our focus now is on rallying around Justin's family during this difficult time. Anyone who follows our sport knows that Justin is one of the most well-respected and highly-regarded people in the entire paddock. He will be missed."

As the motorsports community mourned the loss of Wilson, the closed cockpit debate hit a fever pitch. The FIA took the lead on the matter and plans to tests three new concepts – a small forward roll-hoop, the Mercedes-inspired 'halo' concept, and a new centerline roll-hoop idea featuring three long strips of material.

In the below video, Motorsport.com's technical editor Giorgio Piola shows how that new centerline concept could work – and how it compares to the halo idea that was been widely discussed before.

Meanwhile in the States, IndyCar announced their own changes for 2016, in the name in the safety. Among the updates are Zylon tethers that will be added to key aerodynamic components including the rear wing and wheel guards. For superspeedways only, the nose section will also be tethered.

And in an effort to prevent the cars from getting airborne after several high-flying incidents in 2015, the series is introducing domed skid plates on the underside of the chassis and rear wing flaps that deploy at 90 degrees if a car spins and travels backwards, mimicking the roof flaps that have been utilized and proved effective in NASCAR for some time.

Hopefully, these innovations help prevent future tragedies from occurring, but as we've been so cruelly reminded so many times before, auto racing will never be completely safe.

#7: Cars fly, Hinchcliffe cheats death in Month of May chaos

#10 No winners in Kenseth/Logano Chase war

Was this the best racing driver excuse of 2015?