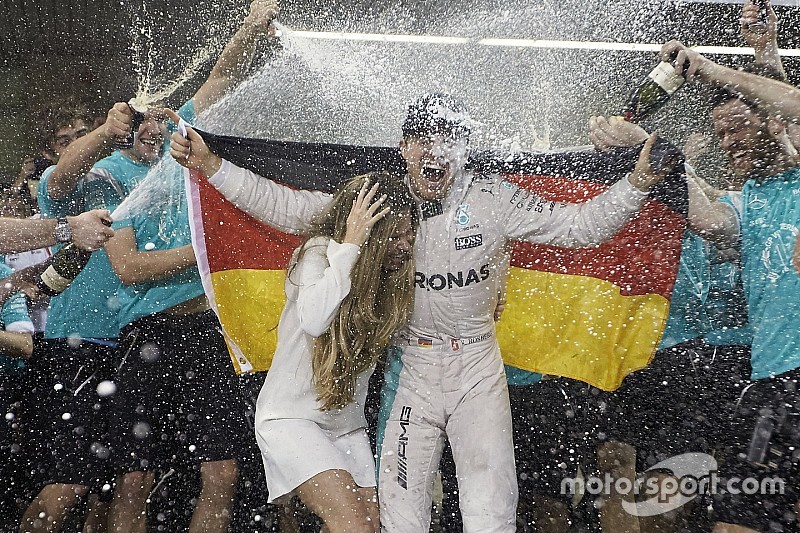 For anyone who's followed Formula 1 this year, it will come as no shock to see that we've selected the story of Nico Rosberg retiring immediately after securing the title as our biggest in motor racing of the year.

When Rosberg stood up at a press conference a few hours before collecting his world championship trophy at the FIA Gala Awards in Vienna to say he was calling time on his F1 career, many in the room thought he was joking.

After his best-ever season, a thrilling title climax in Abu Dhabi and having turned the tables on Lewis Hamilton, all expectations were on him becoming even better in 2017 now the pressure of winning that first title was off.

Even his father Keke Rosberg had predicted his son to become stronger off the back of his success, after joining the post Abu Dhabi celebrations

“A happy man performs always better than an unhappy man,” said the 1982 champion. “I think he will raise the game a little bit next year like everybody does. Jenson [Button] did it when he won the championship, I did it. That will probably happen. It goes with the game.”

But as Nico woke up with a hazy head the Monday after the race – having got to bed long after dawn – his mind was already pretty much made up.

Having achieved his dream of a title, having dug so deep to withstand the pressure of Hamilton’s on-track assault and off-track mind games, and having realised that fortune had perhaps stepped in a little to help him get that crown, he was not willing to come back for more.

He spent Monday flying to Malaysia with Mercedes motorsport boss Toto Wolff, with the pair star guests at a press conference for the team’s title sponsor Petronas on Tuesday. They flew back to Frankfurt, via Singapore, that night - arriving in Germany on Wednesday morning.

During that flight the pair talked at length about the season, the pressures of the campaign, and a lot about mind management.

But while Rosberg’s own mind was made up about not carrying on in 2017, he confessed he did not have the courage to tell Wolff face-to-face that he would not be racing on for Mercedes.

They duly parted ways at Frankfurt airport – with Wolff due to catch a plane to Stuttgart. Just three minutes later, Rosberg – welling up with emotion – called his boss on the phone and dropped the bombshell.

The dream had been achieved. The pressures to do it again were too much. He was off.

Rosberg had admitted in the hours after the Abu Dhabi race that the stress of gunning for a world title against a fired-up Hamilton had begun to bottle up inside him.

And, well aware of what was happening – and how in those final races the world title was his to lose – it began to get to him.

“For sure it’s been my best season and I’ve done my best ever races this year definitely,” said Rosberg. “The last couple of races, especially the last one, that’s not the real Nico. The pressure slows you down. For sure that’s difficult."

As an intelligent man, Rosberg knew how much he had to give to deliver this crown and, with a young kid at home, how much of his life he was sacrificing to do it. And the need to throw everything at F1 – and behave in a way that he didn’t feel natural  – perhaps made him feel he was becoming someone he didn’t like himself.

The mental baggage that comes with the job, to deliver week in, week out, was something that he had felt ever since he stepped in to F1, as his former teammate Mark Webber revealed.

“I remember him coming into the motorhome, we're sat in the motorhome together in Budapest in his first season [in 2006], and he just said the [summer] break that year, his first year in F1, couldn't come early enough because he was actually mentally just like 'this is so f*****g hard, so difficult to pull everything together' and really feeling the heat,” Webber told Motorsport.com.

“Formula 1 was very hard for him, I think, even though he was driving well, but he was like 'pff, this is tough'. And I think that the way he'd had those Williams tough years, it was great grounding for him.

"There's obviously a lot of doubts, when you're a grand prix driver and you're in sub-par machinery, like he had been for a while there, you know... you think what can you do when you get the machinery?”

Despite Webber and Rosberg having their clashes, the Australian has nothing but praise now for the way that his former teammate grew and came through the challenge of both Hamilton and Michael Schumacher.

“I think the quality of him having to deal with Michael, obviously on the comeback, he was obviously in the shadows in terms of profile. He did a very good job against Michael, who obviously was off the back of his best, but still... Nico hung in there with that campaign, the car then came together and then who turns up? Hamilton. So it was really, really tricky.

“I cannot give him any more admiration for that in terms of what he's had to get to that point, with some strong boys coming his way. Yes, in the absolute peak of his career, age-wise and all that - which is great - so he had no choice but to deliver and hang in there.

“And I think the last two years in particular, you can't really fault how he's handled it. Yeah, they've had lovers' tiffs on track, that happens, that always happens, teammates get on when they're fighting for podiums, which Max [Verstappen] and Daniel [Ricciardo] are at the moment.

"But when there's wins on the table, no one else is in the game, it gets personal - and that's totally normal.”

He added: “Nico had patches mentally in the [Abu Dhabi] race where he felt pressure that he never felt in his career before, and I went through that before. You can't read a manual to help, you can't ask other people - well you can a little bit, you've got counsel from some other people who've been through it all, but it's very hard.

“That situation, it’s very unique and dynamically changing quite quickly in terms of qualifying and the whole thing... so for him to mentally get his head into gear for basically every scenario, which was thrown at him again in the race, it’s abnormal, it’s uncharted waters.”

So uncharted, that Rosberg won’t be going there again. He walks away from F1 a happy man with zero regrets.

The Big Interview: Giorgio Piola on his F1 career

Valentino Rossi and Ferrari in F1: What might have been?