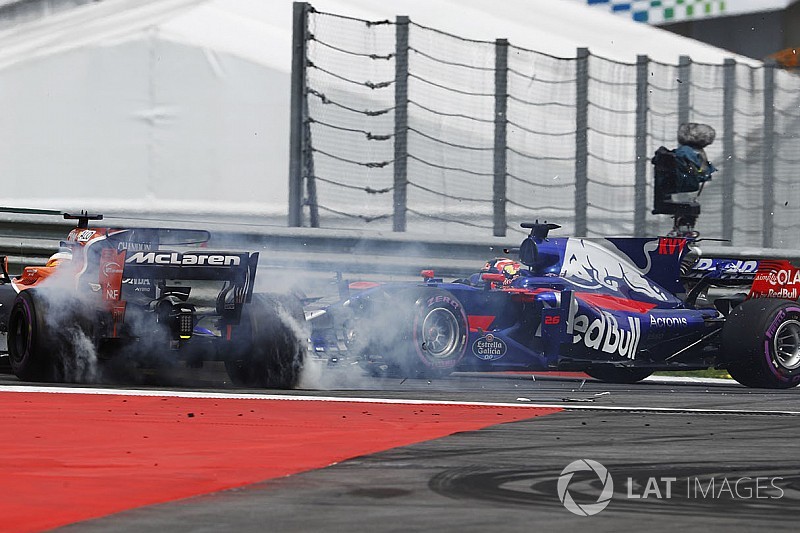 In at number 16 in our countdown of the biggest stories in racing in 2017 is Toro Rosso's mid-season driver line-up reshuffle, one that cost Daniil Kvyat his place in Formula 1.

At different points in the season, various Red Bull officials would openly express a preference for keeping the Toro Rosso line-up unchanged for next year.

That made it all the more surprising – and quintessentially 'Formula 1' – when both Carlos Sainz and Daniil Kvyat instead departed the Italian team midway through 2017.

They had made for a handy midfield line-up – two drivers of similar experience and arguably similar potential – but it was obvious their respective stock was trending in opposite ways, and this created an issue.

Having more or less dominated his teammate since they were reunited at STR in 2016, Sainz made it as clear as could be that he had little interest in remaining at the Italian team for a fourth straight year.

That declaration, made during a press conference at Red Bull's home race no less, yielded a barrage of criticism from the parent company and subsequently a fair bit of backpedaling.

Nevertheless, the wheels were set in motion. Red Bull's initial stance of “not for sale” soon made way for “for sale, but only for the right price”, and Renault's interest had been clear for some time.

And so two plus two made four, although instead of a simple football-style transfer, Sainz's Renault arrival – announced first as a 2018 loan and then as a mid-season switch for the US GP – was part of a multi-faceted agreement involving also the long-suffering McLaren-Honda partnership.

Of course, by the time Sainz donned his new yellow overalls, his long-standing teammate Kvyat was too on his way out of Toro Rosso – albeit for altogether different reasons.

Once one of F1's hottest prospects, the Russian had struggled badly since his demotion from the main Red Bull team last year, and 2017 offered little respite.

Publicly, the team stood by him. Sainz's overtures to an STR exit had yielded a much fiercer reaction than the costly crashes triggered by Kvyat in Austria and Britain. Yet those incidents added further cracks to an already thin ice, and the Russian fell through for good in Singapore.

Enter Pierre Gasly and Brendon Hartley. The former had won the GP2 title in 2016, but not comfortably enough to convince Red Bull he was worth dropping Kvyat for.

He was shipped off to Super Formula and took a while to get to grips with it, but was soon in a very well-timed rich run of form and finally got his break.

Gasly's promotion was a no-brainer. Hartley's arrival, on the other hand, was anything but, given that he was already once dropped by Red Bull and was nowhere near the F1 radar, instead finding considerable success in endurance racing.

But with Porsche's LMP1 programme ending, the Kiwi threw his hat in the proverbial STR ring. And circumstances conspired to grant him a US GP audition – against a recalled Kvyat, no less, with Sainz off to Renault and Gasly needing to attend the Super Formula title showdown that ultimately proved pointless.

At Austin, Kvyat scored what would turn out the final point of the season. As Hartley impressed, especially in race trim, a solid enough performance from the Russian was not enough to keep him off the sidelines for the rest of 2017.

Toro Rosso would also score no points for the rest of the year, and give up sixth place in constructors' standings to none other than Renault as a result.

Whether line-up stability would've prevented this or not is up for debate, as it's hard to say how much better Sainz and Kvyat would've fared in a now-unwieldy STR12 and with engine penalties skyrocketing.

But if the shuffling did hurt the bottom line, Toro Rosso will be hoping that the losses can be offset by the earlier integration of Hartley and Gasly helping them to a quicker start next year.

Of course, new engine partner Honda will have to make significant gains for that to make a difference in the pecking order. But Toro Rosso's new duo will have certainly appreciated the added experience.

What they probably won't appreciate, though, is that 2017 has served up another example of Red Bull's risk-taking, stability-eschewing approach to picking its F1 line-up.

Tech gallery: How the McLaren MCL32 evolved throughout 2017

Vandoorne grilled by fans on McLaren, Senna and Bathurst