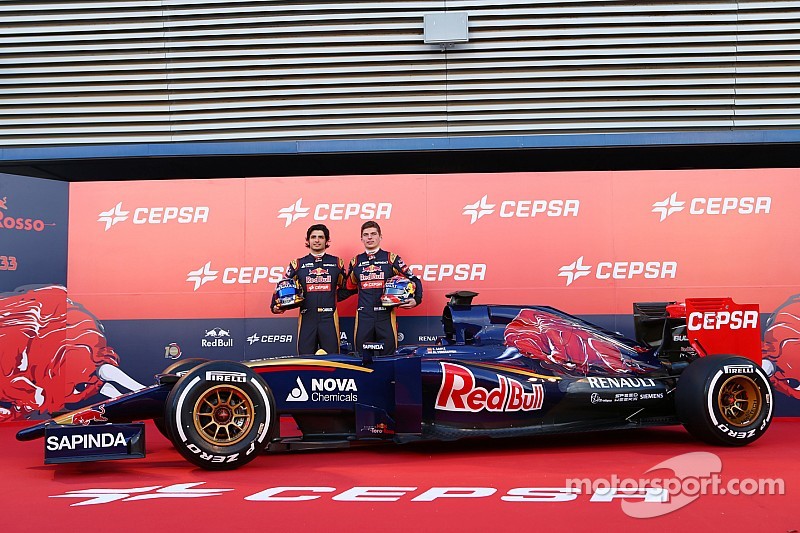 Wraps come off STR10 as Sainz and Verstappen gear up for their Formula One debuts.

Toro Rosso has launched its 2015 Formula One World Championship machine, the Renault-powered STR10, to be driven by its exciting all-rookie driver line up of Carlos Sainz Jr and Max Verstappen.

The car features a new, 'pointy' nose and a large airbox, which has a split air intake. It has also mounted its TV cameras on the nose, as per the 2014 Mercedes.

It marks a decade since Red Bull took over the Minardi team for its second-string outfit to develop young drivers. And this season’s line up is perhaps its most exciting for years.

This year is a watershed for the Italian-based team, as both Daniil Kvyat (promoted to Red Bull) and Jean-Eric Vergne (overlooked by RBR and rejected to simulator duties at Ferrari and Formula E with Andretti Autosport) exit stage left. From the wings, Formula Renault 3.5 champion Sainz and precocious teenaged protégé Verstappen take centre stage.

Verstappen is an old head on young shoulders off the track as well as on, and has played down expectations ahead of the season.

"If I managed to finish in positions 8 through 10, it would mean that I am coping well with the task,” he said. “But in order to rise above sixth place would need luck

"Of course, you might get lucky in the rain or in the event of many drivers retiring, but I do not expect us to fight with Red Bull, Mercedes, Ferrari, McLaren and Williams. The budgets of those teams are much higher than ours, even if the numbers from the wind tunnel show that our car will be good.”

Despite his youth, Verstappen has the edge over Sainz after running three Friday free practice sessions with STR at the tail end of last year.

"In this sense I may be a little disadvantaged so I will need to work hard,” admitted Sainz. “He has done more miles than me, and already has a team of engineers, while my advantage is that I have been competing for more years than him.

"He is very good, but I'll be ready for the first race and will try to beat him."

The irony of the new superlicence rules

Although they both possess famous fathers (Carlos Sainz Sr is a two-time world rally champion; Jos Verstappen contested 106 grands prix), it will be Verstappen who earns the most column inches. Just as a technical development becomes truly infamous when it gets banned, 17-year-old Verstappen’s arrival has coincided with the FIA rewriting its superlicence eligibility rules amid talk of the cars being too easy to drive.

The irony with this is that Sainz, too, would also not be considered suitable for an automatic superlicence when the system is employed next year, although that is mainly thanks to the FIA’s rather tough stance on Renault’s flagship series as opposed to his experience level.

Max Verstappen: I can finish in points in Melbourne