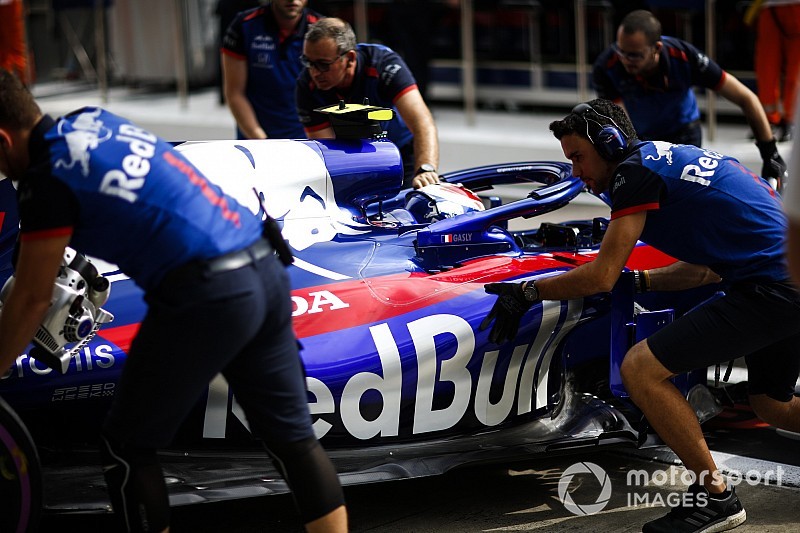 Toro Rosso has reverted to the previous specification of the Honda Formula 1 engine despite a positive response to the upgrade in Russian Grand Prix practice.

The Japanese manufacturer introduced the update at the Sochi event to prepare the new engine ahead of Honda’s home grand prix next week.

It was lauded by Toro Rosso after Friday practice but it was then decided to go back to the old spec.

This is because Honda believes there is more calibration work to do and the engine can be better matched to the chassis.

The manufacturer insists the change is not for reliability reasons.

"Having studied all available PU data after FP2, we realized that, although the performance was encouraging, there is still some work to do in some areas such as calibration and matching the PU to the chassis," Honda F1 tech chief Toyoharu Tanabe said.

"We have decided to revert to the older specification PU on both cars for the rest of the weekend.

"We believe we can complete the work before the Japanese GP, so that we can run the new specification PUs on both cars from then on."

An engine component can be changed more than once in the same grand prix weekend, but if that happens then only the most recent part fitted is added to the driver’s pool of available components.

Crucially, as Honda can re-use older combustion engines for both drivers, the new engine introduced on Friday is added to Honda’s pool of available power units.

This means it can work on the upgraded combustion engine as required and then use it in Japan next week without triggering fresh grid penalties.

Gasly has changed to a complete set of older parts, so next week he will switch back to all-new components that were used in Russia on Friday.

Toro Rosso has opted to introduce a new turbocharger and MGU-H on Hartley’s car though.

This has been done in the interest of saving time, because it is easier for Honda to marry new versions of those components to an older spec combustion engine and make a complete engine change than it would be to only change some components.

Hartley’s turbo and MGU-H will therefore be fresher than Gasly’s here in Russia and also to the spec designed to match with the upgraded combustion engine.

However, this is not expected to cause a major performance variation between the two cars, and he will need to use these new turbo and ERS components next weekend in Japan.

The two drivers matched their FP2 laptimes in FP3 with the older-spec engine, but the session was at least a couple of tenths faster for the majority of their rivals.

Both drivers will still need to serve the grid penalties their initial engine changes triggered this weekend.