Has the Eifel GP made two-day F1 weekends inevitable?

Amid chatter about potential race weekend format changes in Formula 1, last weekend’s Eifel Grand Prix at the Nurburgring offered an accidental look at what the future could be. 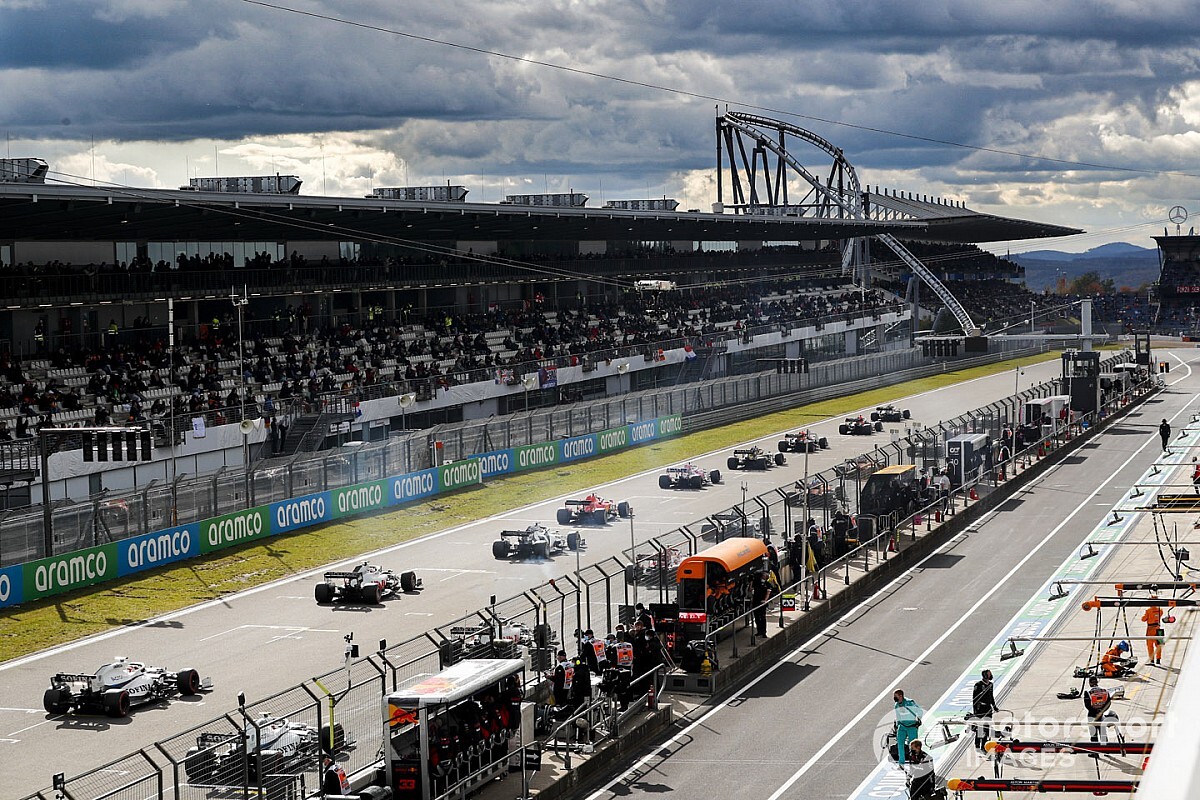 The weather conditions promised by the Eifel region - known as “German Siberia” - arrived on Friday as rain and heavy fog hit the Nurburgring.

Conditions were so poor that the medical helicopter was unable to take off, forcing both FP1 and FP2 to be cancelled and resulting in a long day for drivers waiting around.

Improved conditions and a new action plan from the FIA ensured that FP3 went ahead as planned, leaving drivers with one hour in which to get up to speed at a track where F1 had not raced since 2013, essentially condensing the race weekend into two days.

A two-day weekend format had already been given the go-ahead for the Emilia Romagna Grand Prix at Imola later this month, acting as a first official step to what could become F1’s norm. Drivers will have a single 90-minute practice session to get up to speed at Imola on Saturday morning ahead of qualifying, followed by the race as normal on Sunday.

The format change initially split opinion through the F1 paddock. Red Bull’s Max Verstappen said in August that it was “a bit stupid” having a single practice session for what was essentially a new track for F1, and questioned why the format hadn’t been done at tracks hosting multiple races, such as the Red Bull Ring and Silverstone.

But with more and more figures in F1 coming around to the idea, are two-day weekends now inevitable?

Having just a single practice session at the Nurburgring did little to change the status quo at the front of the grid. In qualifying, Mercedes was still able to lock out the front row ahead of Verstappen in third.

Yet the lack of opportunity to analyse all of the data typically picked up from three hours of running on Friday prior to Saturday meant they lacked the usual ‘perfection’ typically displayed in qualifying.

“No doubt, the more practice you have, you get all the fine details right,” said polesitter Bottas.

“Especially Friday, you have the whole night between the sessions to look at things and learn about things from the car and driver.  So I think with more practice, we’d have been a tiny bit quicker.

“But honestly I think currently in a normal weekend, I feel like there’s too much practice.

“Everyone finds their ways and set-ups and the optimal things in terms of driving and the car set-up, but if there would be a bit less practice, maybe some teams can get it right, some drivers can get it right and some don’t.”

That kind of unpredictability and added jeopardy for drivers is something most will see as a bonus to add in. One driver who was left ruing the limited running in Germany was Alex Albon, who qualified fifth, losing out to the slower Ferrari of Charles Leclerc in Q3.

“I wasn’t as happy as I would have been on my laps as if I did FP1 and FP2,” Albon acknowledged, but explained how those moving up from junior categories recently would have been used to the lack of running.

“If you think about it, especially for the F2 and F3 drivers, this is more or less what we’re used to,” Albon explained. “It’s not anything too different. It just means you’ve got to be on it a bit quicker in the session, and you can’t really take your time.

“It felt good, and I quite like it. I’m looking forward to Imola if it’s the same thing.”

Race winner Lewis Hamilton said the lack of practice running made his run to victory “more challenging”, but said he was “quite happy not to do a Friday”, highlighting the environmental benefit.

“There’s 22 days less of 20 cars bombing around the track and polluting the air, the planet, so that’s a positive,” Hamilton said.

“I think it just made it so much harder for us. Normally you have two sessions on the Friday, you get time to make tons of different set-up changes, and if you’re on the back foot, you’ve got time to catch up.

“When you start on a Saturday, you’ve got no time. You’ve got that one session to really get on top of it and the set-up between practice and qualifying. It made it so hard.”

Haas driver Kevin Magnussen felt it would also remove some of the advantages of the bigger teams who have the resources to pour over all the data gained on a Friday.

“The top teams will probably have the car closer to the optimum than the smaller teams are likely to have,” Magnussen said. “But then as a driver, I think you can make a difference. If you're good at adapting, then that could give you an advantage.

“All sorts of analysis arrives on Saturday morning or sometimes Friday evening [for big teams]. You just get the info that we will get as well, but we will get it next week.”

As F1 pushes to try and reduce the vast performance gaps between teams through the budget cap and revised regulations moving forward, cutting to two-day weekends could be an effective way to help this without touching the rulebook.

Mercedes F1 boss Toto Wolff echoed Magnussen’s belief it could help level the playing field more, rewarding “the most adaptable and innovative team”, and gave his support on a sporting level.

“Obviously it's a question that needs to be asked to the promoters,” Wolff said, noting the possible downside of no Friday running.

“They are selling tickets on the Friday, and many people are not able to afford the weekend tickets and they can still see the Formula 1 cars on the Friday. That is something that needs to be considered when developing that idea.”

A cutback to two-day weekends would ultimately result in changes to the existing agreements between circuits and F1 in hosting events, as the fee for three days of action and ticket sales would have to be slashed for two days.

Compensating for this could be the possible expansion of the calendar, which is something F1 has craved since its takeover by Liberty Media in 2017. The figure of 25 races has been quoted extensively in the past, and strikes fear in much of the F1 paddock for the lengths it will stretch people to. The revised 2020 schedule has been particularly brutal, containing a run of nine races in 11 weeks to start the season, and was accepted as a one-off due to its necessity, not as a blueprint for the future.

Yet if F1 were to see two-day race weekends as a credible and workable way forward, there would be reduced burdens on the paddock. Although it could not be taken to extremes, given each race week still involves travel and set-up days all are involved in, it could make a schedule of 25 races more workable. More races would result in more hosting fee revenue, in a normal year, making up some of the gap losing Fridays may create.

“It could open up an opportunity,” said Renault’s Daniel Ricciardo. “Either more races, or just more time for us to prepare away from the track with training or other commitments we have.

“Some weekends do feel a bit dragged out with that, so yeah two days weekend can still be cool. But maybe the cool places like Austin, let's have five day weekends!”

If Imola’s format was seen as a trial for F1 moving forward, then by accident, it will end up with double the feedback and data to go on thanks to the foggy Friday at the Nurburgring.

For once, poor weather causing sessions to be scrapped may end up working in F1’s favour, helping define what its future could look like.

Book your tickets to the Emilia Romagna Grand Prix with Motorsport Tickets now to witness the race for yourself.