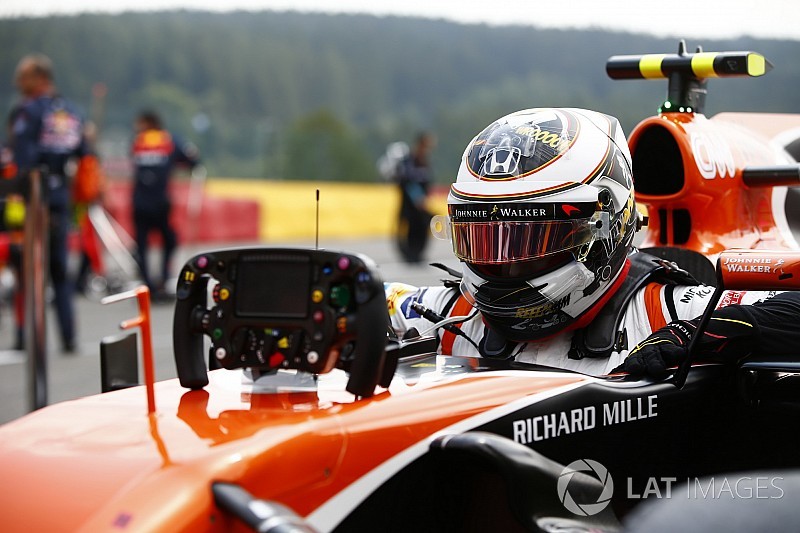 In his latest column, Stoffel Vandoorne looks back at his Belgian Grand Prix debut, which was severely compromised by a raft of engine penalties.

Coming back to Formula 1 after the summer break and going to my home race at Spa-Francorchamps was always going to be special for me.

To drive in front of my home fans, my family and my friends gave me some extra motivation, a little bit of a boost, you might say.

It had also just been confirmed by McLaren in public that I would be staying on with the team for 2018. In a way it wasn’t big news to me because I have a multiple-year deal anyway, but it was important to get the message out there and put the issue to one side.

Now we can concentrate on the second half of the season and really prepare for the future – knowing the team is 100 percent convinced in my capabilities.

Unfortunately, the Spa weekend did not start off with more good news, because early on I learned about the engine penalties I would be getting for using the upgraded Honda power unit.

Knowing I would start from the back of the grid meant that we changed our approach to the whole weekend - focusing much more on long runs with high fuel and not really preparing for qualifying because we knew it was not important for us.

We had a reasonable Friday with good fine-tuning of the car, and we seemed quite competitive on the long runs. So for us it was a reasonable first day of practice considering the track layout, which has so many straights.

Then there was a blow on Friday night when the team discovered some issues with my new power unit as they were doing some checks. As a precautionary measure, we had to change the engine again for Saturday.

For the team, it was an incredibly long night. They discovered this problem very late, around midnight, so they had to break the curfew and start changing the engine then.

It meant the mechanics had to stay working until almost 3am, then had very little sleep before coming back into the paddock very early on Saturday morning. It was tough for them all, but they did a good job because everything worked fine on Saturday. I truly wish to thank all of them!

We had quite a good FP3 focusing on the long runs and going into qualifying we agreed to have a bit of a special strategy to try to help the team – which meant giving Fernando Alonso a good slipstream and sacrificing my qualifying runs.

For me, qualifying was not important because I was going to start last anyway, so we decided that working with Fernando would be best for the team.

It did mean, however, that the only way I could show my potential was in Q1 when I had a very good run – setting the 10th-best time on my second push lap on ultrasofts. But as soon as both cars got into Q2, I knew I would have to focus on helping my teammate.

I had talked a lot with Fernando and the engineers about how best to make this work, and we had some good practice before qualifying. And I think in the end it worked perfectly – although he was unable to make it through to Q3.

On Sunday, I think my race was one of the better ones I have done this year. It was very strong in terms of the job I did, but it was also very frustrating starting so far back, because there was no real hope of being able to overtake some of the guys in front of us.

We were really lacking top speed, but the chassis was very competitive in the middle sector where the corners were.

I think this weekend’s Italian GP will be a difficult one too, and probably one of the toughest races of the year for us.

If we see how the situation was in Spa, then Monza is even more straight-line with fewer corners to gain lap time back. I expect a very hard weekend, although at the moment the weather looks a bit mixed - so that could be good for us. I will do my best as always and will be ready to get any opportunity.

Bottas: Too early for team orders at Mercedes