Verstappen: I'd prefer engines to blow up than shut down 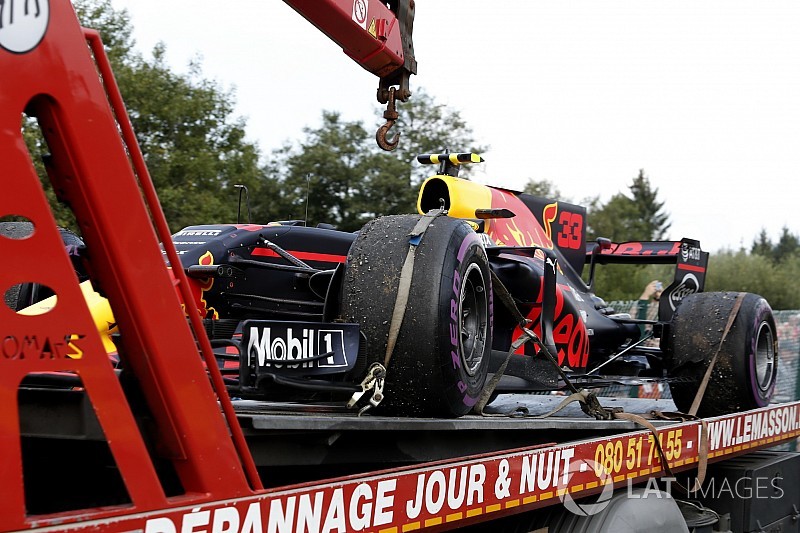 Max Verstappen says he would rather his engines were blowing up than shutting down, after revealing his failed Renault fired up in the garage after the Belgian Grand Prix.

Verstappen was forced out of the race at Spa when a sensor shut down the power unit after detecting increasing pressure inside the fourth cylinder.

And the Dutchman has revealed that his frustrations about the situation increased after the grand prix when his car fired up in the garage.

“Because we blew up a few engines at the beginning of the season, they have built a kind of safety mode,” said Verstappen.

“But at that moment, when the engine goes into that, it doesn’t run any more. So when the car came back, they removed the plug, put it back again and the engine worked.

“They want to play safe and not to blow the engine, but I prefer that [blowing the engine] than it shuts down the engine and it runs again at the next restart.”

With six retirements this season, Verstappen has made it clear that he finds the situation at Red Bull increasingly frustrating.

He says he has let the company’s motorsport advisor Helmut Marko know how annoyed he is.

“I’ve spoken with Helmut again today and told him that I’m not happy,” he said. “The fun fades away.

"You go on holiday, charge yourself after a kind of terrible [first part of the] season and then you arrive at Spa and it goes wrong.”

He added: “You sign a deal with Red Bull and you want a winning package. We don’t have that at the moment. I’ve let them know I’m not happy, just like after the previous DNF, but it’s only getting worse, of course.

"I know it isn’t coming from Red Bull, but in the end it’s the entire package you are depending on.”

Pushed on whether the situation was now so bad he was contemplating tearing up his contract, Verstappen said: “No, that’s not possible. The problem with F1 is that the differences are too big. We can’t do much at the moment.

“If you would win everywhere, it’s fine to go from Toro Rosso to Red Bull. Everything improves, but in the end you are behind and there isn’t much progress within the year. That’s not nice.”

Asked what happens next, he said: “We’ll see, at the end of the contract.”