Verstappen called off race charge to save engine 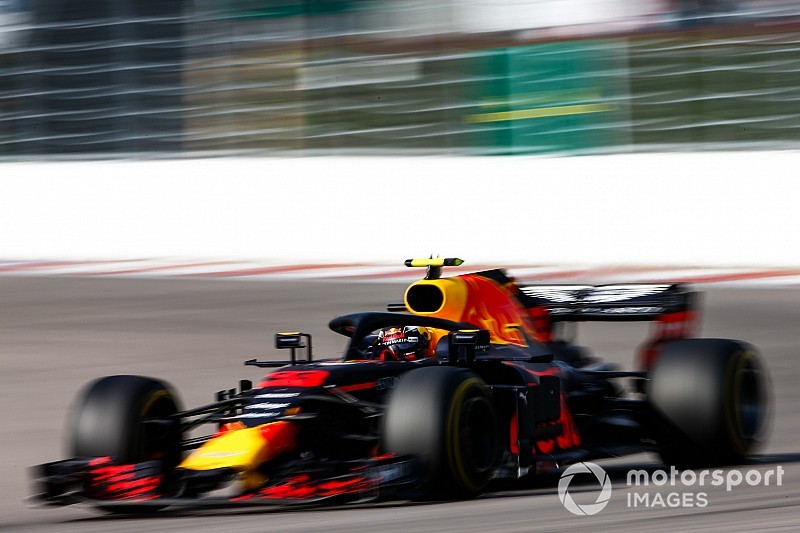 Max Verstappen abandoned thoughts of a late-race surge on new tyres in the Russian Grand Prix so he could save his engine for the rest of the season.

The Dutchman pulled off a brilliant charge from the back of the grid to lead much of the race at Sochi, as he ran an extended stint on soft tyres.

Having left his switch to ultrasofts until just 12 laps from the end, a series of quick laps would have been enough to put him on to the tail of the Ferrari cars ahead of him.

But his Red Bull boss Christian Horner revealed after the race that the decision was made for Verstappen to hold his position in fifth – and play the long-game in not over-stressing his power unit.

"It was a shame he had to make the stop really, but of course it is mandatory," Horner told Sky about Verstappen's opening stint.

"The other compounds were very fragile, so we stopped as late as we could, but we could see already they were starting to chunk up a little bit.

"At that point you are too far behind Kimi to have a go at him, so it was a question of we took the penalty of the engines here, let's save these now for the races coming up."

Horner said that Verstappen's "awesome" climb up the field in the opening stages had shown that Red Bull had had a car in Russia that could have taken the fight to Mercedes and Ferrari if they had not started from the back.

"I think we had a really competitive race car this weekend," he said. "I think we would have been in the mix, and of course early on in the race they all start pacing themselves.

"We had a car that was very good on its tyres today. There was no sign of any blistering on the soft tyres for us today and it would have been nice to start in normal grid positions.

"But we have salvaged a good result out of this, and we've got a couple of engines up our sleeves for the final five races."

He added: "We were more competitive here than we thought we would be. I think we could have taken Ferrari on yesterday."