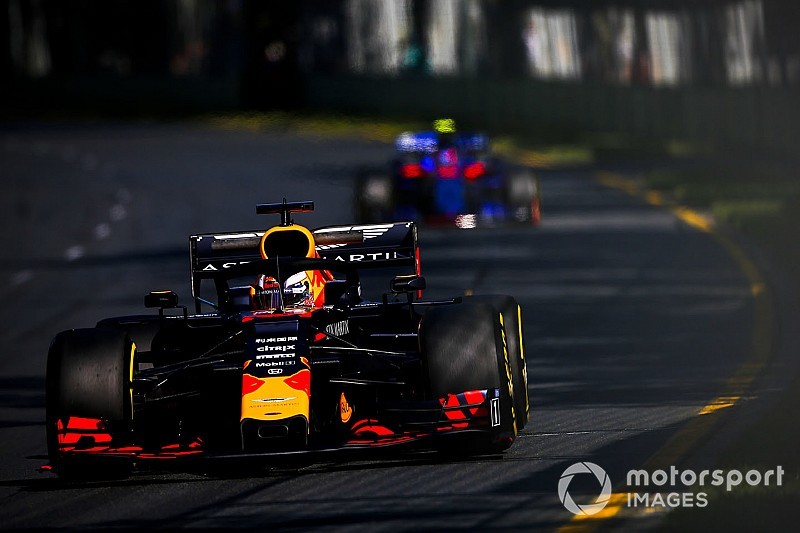 Max Verstappen thinks Formula 1 should move away from relying on DRS for overtaking moves, with Lewis Hamilton labelling the concept a "band aid" for poor racing.

While the jury is out on the effectiveness of new front wing regulations to allow cars to follow each more closely, drivers have no doubts that the bigger DRS in 2019 has boosted its effectiveness in battle this year.

But Verstappen thinks that while it is good drivers can fight, he reckons ultimately Formula 1 needs to find solutions that allow more traditional overtaking moves.

"With the DRS, that was the big positive," said Verstappen about his views on the new rules to help racing. "They did that well.

"But of course in a way maybe you don't want the DRS overtakes.

"I would be a fan of trying to go away from DRS overtaking. But at the moment that is a good solution, I guess, on some tracks where you normally can't really get by."

Verstappen's views have been backed by Lewis Hamilton, who says that DRS is a sticking plaster for the lack of overtaking opportunities that modern F1 allows.

"Obviously DRS is a band-aid for the poor quality of the racing that we get with the cars that are designed," said the world champion. "But it is what it is.

"You can't change the fundamental structure of how these cars are and the wake that they create, so they've got to find a way of making racing easier."

Speaking about how well the new regulations have worked, Verstappen added: "Well following is still difficult.

"But for me, the main problem was - in my first stint for example, I felt I was quicker than Sebastian [Vettel] but I couldn't run close because my tyres were overheating. I had to back out. And then of course with the turbulence you get from the cars it's not ideal."

Both Verstappen and Hamilton are clear that the improved DRS, plus an extra zone in Bahrain, could lead to much more overtaking this year.

Verstappen said: "Here anyway you can overtake more, so you will definitely see a lot more overtaking going on.

"Also I think even if people go by with the DRS, because it's such a big slot, even when the guys then go behind again, I think the turbulence of the car means you can have a fight again. It will be interesting.

Hamilton added: "I think it's going to make it more exciting. You'll have to be more tactical. Here there's always such a big delta time that you have to have to the car in front to have a chance of overtaking. Increasing the DRS reduces that per lap, which I think is a positive thing."

Verstappen has suggested that if DRS overtaking opportunities become too easy then the FIA should shorten the zones.

"You can always then make it shorter, the zones," he said. "Yeah, just shorten the zone - I think over the years we've made it longer, maybe now you can make it shorter."