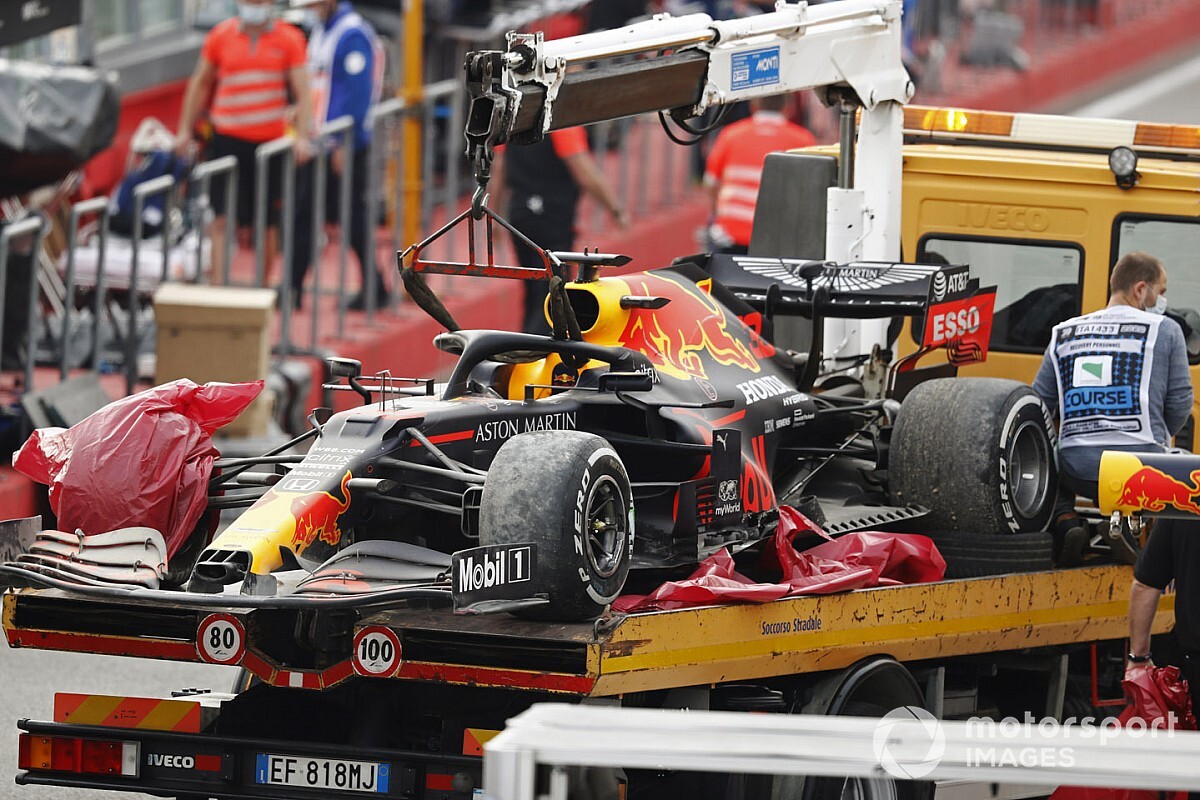 Verstappen was comfortably running in second place before a blowout on his right-rear tyre at the Variante Villeneuve caused him to spin out of the race with 12 laps to go.

It marked a frustrating end of Verstappen’s race after the Dutchman had managed to pass Valtteri Bottas eight laps earlier following a close battle with the Mercedes driver.

Red Bull F1 boss Christian Horner explained after the race that the team suspected Verstappen had hit some debris due to the instant nature of the failure.

“We think that he's hit some kind of debris or something, because he was on the radio to his race engineer at the time and boom, the tyre suddenly went,” Horner said after the race.

“So it suggested something that has just caused a totally instantaneous puncture, and that was the result of it.

“Very, very frustrating, particularly after he managed to pass Valtteri, and it felt like today we had pretty decent pace. Annoying not to get that P2 today.”

Verstappen had jumped from third on the grid to run second through the opening stint after passing Lewis Hamilton on the opening lap, and was the first of the front-runners to pit in a bid to put pressure on race leader Bottas.

Mercedes responded by stopping Bottas one lap later, but opted to keep Hamilton out longer, allowing the British driver to get the jump on both Bottas and Verstappen once he had pitted.

Horner said it was impossible for Red Bull to cover off both strategies given it only had one car in the fight at the front.

“You're in a strategy sandwich at that point,” Horner said. “If you go for the undercut, they can go longer with the tail car, and you can't cover both options. You have got to pick the one that you want to try and beat.

“We actually picked to try and beat Lewis, because we felt that Valtteri on new tyres would also have the pace after after a stop, but his pace wasn't great.

“He was making a lot of mistakes, and that allowed Lewis to close into within a pitstop window, then they didn't take it. Then they got to traffic, and then the VSC came out and he had a free stop.”

Bottas had been struggling with damage on the floor of his Mercedes car since the second lap of the race, picking up debris from Sebastian Vettel’s Ferrari.

It left Bottas struggling to match Hamilton’s pace and unable to pull a gap to Verstappen, before eventually losing second place after making a mistake at Rivazza and running wide.

Horner said that Bottas brake tested Verstappen in an attempt to keep the position, but the Red Bull driver opted to use DRS and wait until the Variante Tamburello to complete the overtake.

“We were aware of the damage that Valtteri was was managing, and that obviously gave Lewis a pace advantage as well,” Horner said.

“That made it even more important for Max to put him under pressure, get a mistake, which he got.

“I was just talking to him, and he said Valtteri basically gave him a little brake test, which is fair play, in that corner where he made the mistake and nearly went up the back of him.

“But he was patient enough to come onto the straight, and then use the DRS and pass him into into turn two. At that point, things were looking good.”

Would Hamilton have won at Imola without VSC fortune?

Russell: Imola crash the biggest mistake of my career