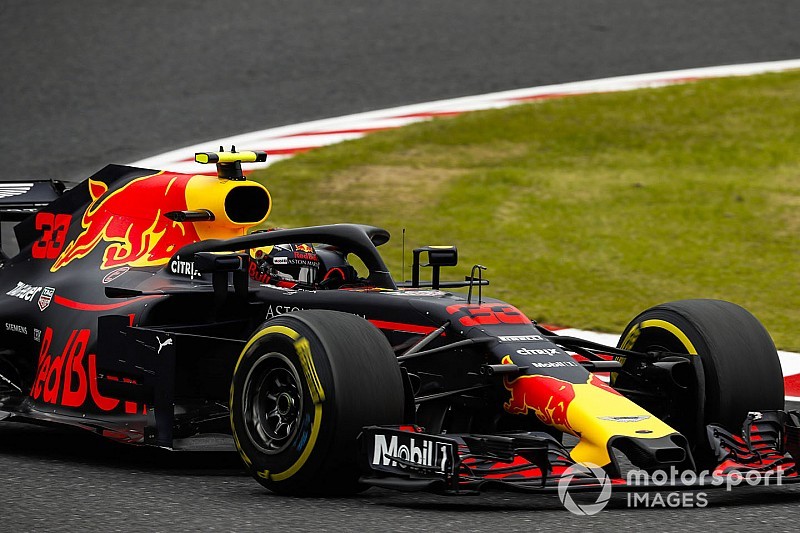 Max Verstappen called Japanese Grand Prix practice on Friday “one of my worst this season” and said he did not enjoy “one lap” in his Red Bull Formula 1 car.

Verstappen was fourth fastest in FP2 at Suzuka, splitting the Ferraris, but trailed the Mercedes of Lewis Hamilton by a second.

He told his team over the radio that it felt like "rallycross" in his sliding car and made it clear after the session he was unhappy.

"[It was] one of my worst this season in terms of feeling in the car, no grip, and around here you need to be confident in how you attack the corners," said Verstappen.

"Today there was not one lap when I felt good in the car."

Asked if he did not enjoy Friday, Verstappen said: "No, not at all, not one lap."

Verstappen outpaced teammate Daniel Ricciardo by two tenths of a second despite only having Renault's Spec B engine in his car instead of the Spec C he will run the rest of the weekend.

However, Verstappen said: "But I'm still not happy with the car. It doesn't really say anything for me."

Verstappen ran a skinnier rear wing to try to get more top speed and said "maybe the compromise is better, but so far I didn't feel good".

Red Bull will assess whether to increase downforce levels for Saturday but Verstappen could not pinpoint the exact reason for suffering "a lot of oversteer" .

While Verstappen cut a frustrated figure, Ricciardo was less concerned after hitting traffic on his fastest lap.

"I don't think I was as unhappy as him," Ricciardo said. "We had different downforce, he tried less wing, I tried bigger.

"On one lap there's probably not that much difference with the wing, but in the longer run seemed like I was more happy and consistent.

"For me, short runs we can improve I think, the long run I think we got probably the maximum out of it."

Ricciardo also pointed out that the threat of rain could be an important factor for Red Bull's chances.

Red Bull struggled in wet qualifying in Hungary earlier this year but was more competitive in Belgium's rain-hit session.

"Hopefully if it rains tomorrow we can have some good pace and fix some of the inconsistencies we've had in the wet this year with the car, and hopefully she's friendly," said Ricciardo.

Verstappen explained on Thursday at Suzuka that Red Bull discovered a "massive cross-weight [the balance of weight across the front tyres] in the car" after qualifying in Hungary that could not be changed because of parc ferme conditions.

"When I was turning to the right, I was massively oversteering," said Verstappen.

"When I was turning to the left, I had massive amount of understeer in the car, so it was really out of balance. It was like more than 40kgs, so not just a little bit."