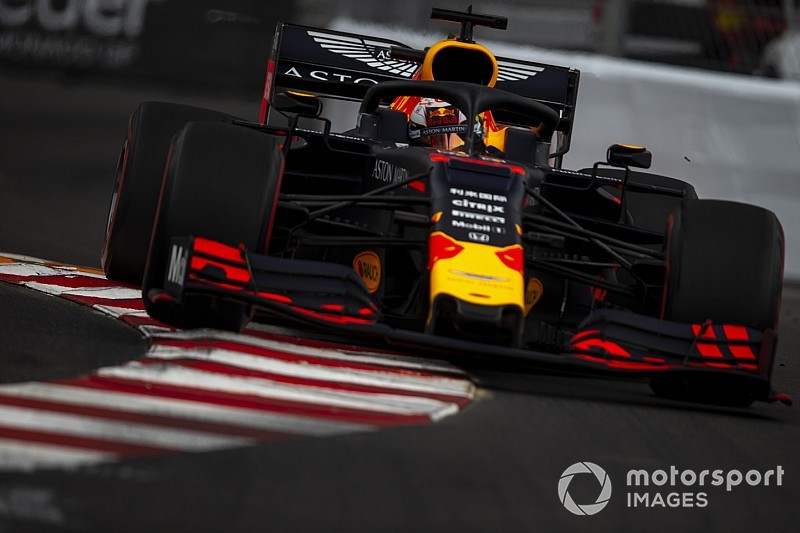 Max Verstappen was left stranded in sixth place in FP2 in Monaco after the Red Bull Formula 1 driver suffered a debris-induced radiator leak early in the session.

The Dutchman lost tracktime while the damaged item was replaced, and having been second-fastest to Lewis Hamilton in the morning session, he completed just 17 laps in the afternoon – fewer than half of the total of his main rivals.

Despite the lost time, Verstappen remains upbeat about his prospects.

“It was OK, I think we’re still quick,” he said. “In the second practice when everybody of course went onto their second set we had a radiator leak, some debris flew into the airbox and damaged one of the radiators, so we had to replace it. But in general, it’s alright.”

Verstappen managed to return to the track late in the session, having taken advantage of the enforced break to try a set-up change, which he flagged in a radio message as having cost him grip.

“We did a set-up change while changing the radiator, to see if it works or not, and it didn’t work. I know if we go back to the other set-up it will be alright.

“They only broadcast of course the negative things at the end. Of course you try different things in practice, some work, some don’t.”

Verstappen remains confident that Red Bull can be the second-fastest team behind the two Mercedes drivers in qualifying, but he doesn’t expect to be close enough to challenge the silver cars.

“I don’t think we can really put the pressure on. I think if we can be third in qualifying, then we’re doing good.

“Of course Mercedes is a bit too quick. We should definitely fill up the gap between second and third.”

“FP1 was a bit difficult, but then after we made some changes for FP2 and I felt a lot better in the car, so this was positive," Gasly said.

"We can see that Ferrari, we're in the fight with them, Mercedes is quite a long way ahead of us but we'll have to work and see what we can extract on Saturday.

“But think overall was a positive day, just a shame we could not get more running with Max, but I think we still have more performance to get out of the package we have on Saturday.

“I still feel we can improve a bit the car we have, but no, I feel really confident, we all know that it's all about qualifying and the starting position here, so hopefully we can find a few extra tenths for Saturday.”