Max Verstappen has no answers for his Red Bull Racing Formula 1 team’s lack of pace in qualifying in Singapore – and is pessimistic about his chances of progressing in the race.

At a track where many expected Red Bull to shine, Verstappen earned fifth in Q1, fourth in Q2 and fourth in Q3, 0.6 seconds behind Ferrari's polesitter Charles Leclerc.

“Of course I’m disappointed with the result,” the Dutch driver said. “At the moment I don’t have a clear answer on why.

“Yesterday [Friday] felt alright, but not amazing. Some corners we were lacking and we couldn’t really explain why. Today [Saturday] we couldn’t make the gains like we wanted to compared to Mercedes and Ferrari.

"Clearly that hurt us in qualifying. If you ask me why, the balance was alright, but just not enough grip on some corners I guess.

“I think the last sector was pretty OK, but even when driving I felt there was more potential, but just couldn’t use it.

“I haven’t looked to the data yet where we were losing, but I can pretty much imagine where it was, and it’s been like that the whole weekend. We just didn’t have enough grip on four wheels.”

Verstappen downplayed his chances of progressing in Sunday’s race, in which he'll start behind Leclerc, Lewis Hamilton's Mercedes and Sebastian Vettel's Ferrari.

“I don’t know, to be honest starting fourth is not very promising of course to try and win the race, but let’s see what’s going to happen tomorrow," he said.

"I think we are more dependent on what happens in front of us. I don't think we really have the speed to attack. You actually saw yesterday that things didn't go that well with us during the long runs."

Albon deficit down to experience

Singapore was the first proper qualifying battle between Verstappen and his new teammate Alex Albon after the drivers took penalties in Spa and Monza.

The rookie, who admitted that he struggled on his first visit to the track, was 0.6s off Verstappen in Q3, ending up sixth, behind the second Mercedes of Valtteri Bottas.

“It’s OK, it’s not great though, and I would want to be doing better than that,” Albon said. “The track’s not easy, it’s one of the tracks with the biggest gaps between drivers in a general sense.

“To be honest through qualifying it was a little bit of a lack of experience really, I think. The car went away from me a bit all through until the last run in Q3 and we did a couple of changes and it went a lot better.

“It’s not easy, this track is bumpy and just the way to drive the car, it’s tricky out there. Confidence does take a while to build up, especially on this track.

"Even my [Friday] crash was a bump. It’s part of the learning experience. You can see it, the Mercedes are always bouncing around everywhere.” 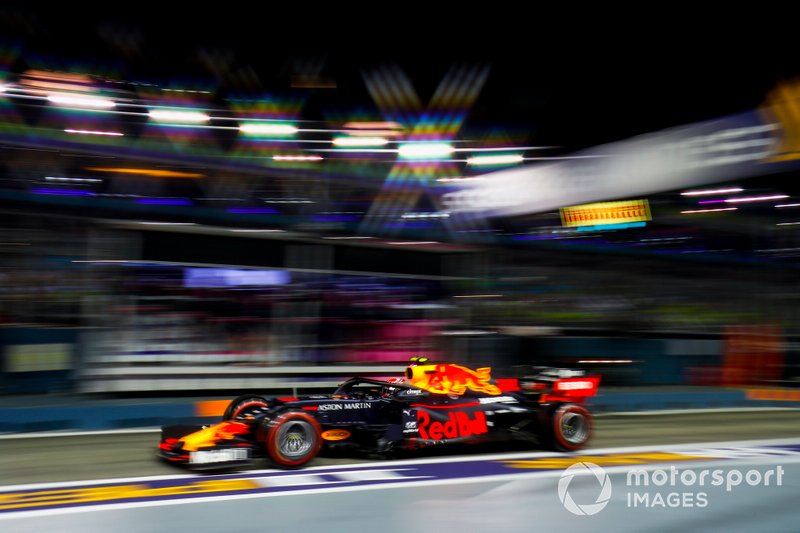 Revealed: The changes that transformed Ferrari in Singapore