Max Verstappen and Lance Stroll have both escaped punishment after the FIA's Formula 1 stewards reviewed their collision in second practice for the Portuguese GP. 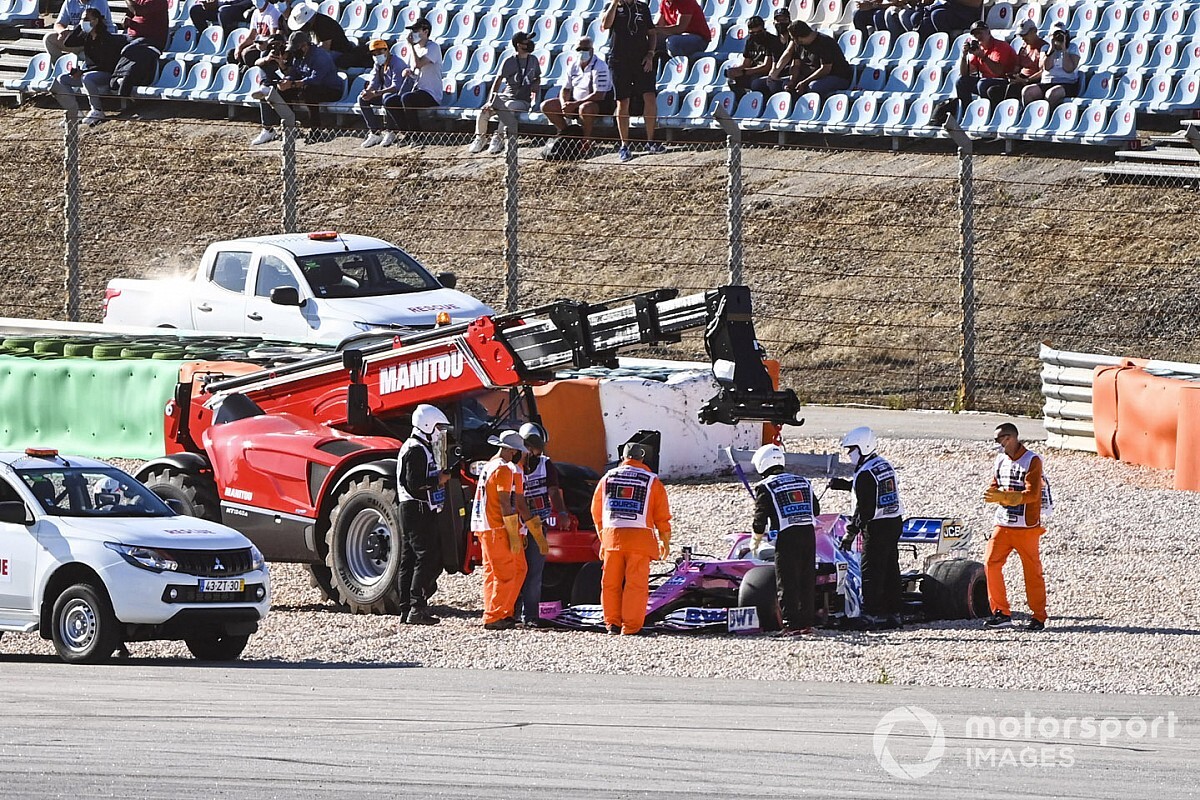 The collision happened after Stroll passed Verstappen close to the end of a hot lap. The Dutchman got a tow from the Racing Point and moved inside to pass it on the run to Turn 1, but was not aware that Stroll had been told to do a second consecutive flying lap.

Stroll duly turned in at Turn 1 and was pitched off the road by contact with Verstappen's right front wheel.

Racing Point's radio confirmed that Stroll was told to "keep pushing" as he started his second flying lap. Having come to a halt in the gravel the driver told the team that he hadn't seen anyone.

The stewards found that both men could have helped to avoid the contact that pitched Stroll into the gravel, and that "neither driver was wholly or predominantly at fault".

"Stroll was on a fast lap and was allowed to pass by Verstappen on the lap preceding the incident," the stewards said.

"Given the information from his team and usual practice, Verstappen assumed that Stroll would back off for the next lap and moved to overtake along the main straight.

"However, Stroll was instructed by his team to go for a second flying lap. Stroll assumed that Verstappen would have backed off to gain a gap between them, also in line with usual practice, and so was not looking for the overtaking Verstappen.

"The drivers agreed in the hearing that the incident was the result of a misunderstanding between them and that with hindsight, both could have contributed to avoid the incident.

"The Stewards therefore find that neither driver was wholly or predominantly at fault and take no further action."

Prior to the hearing, Red Bull team boss Christian Horner defended Verstappen in an interview with Sky's Johnny Herbert, although he eventually conceded that the situation was "50:50".

"You've got to go back to the previous lap," he said. "Lance is going into that last corner, Max has let him go because he wants to take a tow. He's assuming that Lance is obviously finishing a lap, he's not aware he's going for a second lap.

"So he's let him past, he's tucked up behind him, as I think he did with [Valtteri] Bottas in Sochi, taking the advantage of the tow, towed up alongside him, assuming that he's going to back out and that he knows he's there and he's up the inside. He felt that Lance was later on the DRS.

"But if that were a race Max would have been deemed to be up the inside. And therefore, the car on the outside should have given way."

Pressed by Herbert he admitted that blame should be shared.

"I think if you look at it, you can say that both have a role to play," said Horner. "And I would say that Max is assuming that he's going to back out. He doesn't know that Lance is going for a second lap.

"We saw that Lance is looking at his dash, maybe he's not even aware that Max is there. Both sides are going to argue their case, but I think you'd probably have to say it was a 50/50. And that's it."