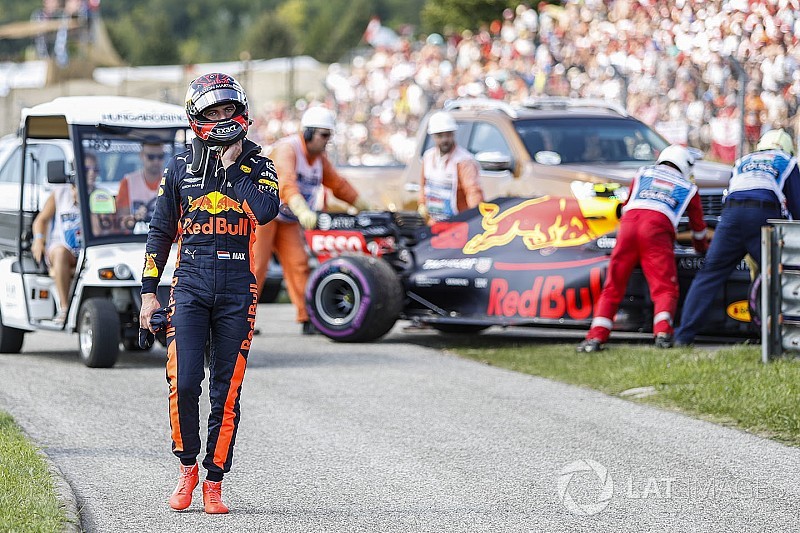 Max Verstappen says he was wrong to unleash an expletive-laden radio outburst at the Hungarian Grand Prix in the wake of the Renault engine failure that put him out.

The Red Bull driver was furious that his hopes of a strong finish at the Hungaroring were wrecked when he suffered a suspected MGU-K failure on lap six.

Although saying on Sunday night that he would have preferred F1's broadcasts not to have censored his swear words, he was in a more conciliatory mood on Monday.

Writing on Instagram, Verstappen said that while he was still unhappy about the events, he wished he had not been so outspoken in what he said.

"Looking back on yesterday the disappointment is still there," said the Dutchman. "However, I should not have used the words I did in the heat of the moment. Emotions were running high after a good start to the race.

"These frustrations came for a reason, after another unexpected engine failure which have been happening too often over the past few years.

"We came to Budapest with high expectations and not being able to be competitive made it hard to swallow for us. I will go into the summer break hoping we will be back stronger after it."

Verstappen's boss Christian Horner ramped up the pressure on Renault when he suggested that the French car manufacturer was not delivering the kind of service that the team was paying for.

But his remarks drew little sympathy from Renault F1 managing director Cyril Abiteboul, who said that his company had stopped listening to Horner years ago.

"Our bosses have stopped reading what Christian Horner is saying about us since 2015," he said.