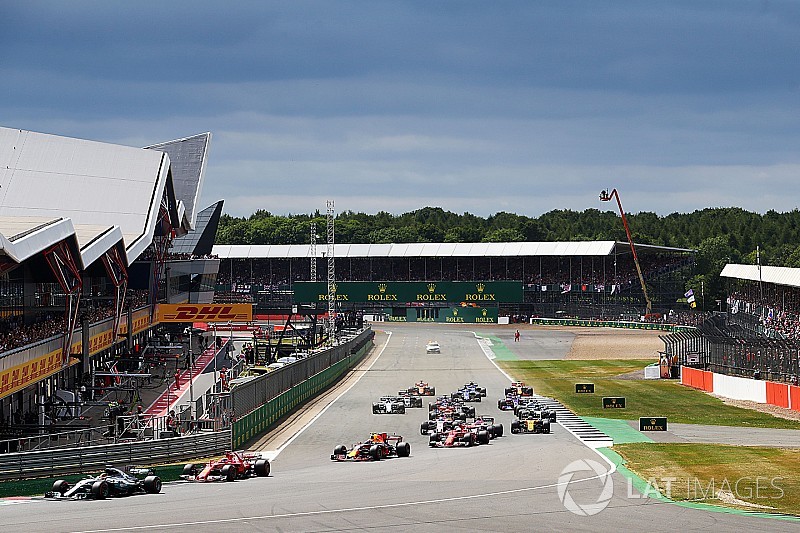 Sebastian Vettel fears the use of DRS through the fast opening corners at Silverstone could split the Formula 1 grid more at the British Grand Prix.

The FIA has added a third DRS zone that is active from the start-finish straight through to the end of the fast right-left Abbey and Farm sequence.

Abbey is a tricky right-hander without DRS and the loss of rear downforce will make the cars even less stable.

Vettel said he found it "a bit confusing" and is "not sure what the intent is".

"If anybody is likely to do it then it's us, as in the big teams with most of the downforce. So, I don't know if that was the intention to split the grid even more.

"I'm sure other people have less downforce than us, so they will probably struggle more."

"The top three teams, they're in their own world anyway, so it's not that it will change a bit in my life," he said.

"I doubt it [Renault can take it flat with DRS] to be honest. It depends on the car, it depends on how much grip that new surface has, on the wing level you run."

Red Bull has been tipped as one of the teams most likely to be able to take the turns flat with DRS activated.

Max Verstappen said "I will definitely try it" but he and teammate Daniel Ricciardo warned the extra load it puts through the rear tyres may have an adverse effect.

Ricciardo said: "It's a pretty short, sharp apex. You've just got to try and not turn in too sharp, try and talk to the car, try and tell the car that it's turning in without DRS instead of surprising it.

"If we can do it, that will be an advantage because I don't think everyone's going to be able to.

"But if we are going through there sideways and scrubbing off speed and killing the tyres then it might be slower."

Though Haas driver Romain Grosjean backs the theory it could aid overtaking into the hard braking zone of Village and the slow left-hand Loop, most think it will just be a qualifying gain.

Ricciardo thinks it will be worth between 0.1s-0.2s and Renault's Carlos Sainz believes that makes it a "critical choice".

"I don't expect anyone taking that corner flat out with DRS behind another car, that's why I don't really understand if it's been done as an aid to overtaking.

"Everyone will close the DRS in race trim before that corner. It will not help much overtaking. I expect it has just become a bit of a challenge for qualifying more than a race trim."