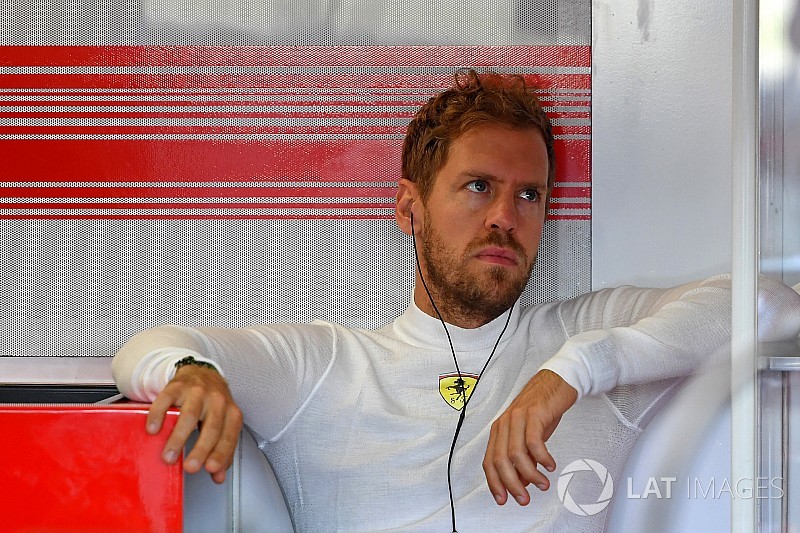 Vettel sat out the final minutes of FP3 after what Ferrari described as a neck "nuisance", which cost him a last qualifying simulation.

He will start the race at Silverstone from second on the grid after missing out on pole to Lewis Hamilton by less than half a tenth of a second.

Asked if he thought he could take pole, Vettel said: "To be honest this morning no, I wasn't sure if I could do qualifying.

"The last lap I was happy with it, seemed to lose a lot of time in the straights so I was missing a bit of tow but I think it was very close.

"I was happy with second and it gives us a good chance."

Vettel admitted his neck aggravation meant qualifying "wasn't the most enjoyable session" but played down its impact and any concerns for the race.

"It's nothing dramatic, the session was fine," said Vettel. "We had to call it a bit earlier this morning than I would have wanted but it was fine.

"I don't know what happened, but it was a bit stiff. We loosened it up. I'm not worried [for the race] because the speed will be less than qualy."

Vettel was quickest after the first runs in Q3 and found more time in the final sector of the lap, but was bested by Hamilton in the other two sectors.

That ended in what Vettel called "practically the same lap", which made identifying where he lost pole difficult.

"I was pretty happy with the first run in Q3, I knew I had to give a bit more in sector three, which I think I got right on the second attempt, but I seemed to lose a little bit down the straights," he explained.

"I'm not sure why. I set two laps that were identical, half a tenth you can always argue you can find time somewhere, I think he was just a little better on the final runs.

"I'm confident we can be faster tomorrow, you've seen today were able to pick up pace and the race is usually a bit better for us."

Vettel's Ferrari teammate Kimi Raikkonen set the fastest first and final sectors of qualifying on his final attempt to steal third, but a slightly poor middle sector cost him a chance to topple Hamilton.

"I had a small moment on the first run so I took it a bit easier [in the middle sector]," said Raikkonen. "I was still gaining but I'm sure there were places to gain [more]."

Hamilton says pole lap was one of his best ever