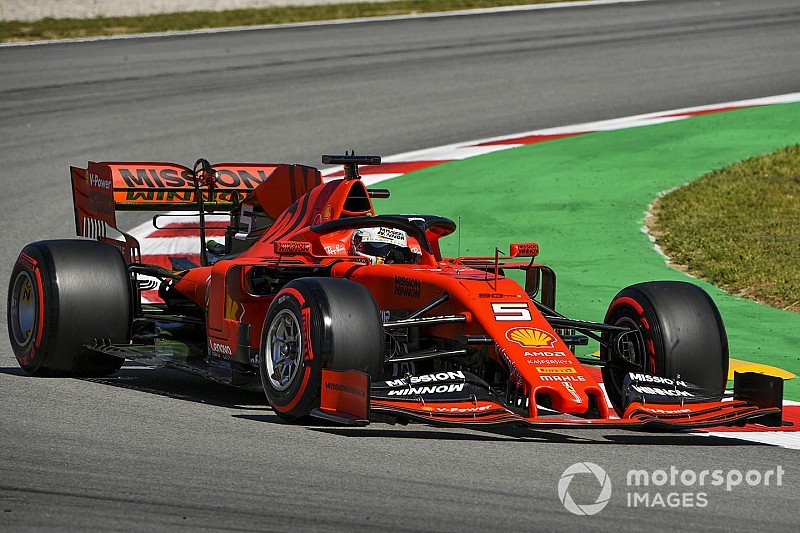 Sebastian Vettel says Ferrari is still trying to understand its cornering deficit to Mercedes and that his team trailing its Formula 1 rival in Spanish Grand Prix practice was “a fair picture”.

Vettel was fourth-fastest in second practice, fractionally slower than teammate Charles Leclerc, but both Ferraris were more than three tenths behind the pace-setting Mercedes of Valtteri Bottas.

Ferrari has introduced an upgraded engine at Barcelona but was losing time in the final sector of the lap, which features more slow corners.

Asked if he was looking to gain time in the final sector to fight Mercedes, Vettel said: “We have to. It’s not the first time this year we’re losing in these sort of corners.

“If it was easy we’d just fix it. But currently we’re working very hard and still trying to understand why we are losing out in these type of corners sometimes more than other times.”

Vettel admitted he was “not as happy” as he wanted to be after Friday practice and that the result was “not really a surprise”.

“I think engine-wise we’re happy,” he said. “It’s Friday, so it’s a bit difficult to know what we are doing compared to other people.

“Car-wise, we put everything on that we expected to put on the car. Feeling-wise, it’s a different story. It’s a fair picture that we haven’t been the quickest today.”

Leclerc agreed that the car’s performance was not optimal, describing it as “a bit out of the perfect balance”. However, he felt that sorting the balance of the car would be an “easy fix” for Saturday.

“It doesn't scare me,” he said of the deficit. “Obviously I would have preferred to be three-four tenths ahead but at the moment it's that way.

"We are trying to work on the car, on the balance especially. I think we will win a bit of time tomorrow. Whether it will be enough time or not I don't know, we'll see.”

Mercedes’ performance left pace-setter Bottas particularly bullish about his team’s efforts at the end of Friday.

“The car felt really good today, completely different to how it was in winter testing, and it seems like our cornering performance has improved,” he said.

“The balance around the lap is also better, so it looks like we've taken the right direction since the winter.”