Vettel: Ferrari had "way less grip" than in testing 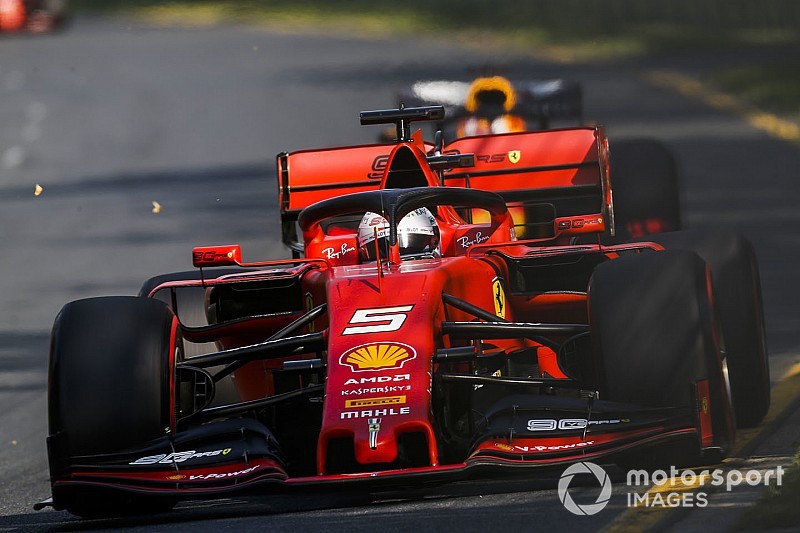 Sebastian Vettel says his Ferrari Formula 1 car had "way less grip" in the Australian Grand Prix than it did during pre-season testing at Barcelona.

Vettel and Ferrari entered this weekend's 2019 season opener as the early favourites after a strong fortnight of testing at the Spanish Grand Prix circuit in which Vettel set the benchmark time.

But Mercedes' Lewis Hamilton was fastest in all three practice sessions then 0.7 seconds faster than third-place starter Vettel in Saturday's final part of qualifying, which prompted Vettel to declare Ferrari "should be better than this".

Vettel was able to stay with Hamilton - who was jumped by teammate Valtteri Bottas at the start - in the early part of Sunday's race, but fell back in his second stint and was passed by the Red Bull of Max Verstappen.

He went on to finish fourth, just ahead of teammate Charles Leclerc but 57 seconds behind Bottas.

"If you want to be fair, then way less grip," said Vettel, when asked what was different about the Melbourne weekend compared to testing.

"In Barcelona we were very happy with the car right from day one.

"The balance was right, the car was responding to what I was asking it to do. I had a lot of confidence.

"All weekend, summing up, I didn’t get that confidence that I had in Barcelona so I didn’t have the car underneath to play around. It wasn’t doing what I was asking.

"There were glimpses here and there that were really strong, and I think our performance in some corners was really good.

"But the majority of corners it wasn’t. That’s why we were slower than other people and lost out yesterday as well as today."

Vettel was the earliest of the frontrunners to stop on lap 14 of 58, but said he has less confidence in the car after switching from the soft compound to the medium.

Asked if he had stopped too early, Vettel said: “Initially I thought yes, but to be honest the whole second stint on the medium tyres wasn’t very strong.

"The first stint I was fairly happy, maybe a bit the opposite to Charles, but the second I was not.

"At this point, I’m not sure why but I’m sure there is a reason so we need to get a little bit deeper and have a good look, but clearly there was something going on.

"I didn’t have the same trust and feel in the car that I had in the first stint so I was struggling with overall pace throughout the second stint and obviously at the end I was struggling really with tyres.

"So, arguably yes we were a little bit early in the box, [but] on the other hand there were other people stopping at the same time as us that didn’t struggle that much in the end.

More from the Australian GP: