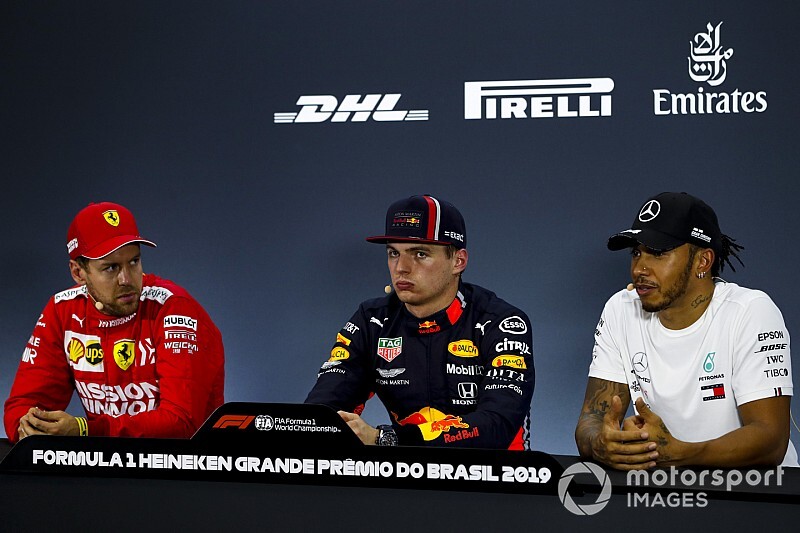 Verstappen will start Sunday’s race at Interlagos from pole position after dominating qualifying in his Honda-powered Red Bull, which Ferrari driver Vettel claimed was not losing any time on the straights.

Red Bull has been underpowered throughout F1’s V6 turbo-hybrid engine era and its new-for-2019 partner Honda has been playing catch-up since it joined the grid in 2015.

However, after being defeated by Verstappen’s latest strong qualifying performance, Vettel said: “We have to admit that we were beaten fair and square today.

Vettel’s own team has been under scrutiny in recent weeks for its engine performance advantage, particularly in qualifying.

Verstappen even alleged after the United States Grand Prix that the absence of Ferrari’s usual top-speed edge was a direct result of an FIA technical directive that stated ways to exploit fuel-flow rules would be illegal.

Another technical directive was issued ahead of this weekend’s race, reminding teams of previous instructions outlawing burning oil for performance gains and asking them to submit lubricant information to help ensure nobody is breaking the rules.

Reiterating his surprise at Red Bull’s performance, Vettel said Ferrari is in the same spec as previous races and he does not know why the competitive picture is different in Brazil.

“We’ve seen a lot of qualifying sessions when we were always a bit faster than everyone on the straights and losing a bit in the corners,” said Vettel.

“But today Max and Alex [Albon] were as fast on the straights. That’s about it. I don’t know why. We didn’t do anything different.”

Hamilton, who wrapped up his sixth F1 title at the previous race, said he did not “fully understand” why Red Bull was so fast at Interlagos.

Asked by Motorsport.com if he shared Vettel’s surprise, the third-place qualifier said: “Of course. We didn’t expect to come here and see [this].

“On top of that, they're quickest in the middle sector, so they’ve obviously still got the same amount of downforce, but more power.”

Verstappen downplayed his speed on the straights, pointing out Red Bull was not quickest in the final sector, which comprises a full-throttle blast on the 1.2km stretch from the penultimate corner to the finish line.

“Last year we were quite good here,” said Verstappen. “But I think this year we made a step forward.

“We learned from our mistakes in some recent races and we came back stronger and everything's working well.”

Hamilton: Mercedes "down on power" against Red Bull, Ferrari