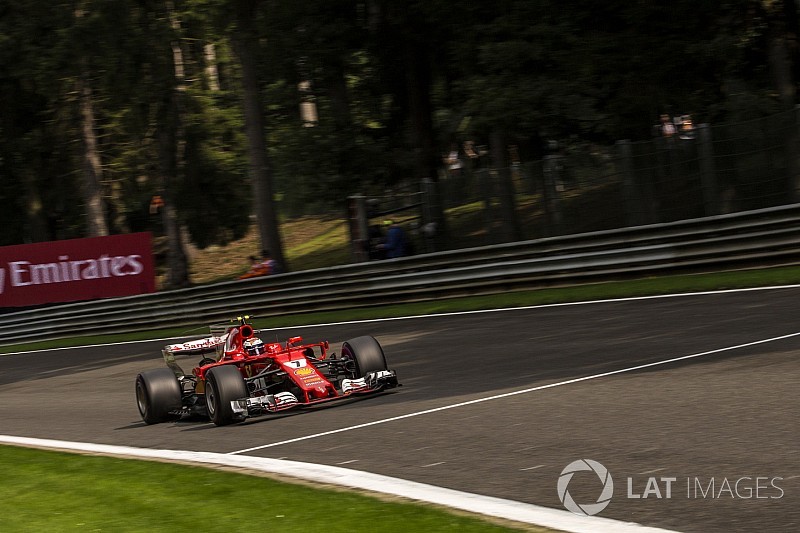 Ferrari driver Kimi Raikkonen says it was his decision to help out teammate Sebastian Vettel with a tow in the final qualifying segment at the Belgian Grand Prix.

Raikkonen had looked the stronger of the two Ferrari drivers throughout the weekend, as he headed Vettel in all three free practice sessions and was ahead after the first runs in the final qualifying segment.

But the Finn "went sideways" midway through his last Q3 effort and aborted his lap, instead giving a tow to his teammate.

Vettel ended up on the front row, alongside the Mercedes of Lewis Hamilton and half a second up on Raikkonen, who was demoted to fourth by Valtteri Bottas.

"I had a mistake, I was coming back. If I can help our team, I will do it," Raikkonen said.

"It cost me nothing because i was coming in the pitlane. I knew he was behind me, so I speed up and try to help him on the straight.

"It’s as simple as that. There is no other story behind it."

Vettel, for his part, insisted the tow from Raikkonen was in the plans, calling it a "spontaneous" decision by the Finn.

"As far as I understand, he had a mistake on his last flying lap, his last attempt," Vettel said.

"He obviously wanted to finish that lap but I guess, when he did the mistake and because of where we were positioned, when he cruised to the pits - I guess the team didn't tell him anything, I guess he saw a red car in the mirrors and thought 'I would hand him a tow', which was quite nice and obviously quite useful for me.

"It wasn't planned. I saw some other teams playing around with tows, previously in qualifying, but usually it is one of those things that you can't plan, so you tend to stay away from it.

"I think it was very spontaneous."

The German said his Ferrari SF70H felt significantly better on his final Q3 lap, but conceded that the tow from Raikkonen was a big help in seeing off Bottas for second place.

"I had a little bit light front end, especially through sector two with the medium-speed, high-speed corners," Vettel said.

"I was lacking a little bit of response, but the last lap the car was more alive, immediately I could feel it turning into Turn 1.

"Also I admit I was a bit lucky with Kimi, who had to abort the lap, and he gave me a very, very nice tow - which I think made it a bit more comfortable with [beating] Valtteri."

Regarding Ferrari's battle with Mercedes, Vettel has talked up his outfit's chances – as he suggested that his car has again looked stronger on race runs than over one lap.

Asked about the long-run pace, he said: "So far it has been looking pretty good, so I hope we can keep it up.

"The car on one lap, I thought all weekend it's a bit trickier to get it all together - consecutive laps, high-fuel, I felt really good, so let's see what we can do with strategy tomorrow as well.

"For sure Mercedes will be quick, but we don't have to hide, we're on the front row for a reason, we have the speed, and we should have it as well in the race."

The real differences: Hamilton vs Senna vs Schumacher vs Alonso