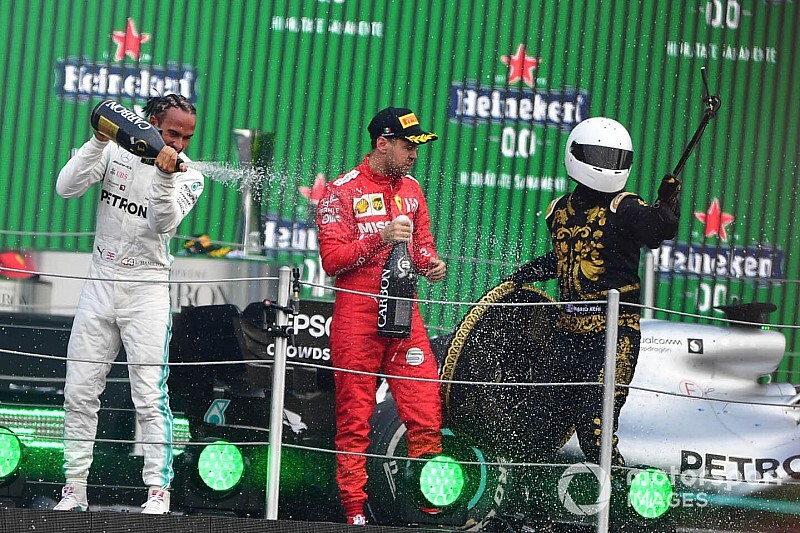 Sebastian Vettel has praised the innovative Mexican Grand Prix Formula 1 podium but was not a fan of the "shitty" trophies or "the selfie guy" he snubbed a photo with.

The Mexican GP podium ceremony takes place in the Foro Sol stadium section and this year a lift was constructed to include the victorious car, with Lewis Hamilton rising up to the podium alongside his Mercedes while Vettel and Valtteri Bottas stood on the rostrum as normal.

Throughout the week the Mexican GP has featured vibrant representations of the culture in the paddock and the top three were joined on the podium by 'Mario Achi', effectively the race's mascot, who tried to take a selfie but was pushed away by Vettel.

"I think it was cool," Vettel said of the ceremony. "I didn't like the selfie guy when he tried to push into the picture so I pushed him away! I'm not big into selfies anyway.

"It was nice, to elevate the car as well is really cool. It's a very nice way to do it to involve the whole stadium and the crowd.

"I liked most of it except the selfie guy and the trophies. It's a shame. You have such a great race and they put so much effort into the race and then you get this shitty trophies that look boring."

Vettel has previously been critical of sponsor-based trophies and longs for a return to specialised trophies rather than ones that are too corporate.

"We could have for the future maybe something nice, traditional Mexican, because it's a bit of a shame," said Vettel. "There's Heineken written everywhere! You don't need to have the fricking star on the trophy as well.

"Get something nice like they had when F1 used to race here before we came back."

On the use of the winning car as part of the podium furniture, Vettel added: "It doesn't fit everywhere. Here it makes sense."