Looks like Ferrari boss Luca di Montezemolo has an eye on German super champion Sebastian Vettel. It's not a question of 'if', but 'when'...

"If, tomorrow, Fernando would withdraw for any reason - let's say he moves to Hawaii with his girlfriend - then I would want Vettel," laughed the fabled Maranello based team's president, according to Auto Motor und Sport.

Spaniard Alonso, however, is tied up contractually for years -- and Ferrari is more than happy with him.

"He is more than just a driver." 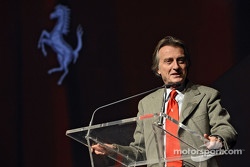 Referring to Ferrari's influential past drivers Niki Lauda and Michael Schumacher, Montezemolo said Alonso is "a bit of both".

But he also doesn't spare his praise of German Vettel, who while contracted to Red Bull has been the subject of long speculation his future could be in red.

"He's young," Montezemolo started, "he has his feet on the floor, and he has an indomitable will to win.

"Schumacher made me aware of him years ago because he knew him from his karting years. I must say, Michael was right."

Montezemolo admitted Vettel, 25, is higher on Ferrari's wish list than is Lewis Hamilton.

"Because he is younger, and because Ferrari would be Hamilton's third team. And if you've reached your third team, your career is already in its second half."

Indeed, Montezemolo said he doesn't even mind that Vettel accused Ferrari of playing "dirty tricks" in a bid to beat him to the 2012 title.

"In the heat of battle," said the Italian, "you can always say something emotional."

Montezemolo, however, appeared to rule out pairing Alonso with Vettel, saying that sort of star-studded lineup would be "difficult".

For now, that keeps Felipe Massa in a job, even though Montezemolo hinted he is keeping his eye on the next generation of potential Ferrari drivers.

He suggested he will be watching Sergio Perez, Nico Hulkenberg and Romain Grosjean very closely.

"Next year, we have two and a half new driving pairings: Perez at McLaren, Hamilton at Mercedes, and the half is the 'new' Massa with us.

"I am very curious to see how Hulkenberg goes with our engine at Sauber, and also the young man who on the first laps this year was sometimes a little too fast," Montezemolo smiled, undoubtedly referring to Frenchman Grosjean.

Was Grosjean's contract renewed by Lotus due to ROC victory?

Ferrari: F1 engine gains may not be known for four more races