The upgrade package trialled by Aston Martin Formula 1 driver Lance Stroll in Portugal will also be run by his teammate Sebastian Vettel in the Spanish GP this weekend.

The Silverstone team gave the latest set of new parts to Stroll first as it tries to accelerate the development of the difficult AMR21.

After an encouraging qualifying session, Vettel had a frustrating Sunday in Portugal. He made Q3 for the first time since the British GP last year, eventually taking 10th on the grid, while Stroll had issues in Q1 and started 17th.

However, the German couldn't maintain that form in the race, slipping down to 13th, and finishing a place ahead of Stroll.

"I have a couple of bits coming for next weekend," said Vettel. "And hopefully we can be a bit more competitive. A clean Saturday obviously will be the key to have a better Sunday. But I hope that in the race trim, we have a bit more pace to put more pressure.

"It seemed obviously that we did not have the pace like the AlphaTauris, and especially the Alpines. So yeah, we need to have a look. But ultimately, we were not quick enough."

Asked if the new parts had performed as expected on Stroll's car, he said: "I think so, obviously I haven't felt them. I don't know. But I hope that it's going to be a better weekend.

"This weekend we also fought a little bit with set-up so I hope for a more straightforward weekend the next one, and better pace, especially Sunday afternoon."

Vettel said the team made the right call in giving the new parts to Stroll initially.

He added: "Obviously he felt a lot more comfortable straight away with the car compared to me. We're still learning about the car.

"I think obviously it's going to be a long season, but these couple of races now are very crucial to get on top of it. We're still changing a lot of things one session to another to explore the limits."

By Matt Somerfield and Giorgio Piola

The upgrade revolves around the floor and diffuser, the area where the team feels it has lost out most this season thanks to the new aero rules.

At the front of the floor, the team has optimised the design of its 'wavy' floor, with an extra wave section added ahead of the main floor scroll section.

This smaller wave (red arrow) appears to have taken some of the real estate away from the main floor scroll. However, it should help deliver the required effect further upstream, resulting in a net gain. 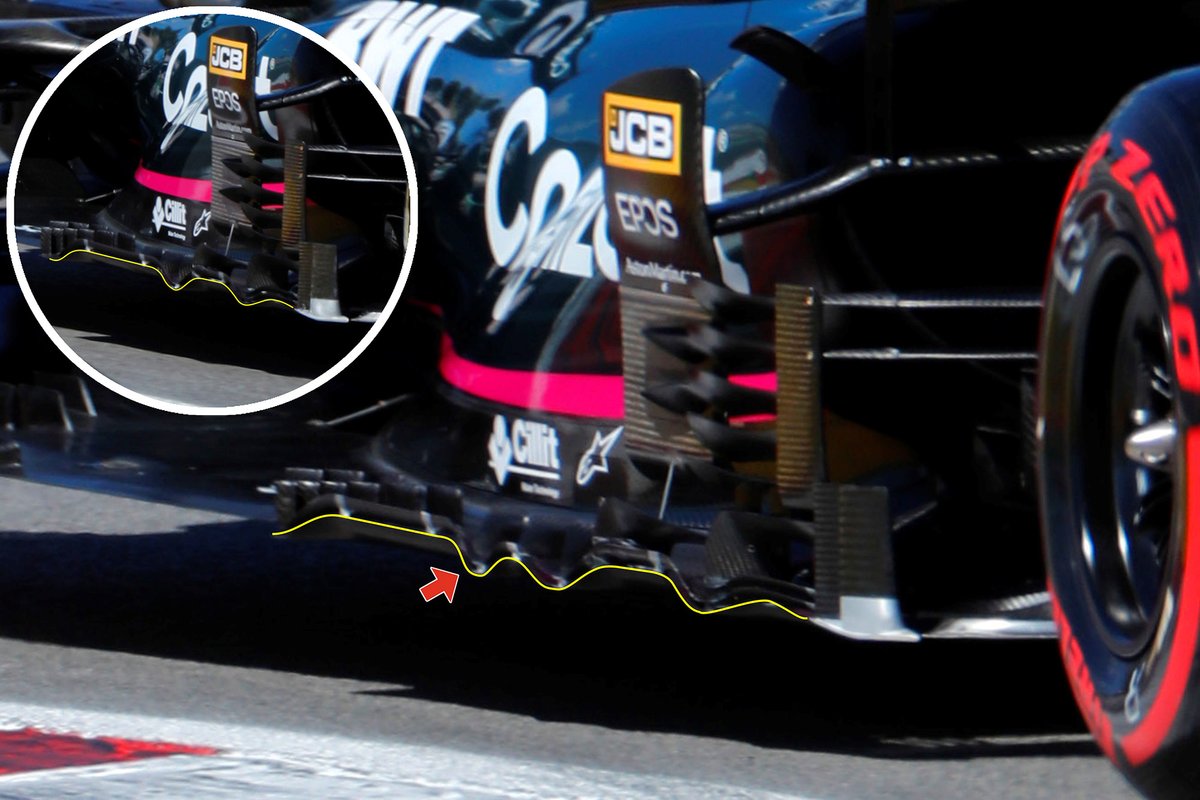 The introduction of this more complex wavy floor follows the development behaviour of Mercedes, who are the other team currently using this design methodology to extract performance from the front corner of the floor.

With teams no longer having the ability to place slots and fully enclosed holes in this region of the floor, it has forced a rethink of the airflow's behaviour, and these waves appear to allow the high pressure flow from on top of the floor to engage with the low pressure beneath the floor in a similar way. All of this adds up to dealing with the wake created by the front tyre. 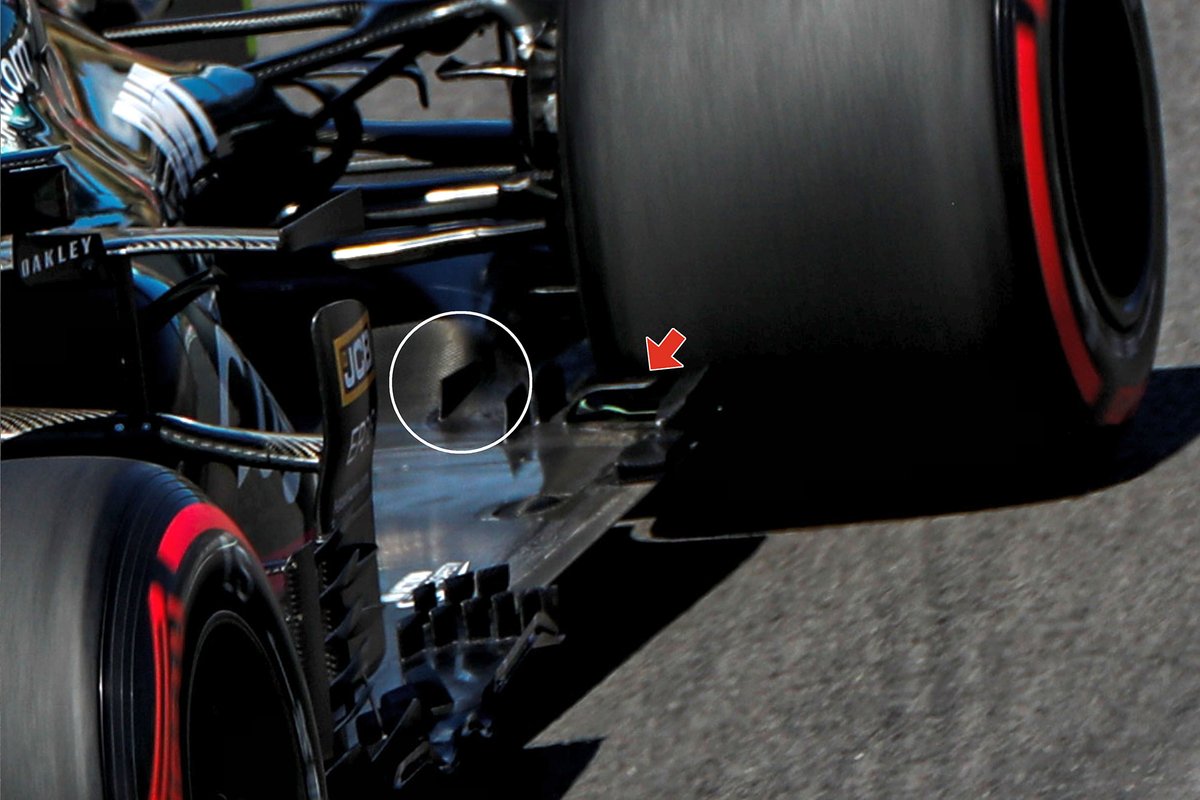 Aston Martin has also made changes at the rear of the floor too, as an extra vane arches over ahead of the rear tyre (red arrow).

This will have an impact on how the airflow is turned across the rear tyre and into the channel beside it.

These fins, strakes and vanes on the floor are critical in altering the flow in this channel as they can reduce the turbulent flow off the rear tyre which, if not managed, is ingested by the diffuser and reduces downforce.

In line with this, the team has also made a change to the shape of the diffuser ramp (circled). 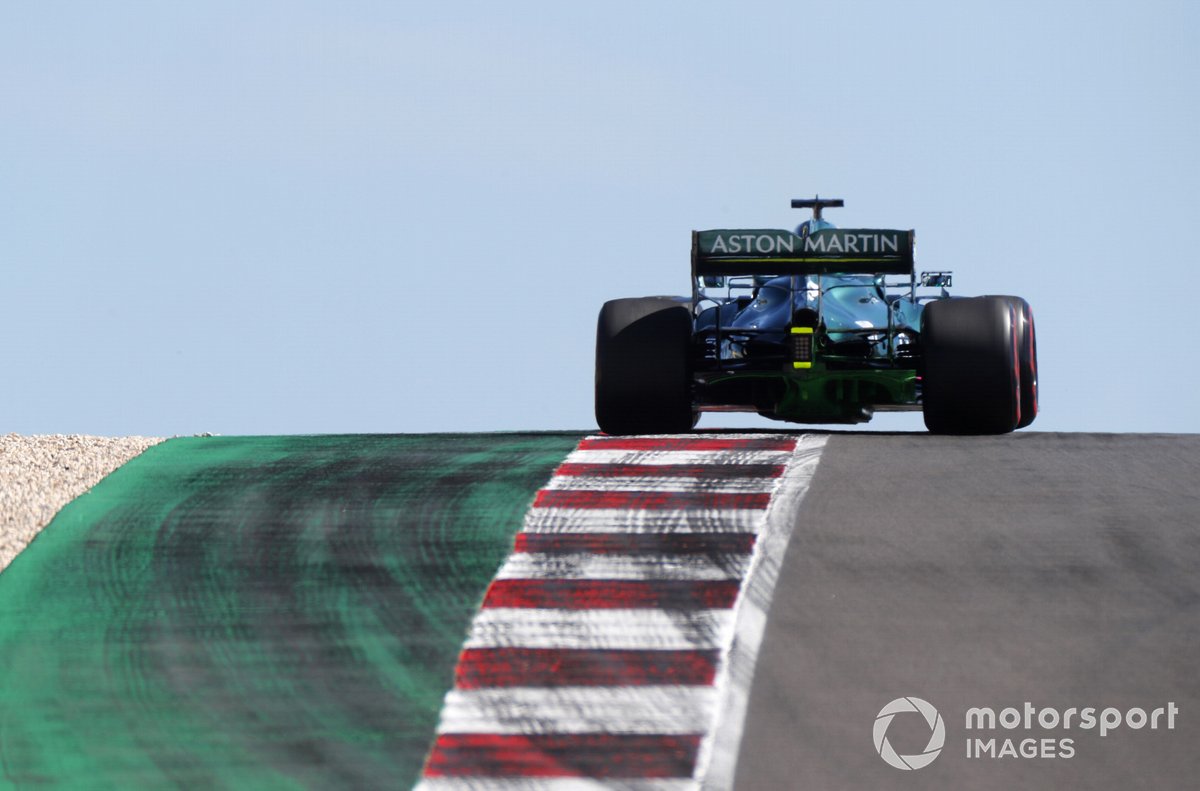 The team ran flo-viz paint on the underside of the diffuser during some of its runs on Friday to get visual confirmation that the upgrades are operating as expected and the work being done back at the factory is on track.

The new tyre construction and lower minimum tyre pressures that have been introduced by Pirelli for 2021 has also been a headache for the teams, as it requires them to optimise the performance of the car around new parameters.

This has not only had an impact on how the tyre is brought into the temperature window but also the performance of the car front-to-rear, with the front tyre a little less responsive and requiring the driver to work them harder this season.

As a response to these challenges, Aston Martin opted for an asymmetric brake duct design last weekend, with the left-hand side of the car having the outer blanking plate on the drum removed, whilst the right-hand side has a groupings of teardrop shaped outlets near the inner shoulder. 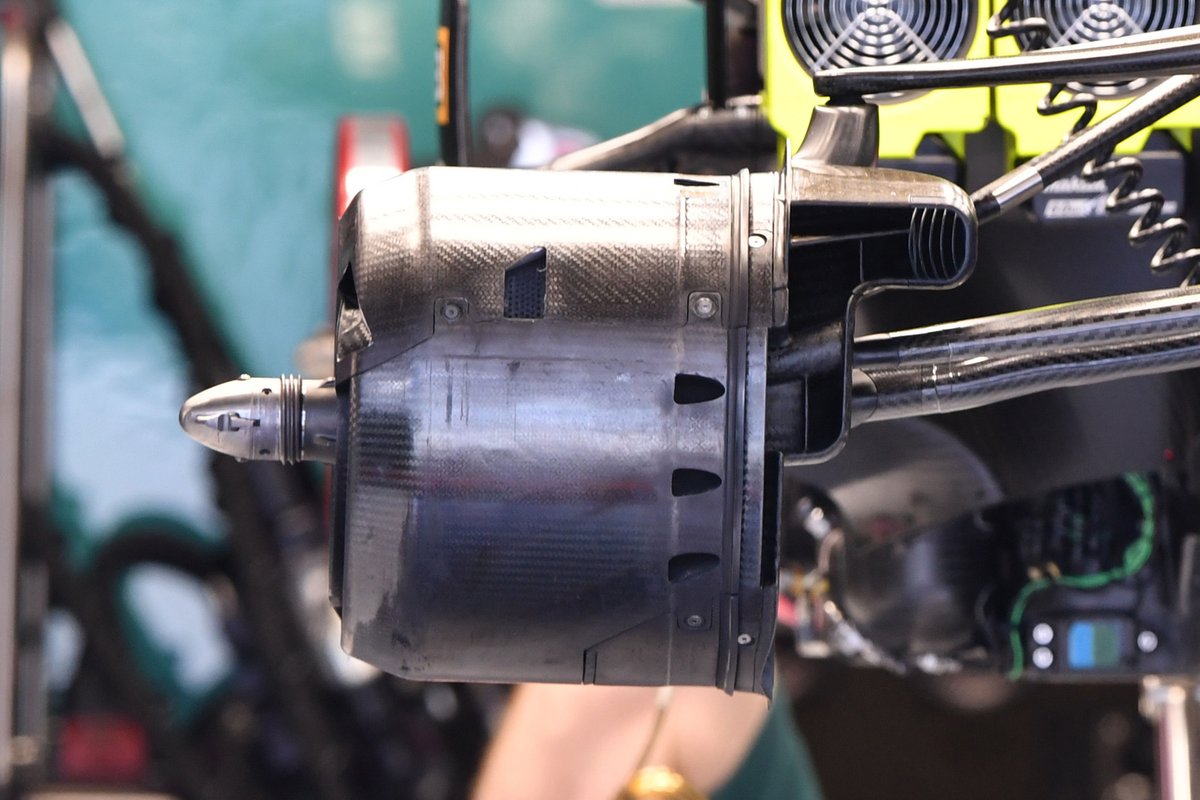 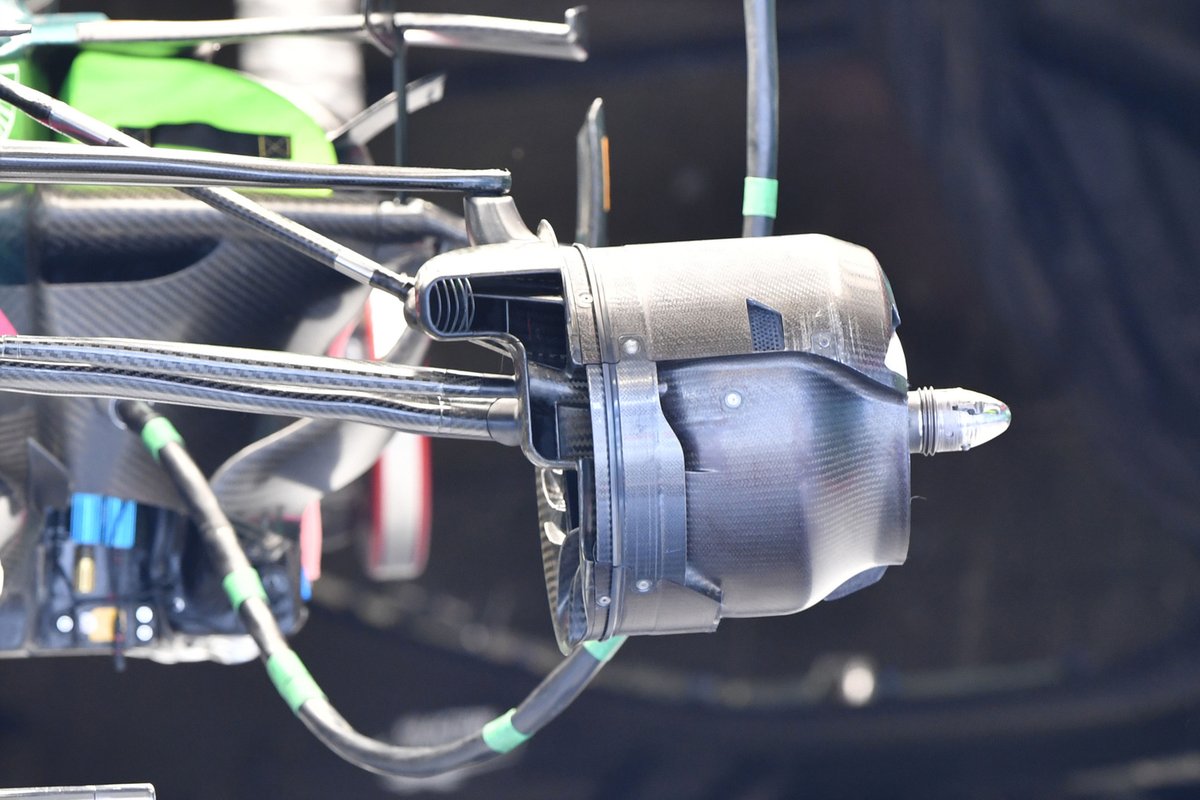 These different designs tailor the position and quantity of heat that's radiated from the brakes into the wheel rim and consequently raises the core temperature of the tyre.

The changes that Aston Martin made on Stroll's car come hot on the heels of a dramatic upgrade the team made at Imola. 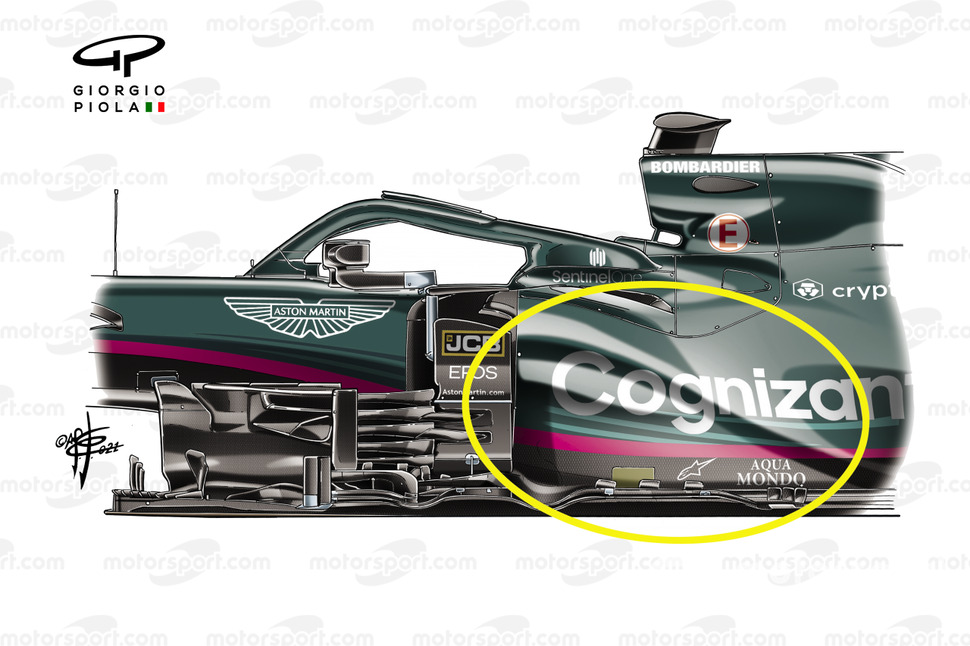 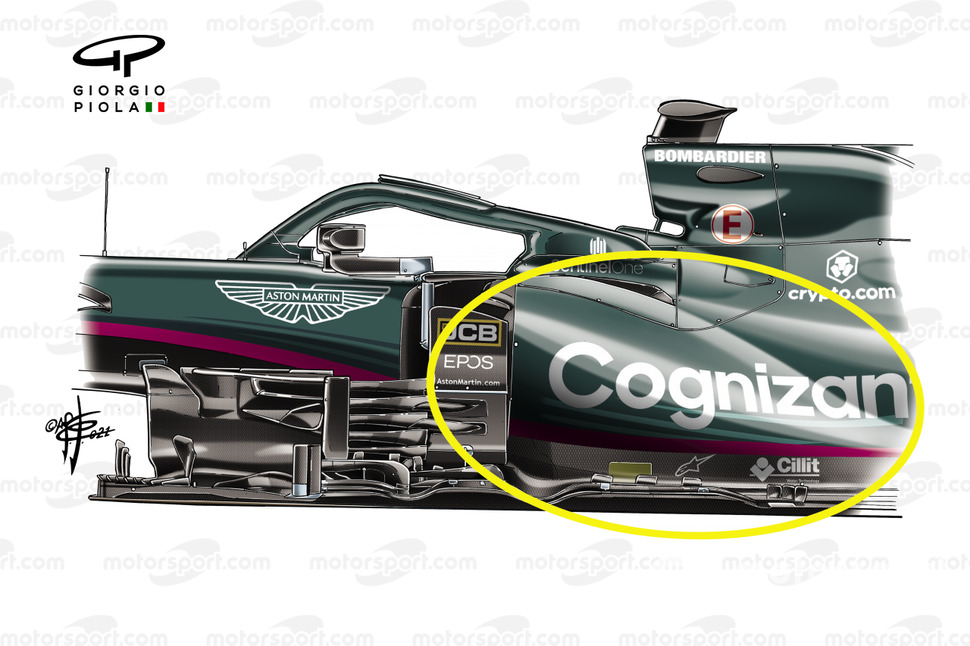 The AMR21's sidepods were the focus on this occasion, with the team not only shrinking the size of the inlet but also revising the downwash-style bodywork to improve the flow over the rear of the car.