Jacques Villeneuve didn't have an easy season when he returned to F1 full time with Sauber last year, but the former champion aims to win again with the team in its new incarnation of BMW Sauber. The German manufacturer officially took over the ...

Jacques Villeneuve didn't have an easy season when he returned to F1 full time with Sauber last year, but the former champion aims to win again with the team in its new incarnation of BMW Sauber. The German manufacturer officially took over the Swiss outfit in January and presented its new car, the F1.06, in Valencia this week. Villeneuve is eager to race it. 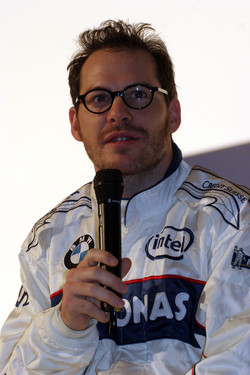 "I just love competition, if it wasn't in Formula One then I would be competing in something, not necessarily racing," the Canadian said at the launch. "Whatever I do there's always an element of competition and I think that's where I get my motivation from."

"The main thing to prove is to win a championship and that's been done," he added. Villeneuve won the title with Williams in 1997. "If I am still racing, it's because I want to win again. I enjoy competing and when you enjoy competing the main thing is to try and win."

Sauber was eighth overall in the 2005 constructors' standings and the car was not competitive enough to challenge the front runners on a regular basis. Villeneuve's best finish was fourth at Imola, although the disqualification of the BARs elevated him to that position from sixth.

"I just think we weren't doing enough mileage," Villeneuve said about his difficulties last season. "Our winter testing was not conclusive because we didn't do a lot of mileage and the test where we were going to concentrate on set-up work got snowed off."

"Then with the two races per engine rule and only two cars, you didn't drive much on the Friday (of race weekends), or even on the Saturday, you just did the minimum number of laps to choose a tyre. You didn't really work on set up."

BMW took its time to confirm Villeneuve as a race driver for 2006, which led to much speculation about his future. "I'm used to it, I've had years of practice," he shrugged off the media scrutiny. "You learn not to read what's written about you, it's better not to. When you're working hard and there's no problem internally, I don't really care what's written."

Villeneuve has a one year contract whereas teammate Nick Heidfeld has a three-year deal. BMW motorsport director Mario Thiessen would not be drawn on whether Villeneuve may stay on in the future and said 2006 was the focus for the moment. In last year's results Heidfeld was some way ahead of Villeneuve but Jacques knows its not always as clear cut as it looks.

"You always get judged on the end result on paper next to your teammate but that's not always the truth of what happened during the season," he remarked. "If you're in a car that can win races then you can have a true comparison to your teammate."

"If you are in the midfield or the back, then sometimes one lucky race will give you so many points that your teammate can never catch you even if he keeps doing better races than you. So it depends where we are when we start the season. The key thing will be just to work together to make the team go forward."

Villeneuve has no problem working with Heidfeld. "You have to work together to bring the team success," he said. "It's good when you can get on with your teammate and work in the same direction instead of creating extra problems."

BMW Sauber is testing at Valencia this week with Heidfeld behind the wheel of the F1.06 the first two days and Villeneuve piloting the Sauber C24B chassis. Jacques is scheduled to get his first taste of the new car on Thursday.