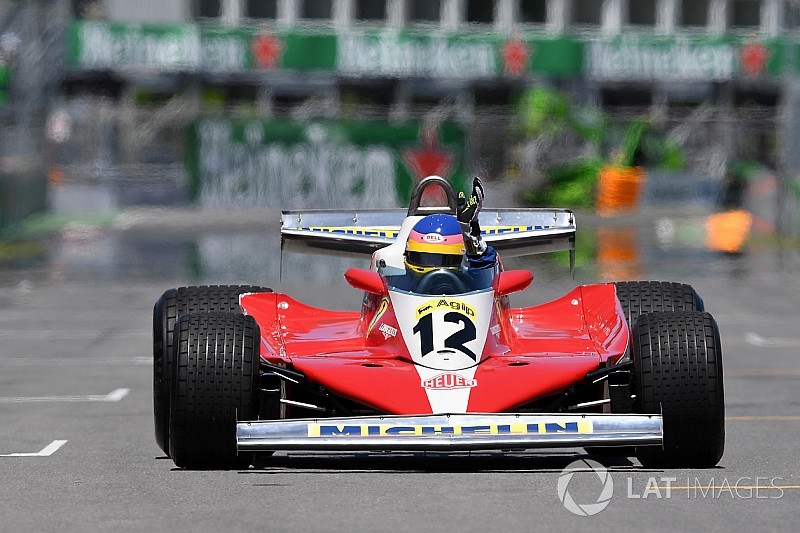 Jacques Villeneuve, the 1997 F1 World Champion, drove, at slow speeds, his father’s legendary Ferrari 312 T3 car before the start of the Canadian Grand Prix on Sunday.

In 1978, Gilles Villeneuve, Jacques’ father, drove this very car to victory in the maiden Canadian Grand Prix to be held on the newly constructed Ile Notre-Dame circuit in Montréal. That was Gilles Villeneuve’s first of his six victories in F1.

Jacques Villeneuve had only driven one of his father’s Ferraris in the past; it was the 312 T4 at the Fiorano test track in 2012.

On Sunday, Villeneuve was strapped into the tight cockpit of the T3 and drove it around the 4.4-km circuit to the delight of the several thousands of fans, his mother Joann and his sister Mélanie.

“It was really good. Yes, I enjoyed it! I waved to the crowd and I think the fans enjoyed the fact that I drove this car here today,” Jacques Villeneuve told Motorsport.com after the event.

“I couldn’t hear them cheer because the sound of the flat 12 engine was just too powerful, even at slow speeds like this. I can tell you that this engine sounds fantastic!

“The idea was for me to lead the drivers’ parade but their cars were running way too slow! I had to no other choice than to pass the two trucks that were ahead of me because the water temperature was getting a bit high. So, I went up to fourth gear on the back straight, as I needed to cool down the engine.”

Villeneuve quickly realised he needed to adjust certain driving habits he has. “I had to revert to right foot braking because the steering column passed right between my two feet. The pedal box of the [Ferrari] T4 was different and I could do left foot braking. Anyway, it was a wonderful experience, a fantastic tribute to the victory of my father here 40 years ago,” Villeneuve concluded.